After beta testing a stealthy new mobile ad product for the last 90 days, Pocket Change CEO and co-founder Ari Mir is confident that he’s figured out a way to put the consumer experience first while still offering both advertisers and developers a compelling value proposition. It’s a bold claim, given the challenges that advertising stalwarts Google and Facebook have encountered delivering appealing mobile ad experiences. But customer and advertiser feedback from early beta tests with partners including Uber, 1-800-Flowers, Reebok, and GrubHub, among others suggest that Pocket Change is certainly onto something.

After pivoting from a mobile currency to an arcade-like rewards platform approximately one year ago, Pocket Change’s now powers the in-app rewards programs of more than 500 Android and iOS apps, and has a relationship with more than 80 million mobile users, 20 million of which are active on a monthly basis. Recently, the company decided to build upon this foundation by introducing an in-app marketplace where brands can offer consumers exclusive rewards such as a credit toward a purchase at that brand’s ecommerce store. More importantly, the consumer can then redeem that reward immediately, without ever leaving the app. 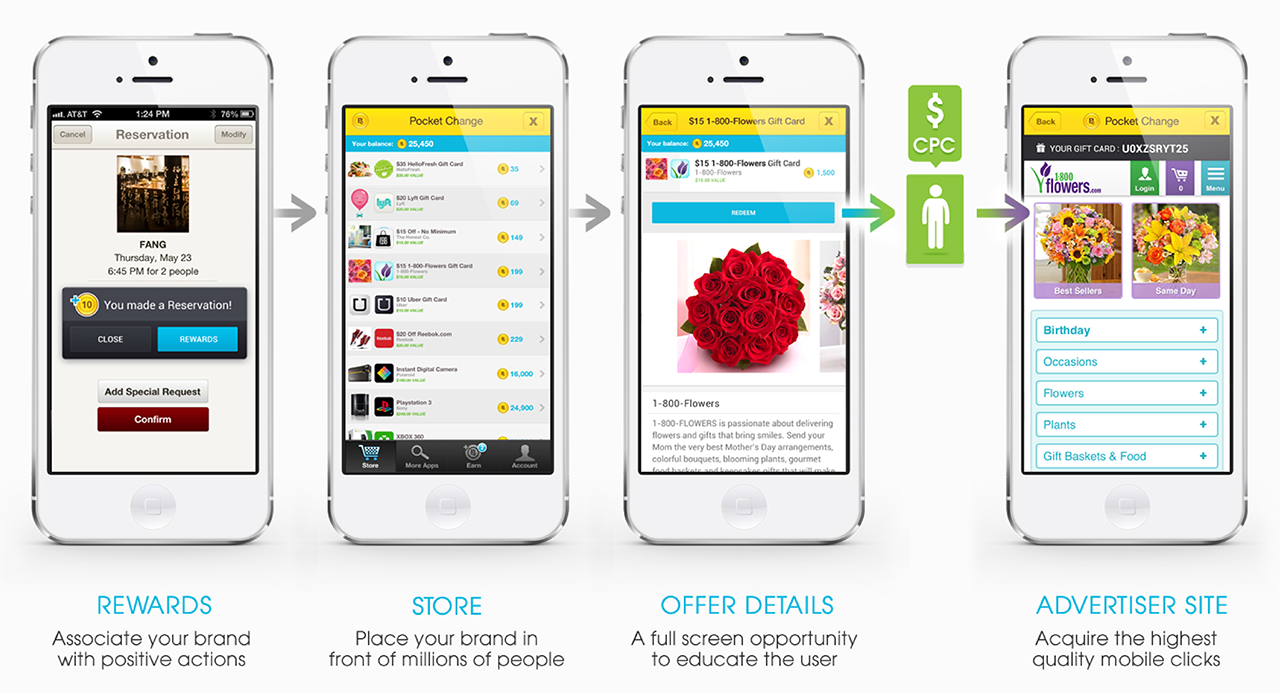 During the beta test, Pocket Change saw an average conversion rate “from click to credit card purchase on mobile” of 2.38 percent across all categories, with results as high as 3.7 percent and 2.7 percent in the transportation and home decor categories respectively. These results are impressive, given mobile advertising industry average conversion rates in the tenths of a percent.

For consumers, Pocket Change is a way to receive genuinely valuable rewards for playing their favorite games or utilizing productivity-focused apps. The company’s audience is 53 percent female and 58.2 percent between the ages of 18 to 34, with near equal representation of the 13 to 17, 35 to 44, and 45 plus demographics. All users must first opt-in to participate in the platform, and according to Mir, “The number one question users ask is ‘What are more ways we can earn Pocket Change?’”

For developers, the platform offers an opportunity to increase engagement and thus to drive additional monetization through additional advertising or in-app purchase revenue. Mir claims that Pocket Change increases user sessions per month by 20 percent on average, and lifts retention rates by an average of more than 30 percent. Pocket Change also drives free installs to in-network apps, thus removing the need to turn to paid installs market and potentially cannibalizing the business of firms like Tapjoy, Flurry, and Google’s AdMob. The company does this without offering users incentives, but rather through simply displaying for users, “other places to earn Pocket Change.”

Finally, Pocket Change’s model addresses a number of issues that brands face when evaluating alternative mobile advertising products. First, the very act of a user choosing among multiple available rewards is an expression of clear purchase intent, making that consumer a highly valuable lead. Further, by encouraging the consumer to redeem the reward immediately in-app, Pocket Change solves the common problem of un-redeemed rewards which typically plagues the category.

Given these factors, brands have expressed a willingness to give Pocket Change the rewards free of charge and also pay cost-per-conversion (CPC) advertising rates for each user acquisition. The big innovation was in figuring out how to make money when people spend pocket change, Mir says, calling Pocket Change “the first opt-in, intent driven mobile advertising product.”

Pocket Change, which was founded in Los Angeles in 2011 but has since relocated to San Francisco, has raised a total of $6.5 million over two rounds of funding. The company’s backers include Google Ventures, First Round Capital, Baroda Ventures, Scott Banister, David Sacks, Mike Jones, Kamran Pourzanjani, and Alan Braverman.

While the latest iteration Pocket Change is a unique idea, it is one that appears easily duplicated (or at least approximated) by a number of competitors, not the least of which are Facebook and Google. The startup has a head start and a respectable network of publishers and mobile consumers from which to build its ecosystem, but this is ground that can be covered quickly by the largest and most well funded competitors.

It’s still far too early to suggest that Pocket Change has “figured out” mobile advertising, although Mir certainly believes this to be true. It is reasonable, however, to acknowledge that the company has created an incredibly compelling offering that at least initially, seems to appeal to the three key constituents of consumers, advertisers, and publishers (developers). Whether the company can maintain this level of appeal and harmony among its various audiences remains to be seen.