The drones are coming: The view from dystopia

This is Part 2 of PandoDaily’s “Dispatches from the future” series where we share prognostications on what may lie ahead. We encourage readers to share their predictions in the comments or email the writer at [email protected] with ideas for their own guest posts, which PandoDaily might publish.

Drones aren’t just for killing “enemy combatants” and nearby innocents, with a band of rubberstamp judges appointed by conservative Chief Justice of the Supreme Court, John Roberts, providing flimsy legal cover. These flying robots (or “unmanned aerial vehicles”) engage in a wide array of activities. They patrol farmers’ fields and monitor crops planted on steep hills. Some engage in surveillance on the US border and act as eyes and ears for the police in cities like New York, while journalists have begun to make use of them.

Many take to the sky, but drones also swim and roll over land. Underwater they inspect oil rigs and seek sunken treasure and on terra firma the iRobot Roomba vacuums your floor. Drones go on search-and-rescue operations and are being tested to deliver dry cleaning and Domino's pizzas. DARPA, the Pentagon’s pie-in-the-sky research arm, has been working on all sorts of unmanned vehicles, including one called Anti-Submarine Warfare (ASW) Continuous Trail Unmanned Vessel that would incorporate artificial intelligence and skim over oceans to track enemy subs. There’s an entire hobbyist community, founded by former Wired magazine editor Chris Anderson, dedicated to do-it-yourself drones. Soon you may be able to make your own at home with a 3D printer.

It’s not surprising that criminals and terrorists have begun to embrace these robotic jack-of-all-trades. In an essay in Time, titled “Criminals and Terrorists Can Fly Drones Too,” Marc Goodman, founder of the Future Crimes Institute, reports that a drug cartel working with a resistance group in Colombia designed a remote-controlled drug-smuggling submarine to smuggle a ton of cocaine at a time more than 1,000 miles without refueling. Two years ago the FBI foiled a plot involving an al-Qaeda operative who planned to attack the Pentagon and Capitol with a remote-controlled drone carrying explosives. One enterprising sort piloted a drone over prison walls in Brazil to deliver cell phones to prisoners, while another used one to drop drugs to inmates in the UK.

Unmanned, remote-controlled, or programmed flight is not new, of course. Ballistic missiles and torpedoes with tracking sensors have been around for decades, and your grandfather might have played with a model airplane that he controlled from the ground. Actually they go back further than that. In 1915 Nikola Tesla imagined an armed, unmanned flying vehicle defending the United States, and in a demonstration in 1919 Elmer Sperry, inventor of the gyroscope and airplane autopilot technology, dispatched a pilotless aircraft to sink a captured German ship. During World War II, militaries in both the US and Germany began dabbling in drones, which were really just remote-controlled planes. They became more common during the Vietnam War and by the early 1990s were viewed by the Pentagon as a cost-effective “force multiplier” for missions that are, as one Air Force captain put it in 1991, “characterized by the three Ds: dull, dirty, and dangerous.” After 9/11 they were transformed from surveillance vehicles into combat machines, used to hunt and kill terror targets. 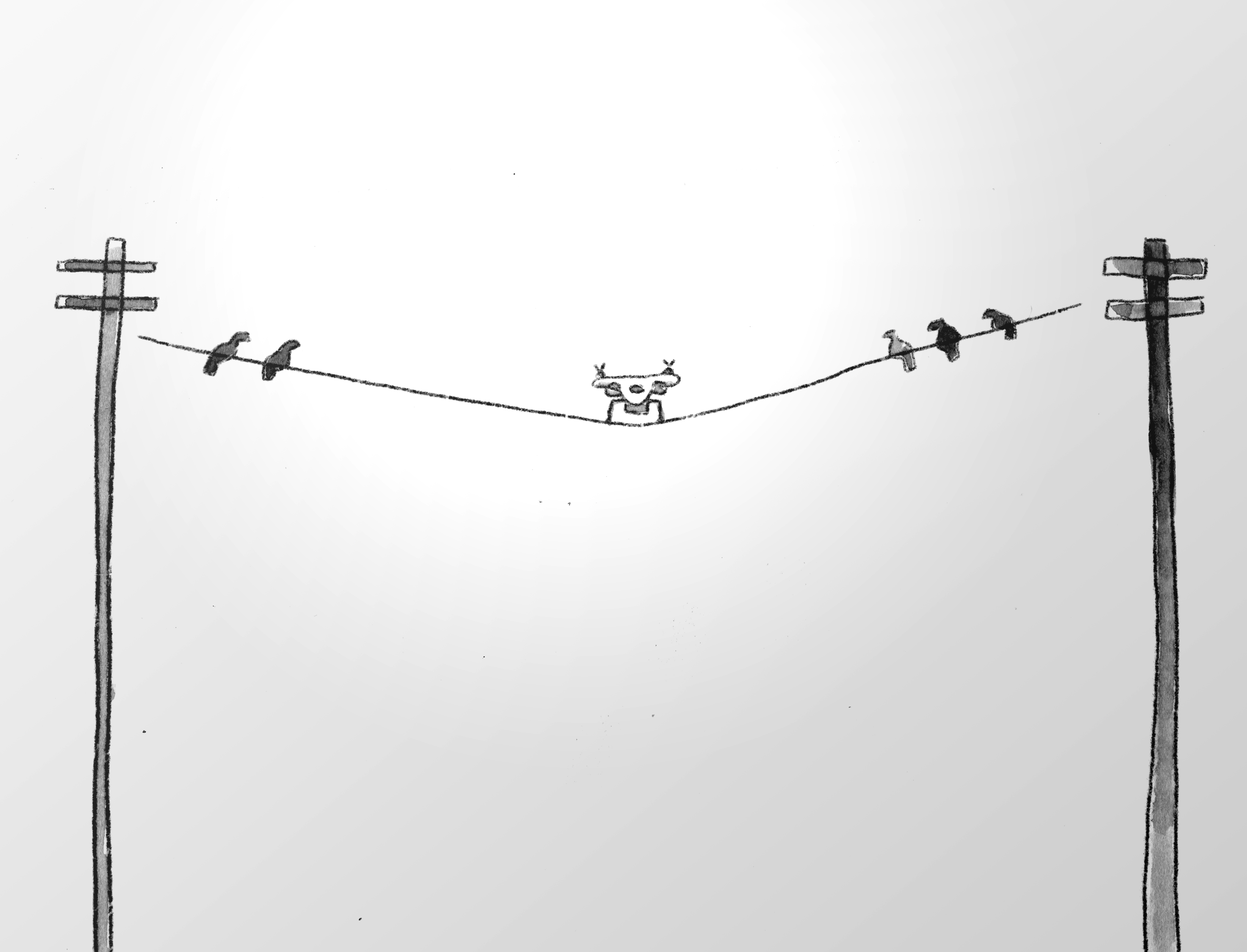 If drones follow a similar path of innovation to personal computers, they will get smaller, faster, smarter, cheaper, and far more commonplace. In 1955 there were perhaps 250 computers in the world and by 1980 a couple million. Today there are more than 1 billion, not including all those mini computers we call mobile phones that billions more tote around in their pockets and purses. Pretty soon we will be wearing computers on our faces and wrists and have them embedded in our clothes. Cameras used to be hulking, but now researchers have created a camera the size of a grain of salt that can be produced 25,000 at a time.

So what will our world look like when drones in all flavors and sizes fill the air almost like WiFi and cellular network waves do today? Imagine packs of flying robots flitting to and fro, keeping tabs on neighborhoods, pulling advertising banners like planes do over some Long Island beaches on Memorial Day weekend. See that bird on a wire? Maybe it’s not really a bird: It’s a drone with wings, dispatched there to keep an eye on something or someone. You thought it was disturbing that the NSA could sift through your phone calls, email, and Web journeys? Imagine if a drone could shadow a person’s every move from thousands of feet up. Unlike CCTVs in London, these drones could be dispatched by anyone – a divorce attorney, private investigator, gossip blog operator, jealous lover, prankster or perv.

Last month a medical student from Florida State University attached a high-definition camera to a drone and sent it on a mission over Central Florida to watch and record people. Something went awry with the circuitry and right after it was launched its operator lost control over it. The drone flew for about two hours, coming perilously close to crashing into an apartment building window and hovering over a sunbather at a pool. It wobbled over the Interstate, with drivers blissfully unaware that an unmanned drone was overhead. Finally it fell out of the sky and crashed into a tree, where an enterprising Local 6 TV news employee found it. The footage in the camera enabled the TV news crew to identify the operator, who said, "The only thing I want to do is essentially record a flight, put some music on it, and put it on YouTube." If the sky were filled with DIY drones we all might need to don crash helmets.

They wouldn't just be good for surveillance. Drones could be equipped with sensors and inspect gas or electrical lines, or detect carbon monoxide, radiation, or pollution. Why give UPS a four-hour window to arrive with your package when a drone could be programmed to track you down where you are and deliver your Amazon Prime purchase right then and there? Ordering in Chinese or Thai from a local restaurant? A drone could take your food to you, and while it's at it bring your dry cleaning, too. Your daughter forgot to bring her science project to school? Drone it to her. Maybe we'll all have our own drones to run errands for us, to pick up merchandise we've pre-ordered online – from Trader Joe's and Target to the butcher and fish store. 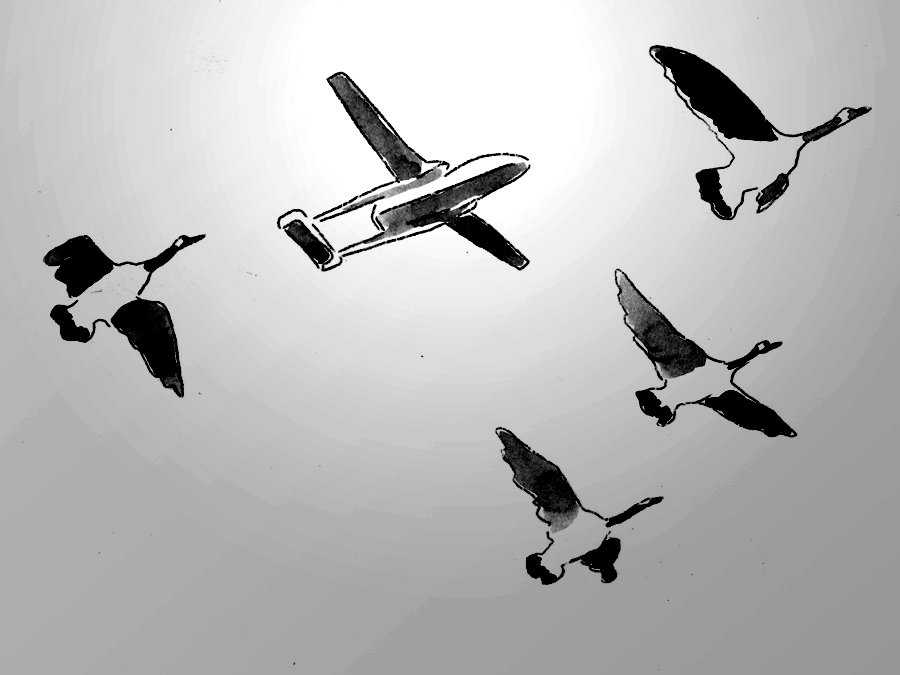 While larger-sized drones would likely be subject to FAA regulations if they want to fly over US soil -- the agency issues permits, although not everyone is waiting for one -- smaller drones would be hard to regulate. And what to make of micro air vehicles (MAVs), dubbed “bugbots,” that mimic small birds, and, according to this freaky video, could provide extended surveillance, since they take on energy from environmental sources like the sun, which means they could operate undetected for extended periods. They could swarm in teams, communicating with one another and engage in advanced decision-making capability.

“Individual MAVs may perform direct attack missions,” the narrator intones, “and can be equipped with incapacitating chemicals, combustible payloads or even explosives for precision-targeting capability.” In the video, a sneaky flying drone comes up on a target and shoots him in the head.

Conor Friedersdorf of the Atlantic [Disclosure: I taught Conor in a graduate-level journalism ethics course at NYU] wrote:

When I watch that simulation I am horrified. I also think to myself, this technology is more likely to diminish American security than to enhance it. In a world without micro-drones, our military remains overwhelmingly powerful. But what about a world where micro-drones are pervasive?

Indeed. But what about closer to home? What starts out as military technology will eventually filter down to the street. What if urban gangs were to equip drones with weaponry to target rival gang members, or a thief uses one to break into a store or someone’s home? What if terrorists, like in the plot the FBI foiled in 2011, were to release biological agents like anthrax or other deadly substances from drones flying over towns or cites? Then you’d need drones to combat other drones, engaged in a constant state of robotic warfare.

What's more, sequencing of people's DNA is becoming more commonplace and cheaper. Could a hit man steal your DNA code like a fraudster grabs your social security number, key it into a drone and send it on a search and destroy mission – all without having to leave the comfort of his home? It'd be easier than purchasing an assault weapon and doing the deed himself, and probably far less risky. Perhaps an entire drone protection industry will pop up. If so, it'll have to come up with better ways to prevent drones from identifying us than counter-surveillance "stealth ware." Cracked, that astute commentator of American culture, may be right. "Drones will soon make the future miserable."

Sounds crazy, right? Yet we are well on our way. John Horgan in National Geographic reports that “the US has deployed more than 11,000 military drones, up from fewer than 200 in 2002,” and within a generation could replace most manned military aircraft. He notes that 50 other nations have drones and “thousands of companies” are designing drones, “ranging in size from robotic moths and hummingbirds to Boeing’s Phantom Eye, a hydrogen-fueled behemoth with a 150-foot wingspan that can cruise at 65,000 feet for up to four days.”

Click here to read Part 1 of the series, “Google Glass in 10 years: The view from dystopia.”