Like many entrepreneurs, Tarikh Korula takes pride in the standard perks of entrepreneurship: He doesn't have a boss, a corporate cubicle, or a "real job." It's been seven years since he's worked in what he calls a "proper midtown office."

That changed this summer, when he moved his startup's operations, including the black pirate flag on his desk, from a studio in Brooklyn to the towering glass and steel-encased offices of The New York Times, a building which architecture critic Nicolai Ouroussoff says will "drag us -- in this case, The Times -- out of the Dark Ages." Korula's company, Mahaya, and two other startups, Delve and OpBandit, moved into the building as part of TimeSpace, the newspaper's foray into startup accelerators.

"We are literally in the belly of The Grey Lady," he says. "Just below the cafeteria."

The program is the first experiment of its kind by the owner of the country's second largest newspaper. Its goal is to infuse the 162-year-old Times Company, battered, bruised and barely profitable thanks to digital disruption, with some of that sweet innovation nectar startups are known for. In exchange, the startups get access to decision makers, lawyers, and editorial staff at the New York Times, with a little prestige and credibility to boot. The three startups, which offer various news-related tools, have spent the last four months mentoring, demo-ing, beta testing, iterating and pitching. Soon they'll "graduate." A formal pitch day will be held in September.

The unspoken hope is that the entrepreneurial spirit will rub off on the slow-moving Times Company like osmosis. That the entrepreneurs are likely taking desks made available by one of the New York Times' multiple rounds of newsroom buyouts is only slightly bittersweet.

"Part of it's just having entrepreneurs in the building," says OpBandit's Muller. "Having people around who'll raise their hand and say, 'Hey, isn't this stupid?'" He believes it's helpful for people inside the Times to see startups launch a product in three months. It provides a contrast to the slow-moving media company, which is working on its first site redesign in five years. The Times' most notable innovation this year, Snow Fall, took six months and 16 people to build. (One can only guess how many lean startups they could've built, pivoted and sold to Yahoo in that amount of time.)

TimeSpace is not The Times Company's first experiment with innovation-by-osmosis. Its R&D Lab built products like the Reveal Project, a personal data visualization project, OpenPaths, a privacy app, and Custom Times, a personalization prototype. Perhaps most lasting thing to come out of TimeSpace's R&D is News.me, which was formed via an unusual arrangement with the startup studio Betaworks. The Times Company built News.me with the agreement that Betaworks would acquire it, taking its R&D developers along as part of the deal, and finishing the app as part of Betaworks. Even though News.me didn't quite catch on, its bones live on in the new Digg, which Betaworks acquired and merged with News.me.

The Times Company has also invested in Betaworks, as well as True Ventures. It has backed startups including Appssavvy, Wordpress, Brightcove, Enigma, Federated Media, Dynamic Yield, Keep Holdings. Exits include Stamped and Indeed.com. And it has incubated two companies -- Ricochet and Cascade -- through its R&D Ventures arm, formed in 2012.

For a media company, The Times Company is a fairly active investor. It's clear the company recognizes the need to speed things up. Since it has become common in the last year for news organizations is to have an accelerator programs, it seems natural that the Times Company would jump on that bandwagon. BBC Worldwide, Turner, the Boston Globe and the Philadelphia Inquirer all run some version of an accelerator.

One major difference between TimeSpace and most accelerators is that there's no money involved. Even though the Times does have an investment fund, it isn't backing Mahaya, Delve and OpBandit companies as part of the program. Typically The Times Company strikes Series A deals alongside co-investors. That may change, though. "We've made them realize there is a whole seed investing world out there and they might want to participate," Korula says.

They're not getting money, but the startups are getting more than just a fancy office. They have had front row seats to the inner workings of the Times' newsroom. For example, the companies got a glimpse of the paper's prestige and its essential role in society within a few weeks of joining: Each year when Pulitzer prize winners are announced, the Times' news staff gathers around its open balcony to announce and congratulate its winners. This year the Times won four Pulitzers; that celebration was interrupted by the Boston Marathon bombings. The TimeSpace companies watched as reporters quickly sprung to action on the breaking news event. 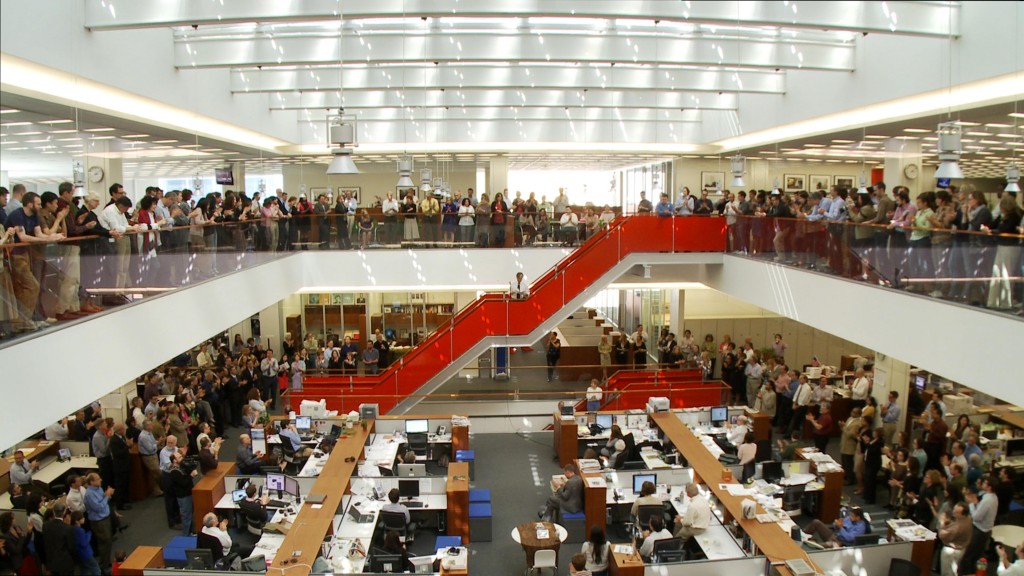 From a practical standpoint, learning about how a news room operates has helped OpBandit to tweak the user interface of its product, Muller says. Likewise, Delve discovered a white label use for its social news reader while in the program and underwent a site redesign with input from Times execs. A number of people within The Times Company are now using Delve as beta testers, co-founder Andrew Whalen says.

Mahaya, which pulls in social media feeds to create rich stories, learned just how high the bar is to partner with a media organization like the Times. From the wording in the contract, to the rights to the images, to the kind of data that the Times requires you share, to the appropriate cost, meeting with the Times' corporate lawyers caused Mahaya to change the way it approaches media groups, according to Korula. He was sobered by the reality that it can take two and a half years to close a partnership deal, a major blow to a hopeful startup founder. But thanks to the program, the Times used Mahaya to tell the story of its Social Media Summit in April.

We've seen this situation play out before -- big, slow-moving companies try to get ahead of the changing times by tacking on innovation. Usually it comes in the form of a corporate VC arm, a startup contest, a hackathon, or an accelerator. They throw money around thinking it'll buy them some magical innovation. By contrast, TimeSpace is a fairly humble effort, launched with just three companies to very little fanfare and with zero dollars attached.

Housing a few fast-moving startups in the belly of a slow-moving legacy business won't create automatic success for either entity. But with its modest first foray into accelerators, both sides are just hoping they rub off a tiny bit on one another.

Update: The original version of this story stated that the Times has spent five years working on a site redesign. It has been updated to reflect that the publication only recently began working on its first redesign in five years.