Hooking users one Snapchat at a time

When Snapchat first launched, critics discounted the photo-messaging app as a fad -- a toy for sexting and selfies. Their judgements were reasonable. It's impossible to predict the success of a product on day one, let alone its ability to change user behavior. But hindsight is beginning to prove critics wrong.

As Nir Eyal describes, habit-forming products must have two things: High perceived utility and frequency of use. In Snapchat's case, as with most communication services, each individual message isn't particularly valuable in isolation. But through frequent use, Snapchatters enter the "Habit Zone," instinctually turning to the product to solve their desire to communicate and feel connected with others. This key insight has enabled the company to craft an experience tailored for high engagement.

Just used @Snapchat to "write down" a long wifi password because it loads so much faster than my camera. First unexpected use.

As Jack mentions, this is far from Snapchat's intended use case but exemplifies the speed and ease-of-use of the service. Snapchat provides friction-free creation. After the app is launched, the camera is activated, encouraging instant photo-capturing. Traditional photo-sharing apps like Instagram open a feed to consume media, requiring an additional tap to create. This may appear like a minor inconvenience, but in reality, even the slightest friction can have a large impact. By reducing this process to a single tap, Snapchat enables users to capture fleeting moments faster and with less effort. And to capture a video, simply hold down on the screen to begin recording[1]. No need for additional taps to toggle between photo and video modes.

On Snapchat, nothing is permanent. Photos and videos vanish immediately after consumption. Some argue it's a gimmick, but in reality, this ephemerality lowers our inhibitions to share. When we are less self-conscious, we are less hesitant to act. We care less about creating the "perfect" photo or message, knowing it will disappear in an instant.

In comparison, the permanence of email or text messaging establishes an entirely different context. The artifacts of these conversations live on forever, and we acknowledge the possibility that they could be forwarded or leaked to unwelcome eyes. This establishes reservations, censoring what we share and encouraging more thoughtful and ultimately, less frequent communications.

Group messaging and social network "feeds" are channels for one-to-many communication. These messages are implicit broadcasts, not directed to specific individuals unless mentioned. In turn, consumers of the message have no obligation to respond and in some cases, may be hesitant to reply in a public forum.

After crafting a message, Snapchat users must select who to send it to. They are given the option to send to one or many individuals yet recipients are unable to discern whether a message was explicitly sent to them or several people. And this is the genius of Snapchat. It enables a single message to have a broad reach while maintaining the intimacy of one-to-one communications, leading to a higher volume of messages sent and increased response rates as users feel more socially obligated to return the favor.

We've all received an unwanted text message, email, or voicemail and ignored it. We pretend we didn't see it or delay our response. When senders ask, "Did you get my message?" we make up an excuse. But on Snapchat, there's no pretending. Each snap includes a read-receipt, informing senders their message was viewed.

This subtle indicator has significant impact on the dynamics of these interactions, creating a social obligation for recipients to reply in a timely manner. This leads to higher response rates and more expedient replies, increasing usage.

Response rates are critical to the success of Snapchat. Without it, users won't stick around for long. Our craving for feedback and reciprocation is one of the strongest drivers of social products. To illustrate the effect of response rates, I'll use a very simple example:

Let's pretend there are two messaging apps, App A and App B. App A's average response rate -- the percentage of messages sent that users reply to -- is 80 percent. App B's response rate is 20 percent. For every 1,000,000 new messages sent, another 800,000 are generated in App A and only 200,000 in App B. In turn, these additional messages have a compounding effect as the original sender replies (assuming response rates remain constant). After 9 interactions, App A generates an additional 3,463,129 messages from the initial one million sent, 13 times more than App B's 250,000 messages. 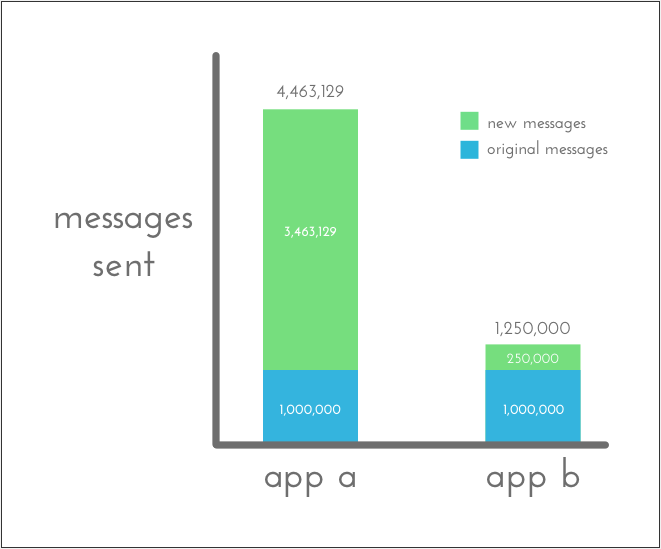 But response rates are just one piece of the equation. Cycle time, the amount of time elapsed between each message, also has a significant influence on engagement. If it takes an average of 4 hours for users to respond to each message, App A will send its 4,463,129th message after 36 hours. However, if the app's cycle time is reduced to 1 hour, the same number of messages will be sent within 9 hours, intensifying engagement.

The human brain feeds off of variability. When things become mundane and predictable, we become disinterested. Consider your own reading habits. After finishing a book, are you motivated to read it again? Once the mystery is gone, so is our interest. But humans are unpredictable, and it's this variability that makes social products engaging and long-lasting.

Snapchat communications are highly variable. Each message is composed of various forms of self-expression, captured and created at that moment in time. When notified of a new message, one might question, "I wonder what it is? A photo, a message, a doodle, a video? Where is my friend? What are they doing? Is this a message just for me?"

These questions fuel our curiosity as we hold our finger on the screen to view, knowing the snap will disappear forever in an instant. Ephemerality encourages us to treasure these moments, capturing our attention and transforming ugly photos into novel interactions. This variability keeps things interesting, increasing our motivation to remain engaged to uncover the mystery.

In essence, Snapchat succeeds because it encourages frequent use by making it easy and quick to create photos or videos, reducing inhibitions with temporary communications, creating a social obligation for users to reply to explicit, one-to-one communications, increasing response rates and timeliness of replies using read-receipts, and motivating consumption through novel, highly variable interactions.

That's powerful. And as people continue to use the service several times per day, behaviors emerge that perpetuate engagement and retention. Soon, they are hooked. And unlike the ephemeral communications it produces, engagement persists as users turn to Snapchat again and again.