The Statue of Liberty. David. The Great Sphinx. And....Steve Jobs?

If a couple Apple fanboys have their way, a giant Steve Jobs statue may be headed stateside. The duo have launched an Indiegogo crowdfunding campaign to raise money for a Jobsian sculpture to be built and erected somewhere in the Bay Area. They got a quote from four or five designers, and set the campaign minimum to $50,000 -- the price for a lifesize figure. The more money they raise the bigger the statue will be. "We're hoping for Statue of Liberty size," campaign creator Alex Kennedy says. "It's a crazy goal."

The campaign, which launched today, coincides with tomorrow's release of the biopic movie Jobs. Gotta imagine that will give the fundraising traction, particularly among the Jobsian fanatics. At the moment it's raised a mere $10 bucks, but it only went live an hour ago.

The campaign has some nice, dramatic little fanboy flourishes to it if you're looking for an afternoon giggle. My personal favorite line: "Whether the mark he made becomes indelible remains to those who are still around. We are the bearers of his legacy." I guess in a hundred years when iPads go out of vogue a statue would still be standing. All the tourists will snap photos of the famous black turtleneck using only their eyes, and then telepathically tweet their confusion about why the statue is holding a rectangular object. Was that really what they used to communicate and surf the Internet back then? #progress 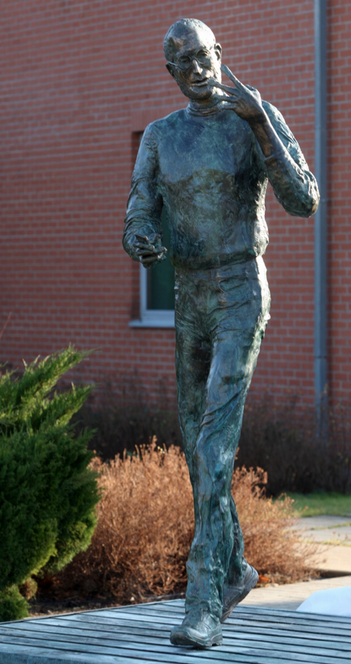 If the statue gets built, it won't be the first Jobs figure in the world. A 3D design software company in Budapest commissioned a statue -- complete with creepy, ET looking fingers -- back in 2011. See pic to the left. When that happened some people proclaimed that this would be the first of many Steve Jobs tribute statues, but till now that hasn't been the case. Budapest is still the only place rocking a Jobsian idol.

22-year-old Alex Kennedy and his campaign co-creator are both Scottish, but they moved to SF a few months ago to launch a startup that's in stealth mode. They've both read Jobs' biography, and Kennedy credits Jobs as his personal inspiration for dropping out of college to start a business. "We wanted to do something to make sure the memory of someone who had a defined influence not just on us but on the entire world would be remembered for generations moving forward," Kennedy says.