Watch out StubHub: disruptor TickPick is creeping ever closer to your throne

Like the teen who goes goth and starts smoking pot to spite her suburban parents, ticket resale site TickPick was formed entirely in reaction to StubHub. The TickPick founders Brett Goldberg and Chris O'Brien resold tickets in college to make a little extra cash, and they got frustrated by StubHub's fees for buyers and sellers and the limited search options.

"I used to have an excel sheet and I would pull everything into that ticket listing and say 'This ticket is better than that one, worse than that one,'" Goldberg says. "When I looked at StubHub I would try to understand what I would personally do to make it more of a science."

TickPick launched in 2011 in an effort to beat StubHub at the ticket titan's own game. TickPick is free for buyers, and charges a smaller commission on tix than StubHub does for sellers. It also gives buyers more options: They can bid how much they're willing to pay for a ticket, or choose from tickets available, with deals ranked best to worst to help users decide.

As of Thursday,  TickPick has upped the ante once again, adding a Fan Profiler feature to its list of other customizable searching options. People can weight how much they care about cheapness vs. best seats in the house, and TickPick will give them deals tailored to their needs, graded A-F.

Now that they've started their own site, Goldberg spends a good chunk of his days carefully curating the TickPick blog, which he uses as a tool to "educate" people about the problems of StubHub. Case in point, there's an entire entry devoted to telling people how to find information on StubHub about the seller's fee. StubHub buries those details deep on the site, and when I was Google searching how to find that myself, the TickPick blog entry "The truth about buyer and seller fees" was one of the first results. Savvy SEO content marketing.

The TickPick new Fan Profiler gives users one more way to slice and dice their search results so that no Excel sheets are necessary for comparing and contrasting. I didn't find the user interface totally intuitive, although the site certainly has a clean layout (and much cleaner than StubHub). I can't help but wonder whether people would get overwhelmed with too many search choices. 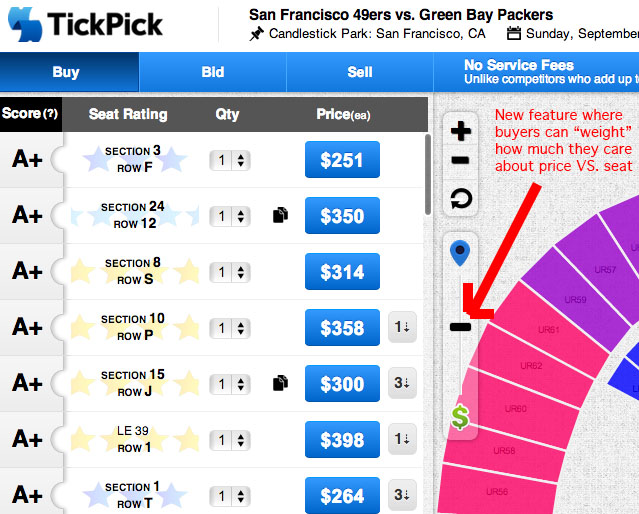 Smita Saran, StubHub Senior Manager of Communications, agrees. "If you're not being thoughtful about personalization, you're just confusing the user," Saran says. "At StubHub personalization is about thinking of the entire user experience, the pain points in that, and finding ways to make that singular interaction better. It's not necessarily about filtering options and searching in a million different ways." StubHub is the stodgy old ticket titan, and Saran says that as a result it often doesn't get recognition for the innovative features it has launched. For example, their latest app lets fans see the view from the actual seat they are considering buying for most big venues.

StubHub may be innovating without recognition, but that's not a problem TickPick is having. In July, TickPick won the Innovation Award at the annual industry conference Ticket Summit, and conference Executive Director Molly Merez had nothing but glowing things to say about what the startup is doing.

Overall, their company philosophy is customer-centric, and their user interface couldn't be easier. The decision to have TickPick be the Industry Innovation Award winner was indisputably unanimous.

Of course, TickPick has a long way to go before it can dethrone StubHub. StubHub invented the online ticket resale space and has a 13 year headstart on TickPick. Plus, as Sarah Lacy wrote it has a reason for still being relevant -- amazing customer service. StubHub's Saran said that at 80 percent of big events a StubHub representative is on site, to help with any ticket problems that could occur.

TickPick knows it has a long road ahead of it, and it's looking into strategic partnerships to widen its scope. It has made two million in ticket sales this year, but with a staff of four TickPick is still a baby in the space, albeit a charming and well-liked baby with a lot of potential.