RPX and the complicated business of stockpiling patents for good, not evil 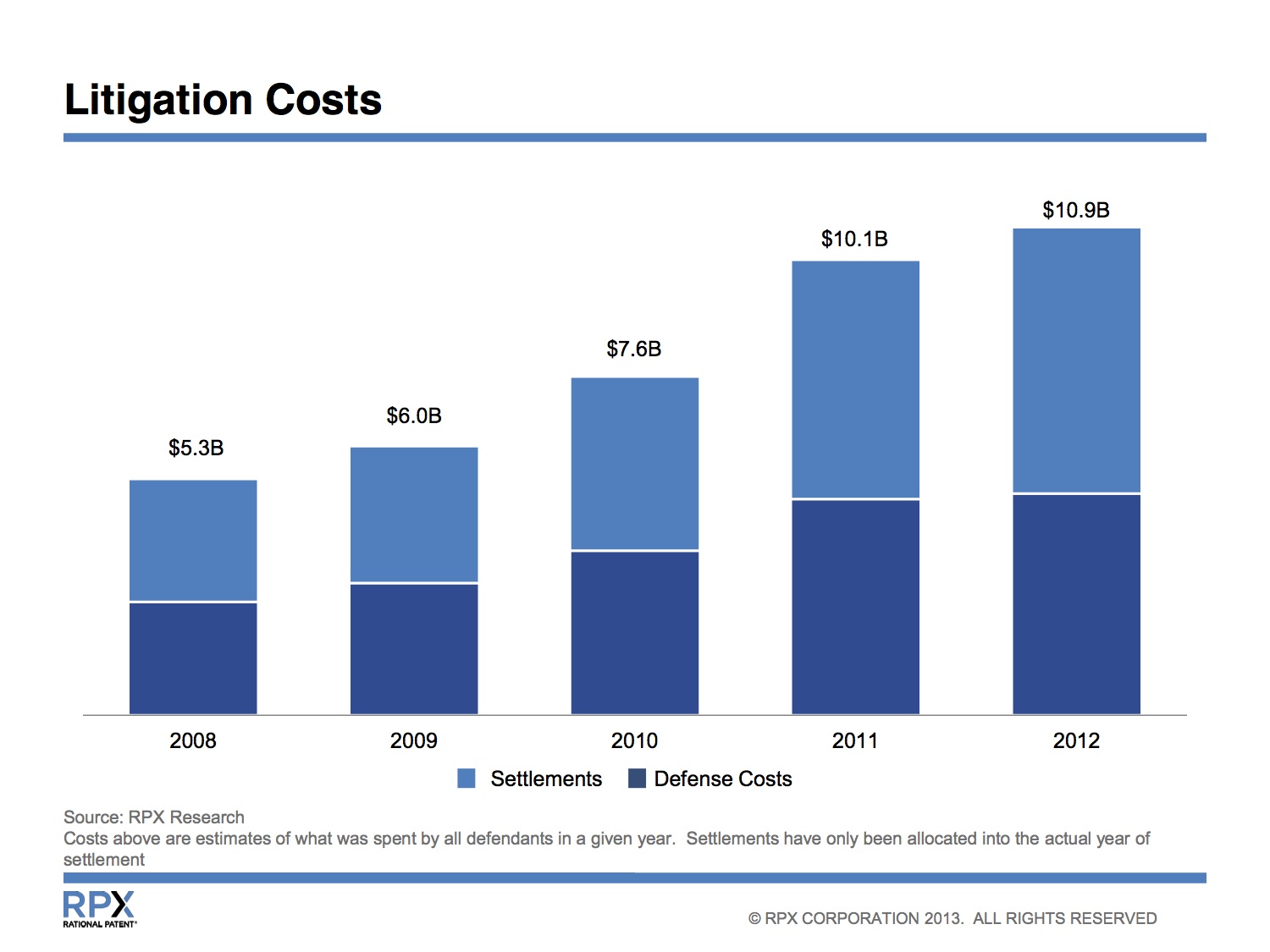 That's what John A. Amster and Geoffrey T. Barker, two executives at the country's largest and most notorious patent trolling company, Intellectual Ventures, must have been thinking in 2008. That year they left their roles as patent acquirers at Intellectual Ventures to start RPX Corporation, a patent aggregation company with the tagline "Rational Patents." (The official company statement is that Barker and Amster "saw an opportunity to use market-based mechanisms to help operating companies reduce the costs and risks of NPEs.")

The idea behind RPX was to create a safe harbor for companies ravaged by expensive, time-consuming, irrational patent litigation. If patents are a significant operational risk, then "RPX has the solution," the company's website touts. Let us help you fight these mean patent trolls.

With the help of investment from Kleiner Perkins, Charles River Ventures, and Index Ventures, RPX began buying up millions of dollars worth of patent portfolios and licensing them to clients as weapons in patent troll attacks. Any company can pay an annual rate card based on its size to license RPX's entire portfolio of 3800 patents. Membership starts at $75,000 a year.

To distance itself from its founders' patent trolling past, RPX is makes one thing clear: It will never use its patents for evil. Meaning, RPX won't sue anyone with its arsenal. They're only for defense. To hear the company tell it, RPX is acquiring dangerous patents like they're weapons of mass destruction and defusing them.

Nonetheless, the idea worked. Quickly large tech players like IBM and Cisco, who were spending millions individually on patent defense, signed onto RPX's platform. RPX has 160 clients, including AOL, Google, HTC, and TiVo. The company uses fees from new clients to gobble up even more patents, making its network increasingly valuable to clients with each new acquisition.

The company went public in 2011 at a market valuation of $1.1 billion. Last year RPX earned $197 million, turning a very healthy profit of $39 million. And business has even begun to expand beyond tech companies. As software becomes a larger part of every sector of the economy, companies in retail, financial services and automotive have increasingly been hit with patent lawsuits. Earlier this year Activision TV sued the retail chain Build-a-Bear Workshop for having a remote controlled electronic display system in its stores. The patent troll Lodsys has sued plenty of large and small tech companies over patents, but in 2011, Lodsys extended its lawsuits to include Best Western, Adidas, Best Buy, Vitamin Shoppe, Sam's Club, The Teaching Company, Vegas.com, and Stanley Black & Decker.

The most egregious (and famous) example of patent troll creep is Innovatio IP Ventures, a patent troll based in Delaware, which has been suing hotel chains, coffee shops and restaurant chains for using Wifi. The company's lawyer benevolently tells Patent Examiner that it has made a "strategic and business judgment at this stage" not to sue people for using Wifi in their homes.

Even though RPX is a financial and business success, it sits in a morally perilous position. RPX paints itself as a savior to victimized companies only want to innovate, a solution to the patent market's absurd irrationality.

But it also benefits greatly from said absurd irrationality. To crib a line from Matt Taibbi, RPX is in the pain business, and business is good.

As long as patent trolls continue their aggressive attacks, RPX's earnings will grow. That creates a strange symbiotic relationship between RPX and patent trolls.

"These guys are getting rich trying to slay the monster they helped create," notes Forbes.

"Is RPX's 'defensive patent aggregation' simply patent extortion by another name?" asks a TechCrunch article from 2008. "Ultimately its business still boils down to a protection racket," wrote Erick Schonfeld. "An enlightened one, but still a protection racket."

Regardless of the characterization, companies can't afford to care about wrong and right -- they care about legal, illegal, and protecting their bottom line. That much is clear in the experience of Mallun Yen, who was working as VP of Worldwide Intellectual Property and Deputy General Counsel at Cisco in the mid-2000s.

Over the course of her tenure there, Cisco went from around five patent troll lawsuits at a time to over 50. Where her workload had once dealt primarily company-to-company lawsuits, NPE suits had now taken over, she says. To better combat the lawsuits, she tried stockpiling patents within Cisco, buying them up defensively before the NPEs had a chance to sue. That practice has become common at large tech companies now, evidenced by Microsoft buying 800 patents from AOL last year for $1.1 billion. Coincidentally, Microsoft recently won a patent lawsuit against Google, which had paid $12.5 billion to acquire Motorola for its portfolio of patents.

Stockpiling patents defensively at Cisco was effective, Yen says, but an inefficient use of corporate resources. "Most of those patents, we didn't want," she says. "We realized it wasn't sustainable."

She also noticed heads of IP at other large tech companies were facing the same problem. They were all individually fighting patent trolls, which seemed to be multiplying by the day. Often they were working against each other by making different arguments, or duplicating the same work in parallel with different law firms.

Then she met Amster and Barker. "Within a minute of RPX pitching me on it, I was like, 'What can I do to help?" she recalls. Soon after she joined the company as its 63rd employee, heading up corporate development, M&A, and structured acquisitions.

She's shepherded the company's vision from simple pooled patent defense to a variety of products and services, including data and insurance. As of June of this year, RPX had 19 policy holders on its insurance business. Seeking Alpha estimates the company will make up to $8 million on that business by the end of the year with an additional 1800 potential clients.

Yen is careful to avoid criticizing patent trolls, referring to them all the while as NPEs and not trolls. RPX's job isn't to decide who does or doesn't deserve payment for their patents. "There's no question in anyone's mind these days that patents are assets that have value," she says. "People recognize that. They're just really expensive to pay for because of the transaction costs."

RPX's job, then, is to make the whole process more efficient. The best-case scenario for RPX clients is to avoid litigation before it happens. The second-best case scenario is to dissolve the case as cheaply and quickly as possible, which RPX helps clients with through its extensive data, insurance, and other IP-related services.

Still, without irrational patent lawsuits, RPX has no business. The company benefits from a broken system.

RPX even puts patents back in the hands of patent trolls sometimes. The company has purchased $675 million worth of patents, but to keep up with the blistering pace of innovation, RPX also sells off patents to free up resources to buy more patents. The company has divested four portfolios thus far. It offers the for-sale patents to its clients first, then to operating companies. (To be sure, the majority sold thus far have gone to operating companies.) But if no one else wants to buy the patents, RPX will sell it to an NPE.

With patent reform becoming a priority in Congress, the company sits in an awkward position.

RPX is supportive of patent reform and changes to the patent system, Yen says. But the company has not lobbied Congress, because it isn't big enough to have the resources to do so, she says. RPX provides data to academics and the government for large studies, such as the US General Accountability Office's hotly anticipated two-year report on patent litigation, released on August 22. (Depending on who you ask, the report confirms that bad patents lead to trolls, and also that there is no patent troll crisis. NPEs only represent around one fifth of patent lawsuits, the study concluded.)

Yen notes that RPX's interests are aligned with patent reform because of the company's insurance business. Insurance businesses benefit from a market being rational and predictable, she argues. "Because now our necks are on the line as well," she says. "We are insuring these companies and believe there is a long term business there, so we need it to not be crazy and we need to be able to reduce the costs."

"Anything that creates more predictability and more transparency is going to be critical in creating a marketplace that's rational," she says of patent reform.

Her former employer, Cisco, was very active in patent reform during her tenure. It was there that she learned broad, sweeping patent reform was not as simple as it seemed. "A lot of my peers really, really believed we could change the laws all at once and fix everything that was broken about the patent system," she says. "It sounds naive, but we really thought we could."

RPX's official stance is that the proposed legislative changes are not trying to change substantive patent law, a spokesperson wrote. "So, while helpful, there is recognition that technical and process fixes won’t eliminate the NPE problem, and that legal changes are unlikely to result in a broad-based overhaul of the patent system."

Indeed, the current proposals for patent reform, which have tech companies feeling hopeful, don't go nearly as far as the Electronic Frontier Association and the App Developers Alliance would like. Commentators have already predicted the end result will likely be toothless.

The situation is quite different outside of the US. Last week, New Zealand passed a law ended patents for basic software. The UK and Europe already have similar laws in place.

But Yen says (speaking for herself, not as RPX's official position) that the US legal system isn't set up for sweeping reforms like that. "Very rarely is there something that eliminates an entire asset class," she says. There are too many competing interests for a flat-out ban on patents. Beyond that, singling out one specific area, like software, goes against the way the government has approached this problem in the past. Rather, the US system re-interprets and makes small technical improvements to existing laws.

As disappointing as it may be for innovators frustrated about patent trolling, the reality is the trolls aren't going anywhere, at least for awhile. You could argue that the way RPX capitalizes on a broken system is wrong. Or you could argue that RPX is fighting the good fight, because it's helping innovative companies in their battles against patent trolls.

Regardless of whether RPX is evil, it is, for the foreseeable future, a necessary evil. We'll know true patent reform has arrived when companies don't need pickaxes at all.

[Illustration by Hallie Bateman for Pandodaily]