The mobile generation wants messy sites to get their act together

It's not often that someone starts an interview with me by insulting PandoDaily, but that's exactly what Amin Eftegarie did when I asked him how he came up with his startup idea.

"I wouldn't call Wordo a startup. The word is over hyped, especially by guys like you," Amin Eftegarie says.

He built Wordo in four hours with a friend and a simple dream: to make an online dictionary free of clutter. People type in a word and get a definition. That's it. Just you and the word you're looking for. No advertisements littering the sidebars, no pictures or banner ads obscuring the information. No monetization or marketing strategy. No investment, and no plans to scale. 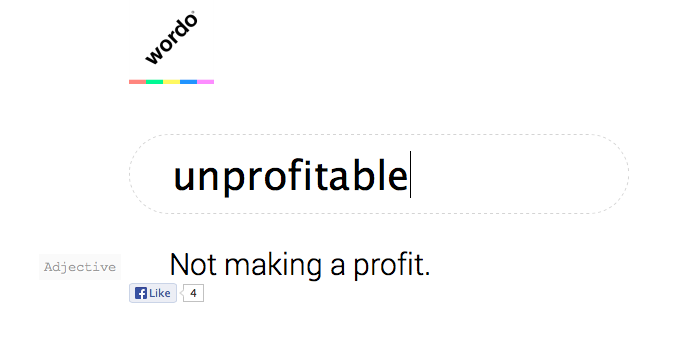 "What's the definition of a startup, we should look it up in Wordo," Eftegarie says excitedly. "The act or process of starting a process or machine. But Wordo is not even a company."

Despite being far outside the realm of the high-growth startup ecosystem, Eftegarie is onto something with his Wordo site. "Tabletification" is disrupting how we consume content in a variety of verticals.

Hamish McKenzie has covered this trend in the media space, with traditional companies like NPR adopting a mobile-first approach, rolling out clean websites that look more like mobile apps then traditional sites. Nathaniel Mott wrote about it this morning, with a presentation app that follows the same idea.

And now, Eftegarie has unknowingly cottoned onto the trend, simply by following his natural inclination. He was writing a blog post and used a difficult word. He realized readers would go to Google to look it up, so he decided to link the word to a definition. "But there was no website worthy of my link," Eftegarie says. "Because I'm not just giving a link. I'm giving them my vote, that's how I see it."

Eftegarie is only 24, the generation raised with social networking hardwired into their brains. He understands that consumers hold power through content sharing, and that brands and companies need to make users happy if they want to retain their social sharing "votes."

If there had been a dictionary online that looked more like a mobile app, Eftegarie would have linked to it. But there wasn't, so he made his own.

Eftegarie runs his own clothing brand -- Trashness -- from the Netherlands, and has no intention of turning Wordo into anything other than what he needed. A dictionary that's easy to use and looks good. Will Wordo take off without marketing or a magical SEO bump? Probably not. I can't say I've ever heard anyone complain about the problems of online dictionaries.

But the existence of Wordo itself raises a question: aside from dictionaries, what other random corners of the Web will be challenged by newer, cleaner up-and-comers?

I wondered this a few weeks ago when I did a story on TickPick, competitor to StubHub. StubHub has a lot going for it -- it's the oldest company in the ticket resale business, under the eBay umbrella, and known for its killer customer service. But its website is ugly, old and crowded.

After talking to StubHub marketing rep Smita Saran, I learned about all the innovative offerings StubHub has rolled out, like seat visualization which lets you see the view from various seats before you pick your ticket.

But you would never have guessed that StubHub is innovating from looking at its homepage. It's easy to write it off as an ancient relic before ever giving it a shot.

Sites that aren't "tabletified" -- by the way that's a terrible word, can't we just say appified? -- are starting to look outdated. It's akin to how Google knocked off Yahoo. Aside from its fancy search algorithm, I remember what someone said when persuading me to switch to Google: the homepage looks so clean. Within a few years of Google dominance, the ad-crammed, banner-strewn, marquee-laden Yahoo and AOL home pages reminded me of my grandmother. I think that's because she was the only one I knew still using them.

On the backend, it's not easy to switch a giant company website with its myriad of content over to a new system. Plus the cleaner the layout, the less ad money there is to make. But in terms of branding, I think entrenched companies are going to slowly lose their footing to sites that look like they were created in the mobile era.

Apparently the members of the mobile generation know what they want in terms of web layout, and they'll code their own site if they can't find it.