What happens when your coffee maker is designed by mechanical engineers

Coffee snobbery is alive and well. Case in point: a few days ago an engineer and a designer out of an incubator in the redwoods of Santa Cruz launched a Kickstarter for a new slow drip cold coffee brewer. Talk about niche market. But apparently, not as niche as one would think, because they've already raised $14,000 to fund it, with no press or marketing efforts. 245 people browsing Kickstarter came across their project and really really wanted a cheaper slow drip cold coffee bougie. Excuse me, I meant brewer.

Gabe Herz and Andy Clark, the founders of "Bruer," both work for startups on the Santa Cruz Ranch, a rustic incubator funded by the man behind the Joby tripod. Clark is an industrial designer, and he builds remote controllable gliders for aerospace hobbyists. Herz is a mechanical engineer working on Galileo, a swiveling iPhone holder that you can control remotely. The two fellas are stuck on the ranch, miles away from any women, bars, or restaurants, so they got bored one day and decided to reinvent cold coffee making.

Wouldn't it be nice to be an engineer and just invent things you wish existed on your day off?

Herz was a big coffee buff, so he knew slow drip cold coffee -- known as "Kyoto" or "Japanese" style brewing -- was up and coming. You may have seen the contraptions lining the walls of the popular Blue Bottle Coffee in San Francisco or New York. Large, intricate machinery that looks more like it belongs in a science lab than a cafe. Most of the devices out there for brewing slow cold drip were big, old, and expensive. The average coffee enthusiast couldn't afford them and wouldn't have the kitchen counter space to store it.

Herz and Clark started where any engineer would: by ordering a few of the coffee makers and tinkering with them. They broke them into pieces to figure out how they worked, and what they could change. Over the course of the year, they drew up different prototypes, pouring $3,000 of their own money into the project, and most of their free nights. They invented a new type of valve to control the flow of water, got rid of unnecessary fans and ornamentation, and widened the diameter of the coffee bed. 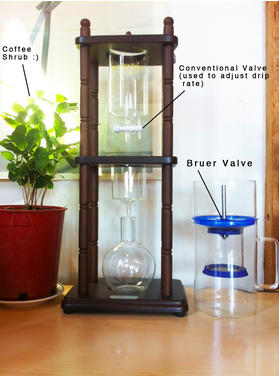 The end result is a brewer $150 cheaper than the conventional cold drip brewers on the market, and apparently excited enough coffee snobs to rapidly crowdfund the $14,ooo it would take to mass produce the device in China. It's more expensive than the other cheap 'n easy slow drip cold brewer on the market -- Toddy. Clark says that's because Toddy brews in a different way -- by soaking the beans in water instead of slowly dripping water through the beans -- and the flavor isn't as good.

Herz and Clark are part of a new wave of Kickstarter users who had to invest the time developing their product before they could raise money for it. A year ago, Kickstarter changed its submission guidelines for physical campaigns, saying that inventors could not just offer renderings of what the project might look like when finished. Instead, anyone crowdfunding through Kickstarter would need to show how their project looked at that moment. The idea was to keep people from treating Kickstarter like a store, and to make sure inventors were held accountable for what they promised.

Herz says he didn't mind. "We wanted to make sure everything we were doing was tried and true, that we weren't promising anything we couldn't deliver," Herz says. "Having a working prototype was really important. Even if they had allowed us to submit renderings, we still would have gone with a working prototype."

As for the future? Well, Herz and Clark are banking on the fact that the Kyoto coffee buzz isn't going away anytime soon, and they'll get enough orders to quit their real jobs and run Bruer full-time.