Is your school underrated for tech entrepreneurship?

"If it’s a sure thing, then it’s already on its way out.”  - Investor’s saying

As the Managing Director at a tech accelerator, I face a dilemma. I need to fund the most talented people, because they’ll be most likely to build great companies. But I also need to find the hidden gems.  I’m the sort of person who’s always looking for the best deals.  Let me tell you, great deals almost always come from unexpected sources.

Here’s the problem: If I look for talent in the same places everyone else does -- at Stanford, Harvard, and MIT -- I’ll have to fight crowds of investors and even other accelerators who are trying to do the same thing I am. I don’t like lines, and I hate waiting, so I don’t go with the crowd. I try to create value where others don’t recognize it.

So how do I decide where to scout for talent? I look for founders from underrated schools. Until now, I’ve been looking in places like Harvey Mudd, Columbia, Cornell, UCLA, USC, UC Berkeley, and Michigan, to name a few. I believe all of these schools don’t get the credit they should for engineering talent and innovation.

But there’s a problem with that approach. To decide which schools are under-rated, I have nothing more to go on than my gut feeling. I hate that. I knew I needed something more precise or else I’d feel guilty. After all, I’m an engineer.

There must be a better way than just guessing or reading the “Top Engineering Colleges” list to decide where I recruit from.

How can you tell if a school is underrated?

This idea came to me when I visited my alma mater (Go Wolverines!) and spoke to a group of 400 engineering students who want to become tech entrepreneurs.

I know that University Michigan has a sterling reputation for engineering and is consistently ranked highly. But still, the school isn’t well known for entrepreneurship. This isn’t fair. As it turns out, many Michigan alums found successful companies. But that doesn’t change the perception of Ann Arbor as an entrepreneurial backwater. Most think Michigan doesn’t produce great startups, when in fact it does. To me, that means Michigan is an underrated entrepreneurial school.

To add insult to injury, the "value add" investors that are so important for young companies don’t even know Michigan should be on their radar. And those investors are missing out on some great deals, if they would only look for them. Further, if people saw Michigan as a school that produced great startups, maybe it would produce more of them.

Schools like Michigan have a problem. It’s not fair to them, their startup founders, or  investors who are seeking returns. How can we cut to the truth of the matter? Wouldn’t it be helpful to quantify how successfully schools produce fundable entrepreneurs? Using data, my hope was that we’d figure out which schools are underrated.

It led to the creation of the 2013 StartEngine College Index, explained below and listed at the bottom of this page. I hope it will help investors decide where to search for teams, and help colleges get the recognition they deserve.

The first step was to grab the CrunchBase API data, which lists thousands of data points for funding received by founders of companies. We cleaned it up and distilled a list of all the colleges and universities in the US* with at least 15 alumni, who have founded a startup that has gone on to receive investment. (We combined undergrad and grad programs under the same school umbrella.)

We included the "at least 15 alumni" stipulation, because we wanted to make sure schools didn’t appear as a fluke. We included the "investment raised" stipulation to give ourselves a scoreboard. Fundraising also conveniently gives us a referee for what ‘counts’ as a startup or not. It's relatively easy to launch a startup, but it’s not easy to convince someone to invest in you.

Next we studied the startups. For each, we summed up total outside funding to date they’d received and then divided it by number of company founders, thus obtaining capital per founder (CPF). We determined the median CPF for each school. (We selected the median rather than the average because we didn't want our results to get distorted by outliers. Imagine if we took the averages total from schools like Harvard, which is responsible for Facebook? The numbers would be misleading -- way too high.  We wanted a more reliable predictor that wasn’t swayed by extremes.) The reason we did this is because looking at the mean would favor outliers. Since most entrepreneurs’ companies will not be outliers, we want to avoid painting that picture.

Finally, we ranked each school from highest to lowest, and listed how many founders came from each school for your convenience. Number of founders per school has no bearing on our rank (other than disqualifying a school that has less than 15), but is still included for context.

What did we discover?

Many public schools. There are 10 public schools on the Index, more public schools than I expected graced the list. It shatters the myth that only private schools have the right environments to produce innovation.

One reason to make the distinction between public and private is because of the lower cost of public schools.   This will help would-be founders avoid going into debt, which could force them to get jobs instead of founding companies.

Maryland ranked first in public schools. Now let's talk about the biggest surprise among the public schools on our Index: University of Maryland.  Maryland ranks second, with a median capital per founder of $10.3 million.

Who saw that coming?  The Terrapins have zero reputation for being an entrepreneurial bunch, but here they are crushing private schools (including the entire Ivy League) on the StartEngine index. Maryland ranks second, with a median IPF of $10.3 million.

One notable University of Maryland founder. People forget that Google was co-founded by a Maryland alum. Sergey Brin attended the University of Maryland from 1990 to 1993, earning a BS in Computer Science and Mathematics. He’s associated with Stanford, because he studied Computer Science there as a grad student, where he met Larry Page, also a Stanford Grad student but who originally studied at Michigan. The two became close friends and hatched a concept for an Internet search engine. They began working on it while still at Stanford but eventually left school to devote full attention to the project. Google was incorporated on September 4, 1998.

Google's first investors were Andy Bechtolsheim, cofounder of Sun Microsystems, and David Chariton, Stanford professor and Bechtolsheim's business partner. Each made angel investments of $100,000 in September of 1998. In 1999, Google obtained $25 million from venture capital firms Kleiner Perkins Caufield & Byers and Sequoia Capital. This was the final investment Google would obtain before going public in 2004.

Thus, prior to going public, Google obtained investments totaling $25.2 million. Since Google has two founders, its capital per founder is $25.2/2 million = $12.6 million, which is attributed to Mr. Brin and Mr. Page.

Illinois is ranked highly. Illinois is another school that’s ranked highly, but no one thinks about when they’re looking to invest in tech. What’s an example of a great company who came from there?

Yelp is one. In 2004 Jeremy Stoppelman got the flu and had a hard time finding recommendations for a local doctor. That experience gave him the idea of creating an online community where users could share recommendations for local services. He and Russell Simmons, both Illinois alumni and both of whom had been early employees at PayPal, developed the idea and pitched it to Max Levchin, PayPal's cofounder and Chief Technology Officer. Levchin liked the idea and provided $1 million in seed funding.

Yelp's initial website floundered. However, remaining in discovery mode, Stoppelman and Simmons noticed that "Real Reviews" were popular. So in 2005 they re-launched with "Real Reviews" as the main feature. This pivot paid off. By 2008 the website had more than 15 million visitors per month.

Another reason for Yelp's success was that it made a concerted effort to cultivate its reviewer base. It created a Yelp social network to incentivize continued loyalty. And it invited the most dedicated reviewers, whom it named The Yelp Elite, to parties and other special events. This is a brilliant way to seed the community and make a great platform.

What? I know Chicago has a lot going for it, but to me it seems to have has more of a conservative, corporate feel than the Bay Area, Los Angeles, or even New York. I wasn’t expecting a school like Northwestern to top the list.

Still, the school deserves praise. US News and World Report puts Northwestern fourth on its ranking of MBA programs. And according to our data, its median CPF is $10.4 million.

Of all the startups we studied, the company with the single highest CPF came from Northwestern. And the number is staggering. Groupon’s founder and CEO Andrew Mason has single-handedly raised about $1.1 billion -- he has no co-founders.

Evan Sharp graduated from the University of Chicago in 2005 with a BA in History. In March of 2012 he cofounded Pinterest along with Ben Silbermann and Paul Sciarra (both Stanford alumni). As a child, Sharp was an avid collector. "I collected pencils, stickers, everything." Pinterest was inspired by Sharp's childhood love of collecting. It allows users to collect and share images of things that inspire them. Today Pinterest has 70 million users and is one of the hottest young social platforms. Pinterest famously focused on early adoption from a user-base that isn’t coastal and blue-state, like most tech companies target as a knee-jerk.

To date, Pinterest has obtained a massive $337.5 million over four rounds of funding. (The latest round was a $200 million investment led by Valiant Capital Management.) Since Pinterest has two founders, its investment per founder is $337.5/2 million = $168.8 million.

The Ivy League... Princeton ranked best? I wasn’t expecting Princeton University to rank best among America’s oldest colleges, with a median IPF of $10.1 million. Over on the West Coast, Princeton isn't typically thought of as an entrepreneurial hotbed, but it beats its venerable Ivy League peers: Harvard, Yale, and Cornell. In fact, it beats most schools on the index -- it’s ranked third overall.

How can this be? I’m not familiar with any companies that came out of Princeton so I started digging.

I found companies we’ve all heard of, like Mint.com, Demand Media, and Lumos Labs (responsible for Lumosity), and several others we haven’t, like SiBEAM, AppNexus, DriverSide, and many others.

Clearly there are many underrated schools that you should be looking frequenting and making angel investments in. The truth is that Harvard, Stanford, MIT, though they are well known for producing lots of startups, aren’t the only game in town. According to our list, there are plenty of schools who aren’t getting the recognition they deserve. 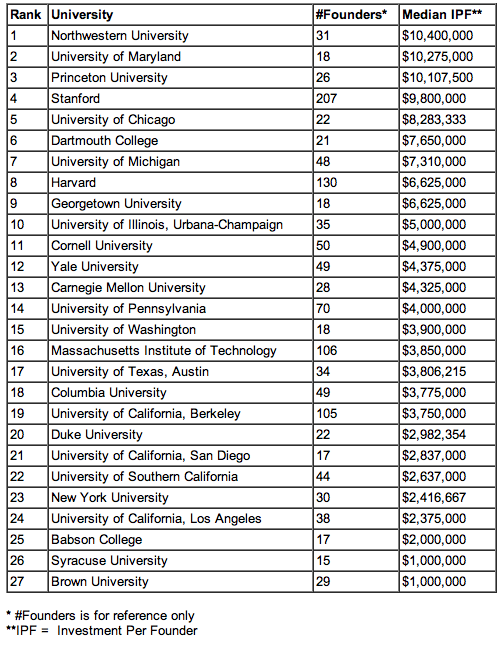