I was really excited when Tara Lemmey demoed her product Spin for me. Like, really excited. Think, 'kid in a candy store, bro at a beer pong championship, Travis Kalanick when he's making other founders cry' excited. As a tech reporter, I've certainly seen my share of fun products. But Spin, so far, is my favorite.

It's a video conferencing application for mobile, similar to Skype but lightyears better. There's a whole bunch of reasons why.

Through touch you can move around the faces of the people you're talking to, making them larger or smaller, assembling them as you wish. You can adjust the volume of individual participants, muting annoying ones with a single tap.

There's an array of effects much like Google Hangouts. You can throw tomatoes at fellow video chatters and send paper airplanes that whiz from your screen into theirs. You can draw in the spaces between your faces. You can watch videos or look at pictures together.

You can invite up to 10 people, so you can throw a party on the platform. You can flip the camera around to show people what you're looking at in the outside world.

You can send a one click email invite for people to enter the call. Even if they're not a Spin user, no sign up is necessary.

And that's just some of the functionality.

Spin taps into your inner child and turns video conferencing into playtime. It's like Snapchat for video, not about factual communication as much as emotional connection. And Justin Timberlake look out -- it's bringing silly back.

I'm not the only one who feels that way. Last week, I convinced Texas billionaire and Rackspace co-founder Graham Weston and his good friend and fellow entrepreneur Nick Longo to download Spin. We were doing a video interview to discuss the San Antonio co-working space they've created together -- Geekdom.

It's a passion project for both of them and before I knew it Graham and Nick were talking about how much they admire each other and enjoy working together. Amid the outpouring of bro-love, they started sending floaty little hearts through the app to illustrate their point. It was adorbz.

I wish I had the wherewithal to screenshot that moment, but I didn't. I did however, screenshot me and Nick after Graham left the conversation. I found out Nick was a father and I couldn't help but take the Spin platform for a run.

You see, one of the most useful features of Spin is that people on the video call can bring in Youtube videos, Instagram pictures, mobile photos, and Facebook images directly into the app. That way, everyone can look at them simultaneously. No more trying to hit play at the exact same millisecond as your grandmother when showing her the sweet dance moves of another grandma.

With Spin, y'all can explore the vast corners of the Internet together.

So as soon as I learned Nick was a father, I showed him the viral BatDad video making its rounds on the web. Here's me and Nick, watching BatDad do his thing, both of us having more fun in a work related video interview than anyone ever. 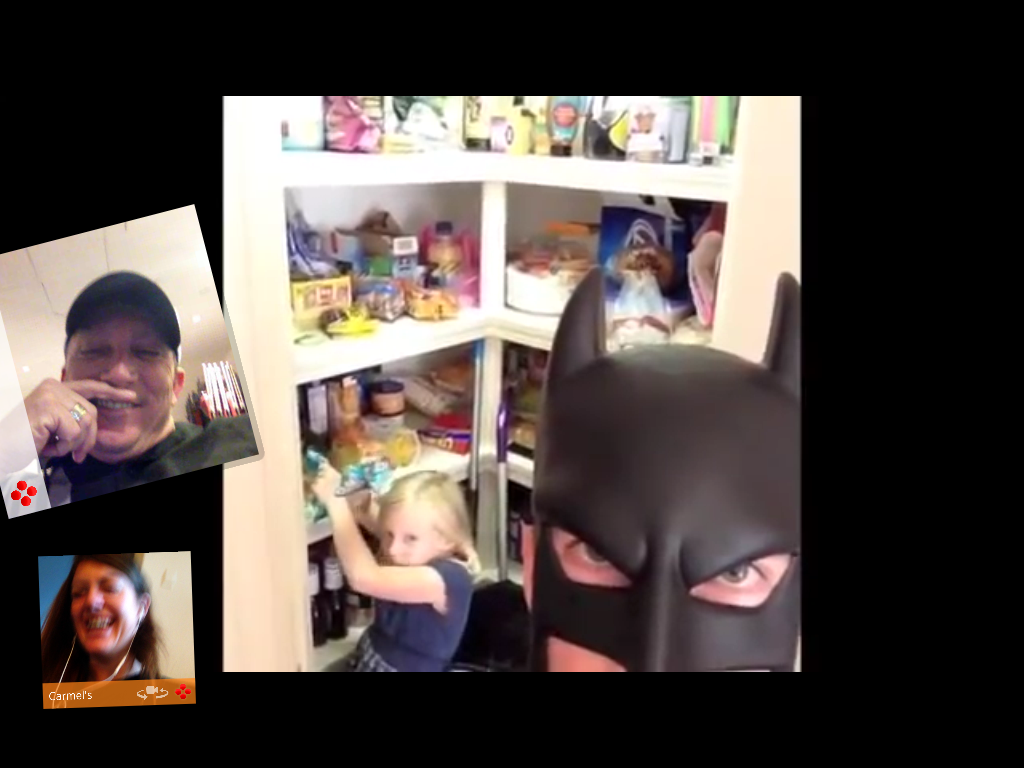 Tara Lemmey, creator of Spin, would be proud. In that moment, Nick and I were living her whole dream for her app. She wants to make video connection between friends, family and colleagues fun, playful, and easy. It's like Video Conference 2.0.

"What are the simplest things people want to do together that they currently can't?" Lemmey says. "You want to see things together and share things together because all of our families are all over the country."

Sure enough, when I tested out Spin with my mom I found myself showing her pictures of my neighborhood from my phone -- shots I had taken but forgotten to send her. She then flipped through her own photos, so I could see the teachers at the new school she just joined. We were in each other's worlds in a more intimate way than we would have been through Skype alone.

Despite Spin's whimsical little features, we're not talking about a hastily thrown together app here. Lemmey has an impressive list of credentials to her name, having founded a few companies, served as President of the Electronic Frontier Foundation, and co-chaired a Task Force on national security for the U.S. Government.

She's a serious engineer, but her driving passion in life is, as she puts, it "the human connection." She doesn't see that big a jump between her national security work and her new video app Spin. "If I could make people know each other and feel each other around the globe, it would do more for peace," Lemmey says. "I really believe the world is better when people are more connected."

Badass that she is, Lemmey spent three and a half years coding, crafting, and honing Spin with her co-founders Stan Vonog and Nick Surin. Did you hear me? Three and a half years. That's practically as long as the Andreessen Horowitz firm has been around. That's as old as Path or Instagram. The creators filed a whopping 80 patents in the process of building it.

They invented a whole new operating system just to get Spin's range of functionality. I'm not surprised -- I get the sense that Lemmey doesn't do anything hastily. She set up an in-person meeting with me before they had even picked a date to launch the app.

Spin is about as far from a minimum viable product as possible. It's more like…a maximum viable product. Is that a thing? The functionalities of the video chat app are so extensive, we couldn't even get through all of them in the hour meeting we had.

The biggest obstacle new Spin users might face is that the environment is very different from other apps. It's not imitating Instagram or Google Hangouts -- it's got a whole new UI, and takes a little time to navigate.

The other catch (there's always a catch isn't there?): right now Spin only works on Apple mobile. You've got to have an iPad or an iPhone to play along. There's not even a desktop version. Wah wah wahhh. You can tell just by the way I'm writing the story that I'm in a Spin mood. I've used the app a handful of times, and it gets me giddy and silly every time. I can't wait till it makes its way to Android, everyone's got it, and it can be the default video chat style.

Lemmey used Walt Disney and Harry Potter as some of her inspiration for Spin. "Disney's entire goal was to make people more emotional and make them feel," Lemmey says. "He delighted people. His goal was to have an adventure, help people see the possibilities, open the whole world to them."

The point is Spin is awesome. Go download it. Immediately. Make your grandmother download it. Make your best friends from college download it. Start showing each other photos and watching funny videos together. Organize a reunion party on Spin, grab some bottles of wine, and wait to see how long it'll take before someone starts throwing tomatoes. It will be time well spent.