The instant gratification of the Web now comes in IPO form. With Facebook's IPO, we speculated and debated and analyzed for months waiting for an S-1 to be filed. Intrepid bloggers hit refresh on the SEC's Web site, racing to copy and paste Zuck's investor letter into Wordpress first. Once we finally got it, and everyone had to wait another four months for the IPO. We had time to write a whole e-book about it.

Now, we get a Tweet that an IPO is brewing. Three weeks later, an S-1 appears, and in a matter of weeks, Twitter will be ringing the opening bell. It's all happening so fast.

The speed of Twitter's IPO process is just one part of the company's plan to make its road to IPO less of a trainwreck than Facebook's was. Twitter's bankers, lawyers and executives have surely been asking themselves, "What were the 'egregious fuck-ups' (in the wise words of Reid Hoffman) that made Facebook's IPO such a disaster? And how can we do the exact opposite of that?"

Everything about Twitter's IPO will say "anti-Facebook." There's proof of it all over the company's S-1.

Yes, they are different companies; Facebook is much bigger than Twitter in terms of users, engagement, and revenue. Facebook was profitable when it went public and Twitter is not even close. But ultimately the companies are competitors. They compete for advertising dollars and, now, for Wall Street's investment dollars. I wrote at the time of Facebook's IPO:

Facebook's chief competitor, as it relates to advertising, operates directly across the street (on Madison Avenue in New York). Even though the Facebook IPO is expected to buoy the entire social media sector, and even though one mega-success should, in theory, open the door for more, Facebook does not view Twitter's social network as complimentary to its own.

You can be certain any conference keynoted by Facebook's David Fischer or Carolyn Everson includes an appearance from Twitter's Chief Revenue Officer Adam Bain. Sit through enough of their presentations and you'll see a pattern of subtle disses to each others' ad products. Everson displays her silly AIM screen name from the 90's to demonstrate the importance of Facebook's real names--representing real people--over Twitter's handles. Bain points out that, unlike a certain other social network, brands on Twitter won't encounter any "filtering algorithms" between themselves and their followers.

That differentiation is far less subtle in Twitter's S-1. These images make that much clear: 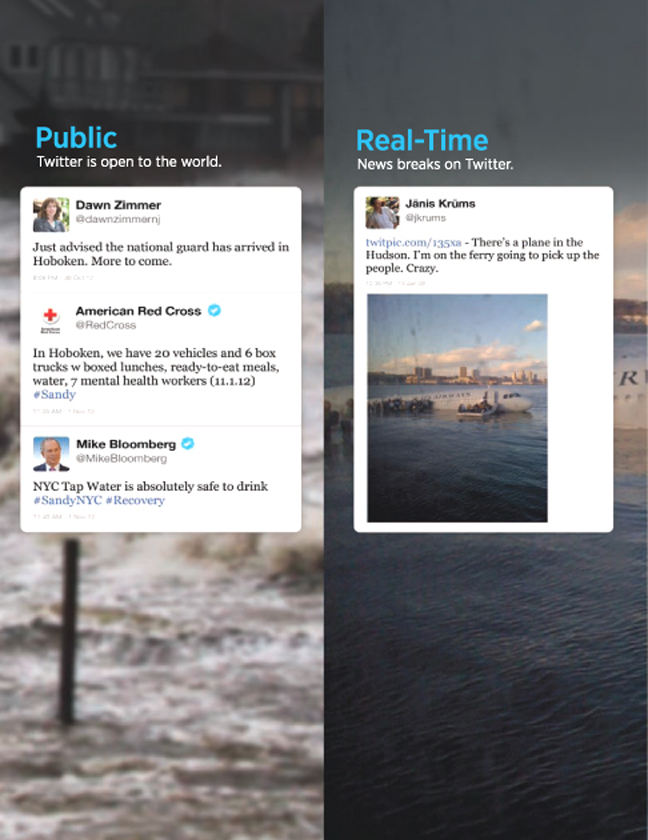 Twitter is real-time, and news breaks here. Unlike that other site where people just share their baby photos.

Facebook's IPO had a number of crucial errors, like the technical glitches on Nasdaq that had traders unsure of whether their bids had gone through. (Since then, just about every tech IPO has listed on NYSE. I'd be very surprised if Twitter chose Nasdaq.)

Likewise, Facebook's lead bankers, Morgan Stanley, got a little too greedy at the last minute, pushing for a higher listing price and valuation. It took the company more than a year to get its share price back to its debut market cap. Twitter chose Goldman Sachs to lead its offering, not Morgan Stanley.

One of Facebook's biggest errors can't be pushed off on its banker or its stock exchange, though. The company fumbled on mobile. Facebook had warned the public that revenue from mobile would be weaker than expected. But then it privately emphasized its downward revisions to institutional investors behind closed doors. Those conversations leaked to the press. A shitstorm erupted, and Facebook, which already came across as struggling with mobile, was blasted for it. The company has spent the first year of its life as a public company scrambling to prove it can innovate and make money on mobile. It has succeeded at that -- in July, Facebook's mobile ad revenue increased 75 percent quarter-over-quarter to become 41 percent of its total revenue.

Twitter is not messing around with leaks. So far there haven't been any, possibly proving that CEO Dick Costolo's move to remove every single person from Twitter's board at once actually worked.

But more importantly, Twitter was sure to eliminate any questions about mobile up front. Last quarter, mobile represented 65 percent of Twitter's revenue. Three quarters of Twitter's monthly active users are on mobile. Once Twitter integrates MoPub, the mobile ad company it purchased last month, mobile revenue will likely represent an even bigger piece of the pie.

Speaking of MoPub, compare that deal to Facebook's pre-IPO mobile acquisition. A month before its big public market debut, Facebook casually dropped $1 billion on Instagram, a hot mobile app with zero revenues. Zuckerberg was surprised that investors didn't like the brazen move. Twitter, on the other hand, spent $300 million on Mopub, a boring, nuts-and-bolts mobile advertising network that adds an instant $100 million in revenue to its bottom line.

Another big issue in Facebook's IPO was an 11th-hour stunt pulled by one of its advertisers. The CMO of General Motors publicly declared the company had pulled the $10 million a year it spends on Facebook's banner ads because they didn't work, supposedly. A year later GM reversed that decision, but the damage was already done. Twitter's business model leaves no room for cries of ineffectiveness.

Twitter's ad products are pay-for-performance, meaning ineffective ads don't cost money. "The pay-for-performance structure aligns our interests in delivering relevant and engaging ads to our users with those of our advertisers, " the S-1 declares. The company cites a Nielsen study which found that users who engage with Promoted Tweets have 30 percent higher brand favorability and 53 percent higher purchase intent. The company earned $2.17 per timeline (or user, basically) on ads last quarter.

But the biggest difference between the two companies IPO's is one of attitude. Compare their investor letters. Under the leadership of illuminati-hoodie-wearing Mark Zuckerberg, Facebook had cultivated its image as an idealistic, do-it-our-way band of merry hackers. In the investor letter of Facebook's S-1, which Zuckerberg wrote on his phone, he explained "The Hacker Way" to an audience of suit-wearing Wall Street investors. Facebook hackers take risks, he wrote. They're bold, they're sometimes wrong, and they move fast and break things.

On the day of Facebook's IPO, he declared that the company's mission was not to become a public company. That's cute, said Wall Street. Bankers who worked on the deal felt Zuckerberg acted as if he was above the whole road show song-and-dance.

Dick Costolo has shown that he is not. He is meticulous and process-oriented. Sarah Lacy has written about his disdain for the "make better mistakes tomorrow" attitude-- to the point of removing corporate artwork that said just that at Twitter's headquarters. Costolo doesn't view going public as a necessary evil. He views it as a sign that Twitter is through its many rough patches. It's validation that he was the right CEO to turn the world-changing product into a world-class company. He gets what's involved, respects the game, and isn't going to take any chances with a flippant attitude.

Consider the timing: Facebook was the event the rest of the markets timed things around. Twitter is clearly going public now to benefit from the recent surge in positive investor sentiment around Facebook, and even Groupon shares. The message to Wall Street is this: Even if we can't predict everything about Twitter's IPO or business growth, these mega-audience, high-growth companies come back eventually.

Twitter's investor letter is just seven short sentences, not signed by a young visionary CEO but simply by "@twitter."

 We started with a simple idea: share what you’re doing, 140 characters at a time. People took that idea and strengthened it by using @names to have public conversations, #hashtags to organize movements, and Retweets to spread news around the world.

Twitter represents a service shaped by the people, for the people. The mission we serve as Twitter, Inc. is to give everyone the power to create and share ideas and information instantly without barriers. Our business and revenue will always follow that mission in ways that improve–and do not detract from–a free and global conversation. Thank you for supporting us through your Tweets, your business, and now, your potential ownership of this service we continue to build with you. There's another factor in comparing and contrasting Mark Zuckerberg and Dick Costolo: Age. Zuckerberg was fresh-faced enough that he didn't know what rules he was breaking. Great. But he also didn't know any professional life but leading Facebook.

Costolo has been around. He's had boring jobs at big companies. He's started companies before that didn't become behemoths. He knows just how special this moment is, and that only a handful of the thousands of people who start companies every year ever get it. He doesn't disdain it. He's ready for it.