The Prince of Lyft: How one micro entrepreneur is ridesharing his way to stardom

Late at night, a red Honda Civic drives through the darkness in San Francisco. At the front hangs a trademark pink mustache, a familiar sight these days as rideshare startup Lyft takes off. But this isn't any old pink mustache. It has a golden trim around it, with LED lights shining against the car silhouette.

Inside, 36-year-old father of four, Deco Carter, mans the wheel. His black dreads hang down from a cap, Lil Wayne raps from the speakers, and a glittering mustache necklace swings from the mirror.

Carter is no average Lyft driver. He is Hip-Hop Lyft, the man, the myth, the legend. You haven't heard of Hip-Hop Lyft you say? Well if Carter has his way, the world will eventually know his name. He's riding his Lyft business to stardom. That's the plan anyways.

Carter runs a themed ride, where he plays old school hip hop for his passengers -- MC Hammer, Naughty by Nature, Ice Cube -- and offers up candy and water bottles.

For those riding along who seem open to a little fun, Carter has a trunk full of prizes they can win by playing Hip-Hop Lyft trivia. On the way to their destination, Carter quizzes them. "What city did Tupac Shakur die in?" "Lil Wayne's record label?" "Snoop Dogg's real name?"

He's got a robust knowledge of hip hop facts and figures, having rapped and emceed in the 90s. The passengers who get the last question right can choose from sunglasses, bandannas, necklaces, pimp canes, Red Vines, or whatever else Carter has stocked up on for the night's ride. Along with the LED-tricked out mustache adorning the car, Hip-Hop Lyft has a Twitter handle, an Instagram, swag, and business cards.

This, ladies and gentlemen, is micro-entrepreneurship in the social age.

Carter is building his personal brand through the Lyft business, becoming a company within a company so to speak. "I'm just thankful for everything happening right now," Carter says. "My background -- personally, I come from the ghetto. This is a dream come true already." He's starting to get local attention, building up a fan base of riders who've taken Hip-Hop Lyft and love it.

Carter isn't the only one turning his Lyft ride into a mini business. He's one of several themed Lyfts ranging from ChalkCar Lyft -- an artist who has converted his car into a giant chalk board for decorating -- to BatLyft -- who wears a Batman mask and offers costumes to passengers. The first themed lyft was DiscoLyft, run by Matthew David. David has since been plucked from the driver seat and hired into the Lyft company as a community manager. When asked whether Hip-Hop Lyft would make a similar jump to corporate, Carter says, "Oh, no no. My fans would go nuts."

For anyone rolling their eyes, Carter isn't deluding himself. I rode along for a night, and can attest to the fact that the man's got fans. In fact, the very first person Carter picked up happened to be a second time passenger and Hip-Hop Trivia winner. As we pulled up, Carter recognized her. "That's my girl right there," he says. "She's got the sunglasses to prove it."

She clambers in the car and recognizes Carter immediately. She's down to play another round of Hip-Hop Trivia, so Carter slips on some tunes.

"I have faith in you, Iris. You're a big hip hop fan. No pressure," Carter says. "Do you know the name of the frontman of A Tribe Called Quest?"

"I can't remember," Iris says. "My brother would be ashamed of me"

She misses the next two questions in a row, and the time starts ticking down.

"What record label is Lil Wayne on? Here's a hint: He says it a lot in his songs," Carter says." Actually this is one of his songs playing now, he might say it here."

Iris mutters to herself, "I still have six more blocks to go. I can make it."

At that moment the robotic GPS voice comes on, blocking out the sound of the music, "Turn right in a quarter mile."

"Alright we're here," Carter says. "Last question." He parks the car and pulls out a disco ball from the dashboard, setting it on the arm rest. He hits a button and it lights up.

"Can I caveat the last question?" Iris says. "I was up till 2 am, working 70 hour weeks. I'm on a fruit diet. I just wanted to put that out there."

"Yes! You win again." The duo stepped out of the car and Carter pops his trunk to give her a prize. Then he asks her to pose in front of his mustache -- all winners get an Instagram shot. 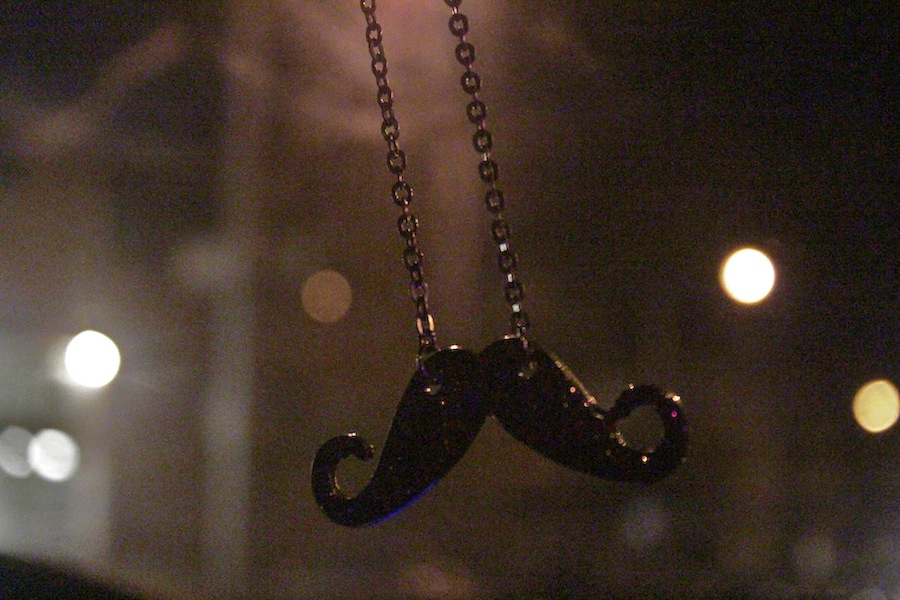 Carter is a prime example of why the people who convert to Lyft love it. It's a different type of transportation experience, one where riders and drivers are fellow colleagues in the sharing economy.

Can you imagine a taxi driver theming his ride "hip-hop" and playing trivia games with passengers? It's doubtful the taxi company would approve of that, and it might seem weird to anyone who jumped in the car. But with Lyft, when you're encouraged to ride alongside the driver in the passenger seat and fist bump to say hello, it makes perfect sense.

Likewise, it's difficult to imagine a taxi driver building a personal brand from within the company. Micro-entrepreneurship in the sharing economy is much more feasible. Individuals are leveraging their own cars -- or housing in the case of Airbnb -- to make a little extra money, so why not take it a step further and leverage themselves?

That's how Carter came up with Hip-Hop Lyft. He didn't pick that theme out of a hat. When he first started giving Lyft rides, he would play old school hip hop, because that's what he loved to listen to. Passengers enjoyed it so much that Carter wondered what other things he could introduce to make his ride stand out. Carter says, "I went home and told my girlfriend, 'People love my playlist,' and she said, 'You know a lot about hip hop music. Maybe you should do something with it.'"

Thus, Hip-Hop Lyft and the accompanying trivia games were born.

The next two drivers to hop in the car were headed home from dinner at a friends. Carter explained why a reporter was following him that night and the woman's eyes lit up. "I have a good Lyft story for you!" she says. She then described the time she called a Lyft and an older man in a nice Mercedes pulled up. When she asked him why a Mercedes owner moonlights as a Lyft driver, he told her he was retired, and he did it to meet people.

Then she asked Carter his craziest Lyft passenger story. What entailed was an epic tale that last 15 minutes and had us all in fits of laughter. Carter was a natural storyteller: He knew how to build the narrative tension, and held the kicker for the end. 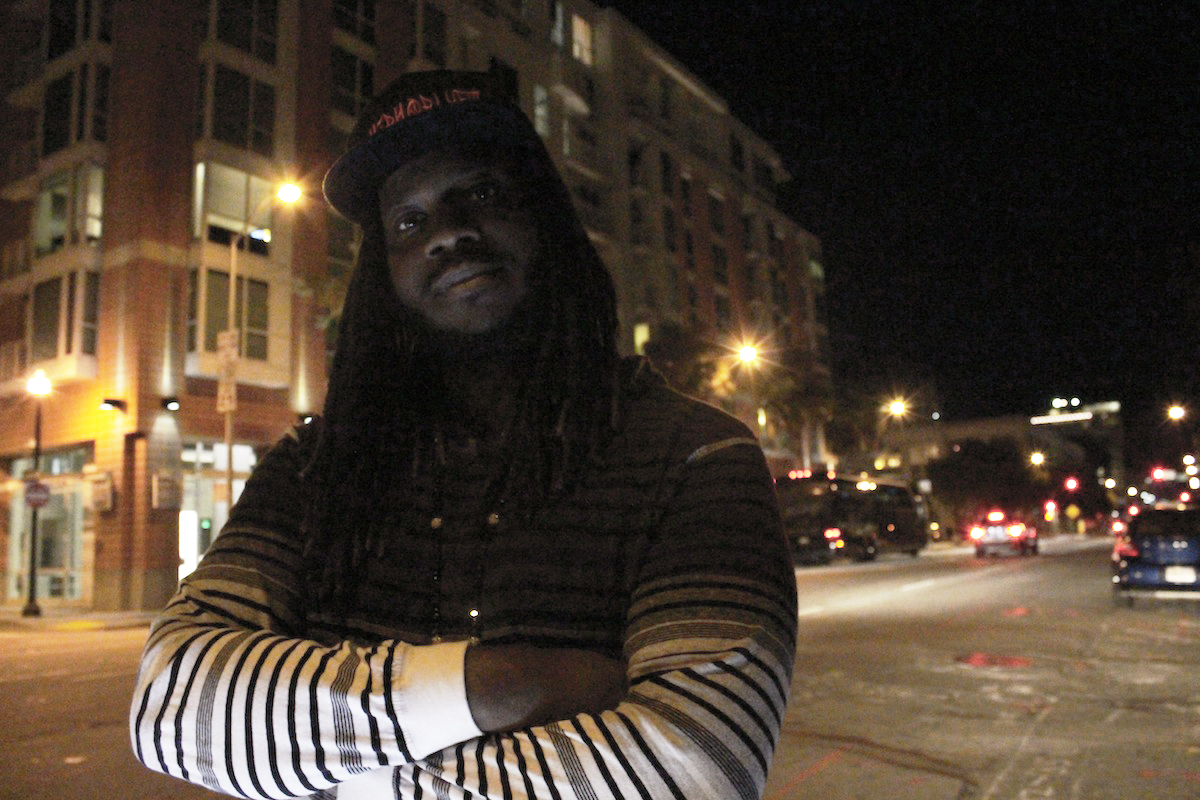 Carter is a stay at home dad, watching after his two-year-old son while his partner works during the day at a non-profit. Lyft was a perfect way for him to make some money on the side, driving nights but still raising his child. Carter says he pulls in about $800 per week, driving five hour shifts Wednesday through Sunday. He can clock in and out when he chooses, so the flexibility suits him.

"I'm having so much fun. I'm like a roll-in party," Carter says. "I'm blown away by the popularity of Hip-hop Lyft in the city." His fans want to be able to personally request him for rides, but the Lyft app isn't built for that. He's figured out a workaround though. He does what he calls "private parties," where people will Facebook him the time and place to be. He'll show up, and they'll request a Lyft at that moment. That way, Carter is the closest Lyft driver and can accept the gig immediately. 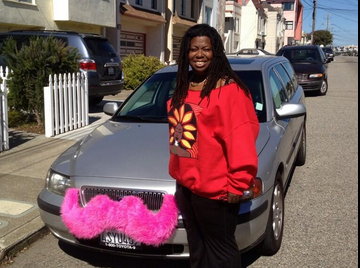 When asked whether he pockets extra money for such jobs, Carter defers. "As far as extra, not really," he says. "I just do it, because I love doing what I do, and I have a real passion for it." Bonus: Carter's mom, who is retired and a student, drives Lyft to make a little extra money too. They're Lyft's first mother-son team.

Lyft recognizes that Carter represents a whole branding opportunity for them. He's won several awards, from the "golden mustache" that hangs on the front of his car for best themed Lyft, to the "golden fist bump" prize for embodying the Lyft idea.

Now that Hip-Hop Lyft is starting to take off, Carter is hoping to parlay it into a TV show like "Cash Cab," a web show, or a radio DJing gig. That would be his ultimate dream. "I believe doors open for people all the time. Doing this you meet a lot of people and you never know," Carter says. "It may lead to something. I'm just gonna ride it out."

The last couple we rode with were newbies to Lyft -- one of them had just moved out from New York. The duo had gotten most of their hip hop answers wrong. After we pulled up to their stop, Carter played nice with the final question.

"What is the name of Kanye West and Kim Kardashian's baby?" He says.

"That's right! You guys get prizes." Carter says. "I guess I'm gonna ruin it for every other Lyft driver."

[Photos by Carmel DeAmicis for Pandodaily]

Little things can eat up big chunks of your time. Sage One takes things off your plate. Get to the real work. Learn more. (Sponsored message)