Superhero laundry founders launch startup to prove a point, then shut it down once they succeed

Michael Dunworth, Yanni Giannaros, and Chris Baker came up with the idea for a superhero laundry delivery service when they read about a recent YC grad called Prim. Prim picks up people's laundry and delivers it back to them 48 hours later. "We were curious why YC would back such a company," Giannaros says. "It's a laundry service that isn't unique."

At the time, the trio had a few other projects in their back pocket. They had leased a Hacker House to rent out bunk beds for cheap to fellow entrepreneurs in transition in San Francisco. They were making enough money to cover their own rent and fund their main venture -- snapCard, a bitcoin company. But they wanted to have a little bit of fun on the side, and start a company just to see whether they could improve on another's design.

"Maybe we were just envious of Prim for getting into YC, which is so prestigious, but there's nothing special about them." Giannaros says. "We thought we'd try something much cooler, and we gave it a go."

Thus, Your Hero Delivery was born. The three guys would do unlimited bags of laundry for $20 and get it back to you the same day, beating Prim's terms ($24 for one bag of laundry, 48 hour turnaround). And they would do it all wearing superhero costumes. Chris was Batman. Michael was Superman. Yanni was Spiderman.

Your Hero Delivery launched August 28th, saw major traction and success, and shut down a few weeks later. Why you say? Well, along the way the founders realized that dirty laundry, although a potentially profitable endeavor, was just not where their hearts lay. This is the story of superhero laundry's quick rise and even faster fall.

You may think that the costumes are a silly gimmick, but startups with clear visual gimmicks are more likely to gain traction with users. Just look at Lyft and Sidecar for a comparison. The giant pink mustaches adorning cars around the city serve as cheap marketing for Lyft, piquing people's interest about what the mustaches are all about. Plus, they're an effective branding tool. Whereas people might feel uncomfortable getting into a stranger's car for ride-sharing, they'll feel a little better about it if said stranger has a giant pink mustache, proving their association with the company.

The same goes for randos picking up your laundry in superhero costumes. These guys aren't associated with a professional laundry service, but hey -- they have costumes on. That's official enough, like a work uniform. And if the service had scaled and people got used to seeing superheroes all over the city tugging laundry bags, it would have spread the company's message and propelled their traction.

Your Hero Delivery's founders thought about all this. "We looked at Lyft for inspiration when building a community because without their community they would be nothing," Giannaros says. Plus, it makes the banality of starting a laundry startup just a little more interesting. I

In fact, when they initially pitched me the story that's why I wanted to write about it -- so there's something to be said for branding gimmicks getting you press coverage.

Take note, bright-eyed future founders: When these guys launched their startup website, they posted it to Reddit. Genius marketing. It rose to the top of the SF subreddit and brought 5,000 hits in a few hours to their website. 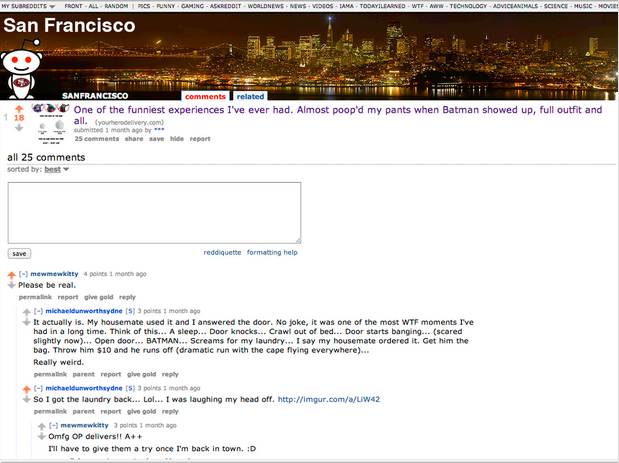 That only garnered them a handful of orders the first week.  "But everyone had such a great experience that the viral factor happened. Everyone was yapping to their friends because they found it really funny," Dunworth says. "By the next week we were getting 5-10 orders a day." Kids would pester their parents to order from Your Hero Delivery, because they loved the costumes. "But we'd also get 28-year-old guys who work at Google who were just laughing," Dunworth says.

In classic startup fashion, the founders hadn't totally nailed their operations yet. It takes a little while for a young company to sort itself out, but if your startup takes off with users quickly there's not much time to figure that out.

The orders started flooding in. "It got to the point that we'd be scared whenever the phone would ring," Dunworth says.

"For some reason, we just used Chris' phone to take orders," Giannaros says. "We eventually used a website service. But in the beginning, it was Chris' phone, and his phone was blowing up all day long."

"Chris' phone would go off at 3 in the morning," Dunworth says laughing. "He would wake up in the middle of the night and answer the phone, 'Hello, Batman speaking.'"

They were shlepping laundry all day and all night. They would wake up at 5 am to start picking up orders, and be out till 10 pm at night. "Yanni's car was full of dirty laundry like a rubbish bin," Dunworth says. "To this day it smells like fabric softener."

Meanwhile, their actual passion project -- snapCard, a single click checkout that would allow people to purchase items on any website using Bitcoin -- fell by the wayside. They started to wonder what they had gotten themselves into.

One busy day they got 34 orders, which the three of them had to keep straight and fulfill. If they wanted to keep running the business, they would need to expand -- raise money, hire drivers, deal with W-9 paperwork, and set up delivery systems.

It would require a real commitment. The founders had started the company as a novelty side project -- to see if they could do what Prim did faster and cheaper. "It was for ourselves to prove it could be done better," Dunworth says. "We reached that goal and realized we could turn it into an international business if we wanted. But is that what we want?"

Many entrepreneurs might hear this story and think there's only one right answer: Scale the business. After all, you've hit on a successful idea that clearly meets a need and brings in revenue. It's the ultimate Silicon Valley dream, why not run with it?

"At the end of the day, did we really want to spend our whole lives shlepping dirty laundry?" Giannaros says. "No." 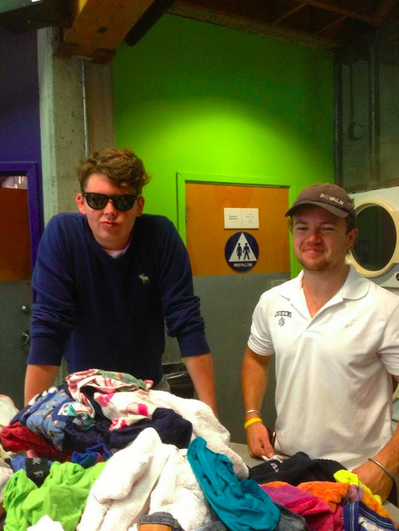 The tipping point came on Labor Day, also incidentally Baker's birthday. All the laundry service shops were closed, and the trio had to race around town to find a laundromat and wash all the clothes themselves for the first time. They spent their whole Labor Day surrounded by heaps and heaps and heaps of dirty laundry.

"People would be looking at us and would say, 'Guys that's not how you fold a shirt.'" Dunworth says. "Oh my god, if my mom could have seen me. It's probably more laundry than I've ever done in my life."

That was the breaking point for the guys. A few weeks later they put up a sign on their website that said, "We might be in business in the future, but we are no longer processing orders."

Are you building something passionate about that you believe in? It's a question that perhaps founders don't ask themselves as often as they should. Sometimes, it's not just about success, traction, or money. And at the end of the day, Your Hero Delivery founders felt a lot more passionate about Bitcoin than they did about laundry. "Bitcoin is a huge market opportunity," Dunworth says. "If we can facilitate people being able to use it easier than that would be awesome. Because we think Bitcoin should be allowed everywhere."

And as for the laundry service? Giannaros says, "At least we got some Halloween costumes out of it."