From prototype to production: How Dragon Innovation's "Kickstarter for hardware" aims to change consumer tech

Scott Miller's early days in the hardware world were a tinkerer's dream. In the mid-90s, he worked on MIT's first "robofish," a robot that swam like a tuna. Then Disney Inc. decided, briefly, that it was really into robots, so it hired him and 12 colleagues to operate an independent startup office out of Boston.

"They gave us an insane budget," he recalls, which he used to purchase top-of-the-line equipment and build impractical but very cool things like a 12-foot long walking dinosaur. "It was like Stompy except it worked," he says. Then iRobot, owned by Hasbro, hired his team to build an R2D2 robot. George Lucas's licensing team unfortunately put the kibosh on that project before it made it to the Toy Fair.

It was at iRobot that Miller fell in love with walking into a store and seeing the thing he built on the shelves. He had worked on My Real Baby, and then hugely successful Roomba. (Also, the less successful follow-up, the Scooba.)

After a stint in China, he became known as one of those "fixers" that venture capitalists would call when their hardware portfolio company needed help. In recent years, his services have been in higher demand than ever. Perhaps you've heard, we're in a hardware revolution.

Or renaissance. Or revival. Whatever you want to call it, hardware is cool again, to entrepreneurs, to investors, to the press.

Ironically, the movement has been fueled by Kickstarter, a site that wants little to do with the buying and selling of gadgets. Miller has watched the movement grow as a consultant.

This Fall, Miller jumped into the mix in with his own answer to Kickstarter, launching a hardware-specific crowdfunding platform called Dragon Innovation.

Until recently, hardware had been out of vogue in the startup world for almost 15 years. It's capital-intensive, and, as Marc Andreessen recently pointed out, "there are so many ways hardware can blow up in a non-recoverable way." The cost of launching a software startup, on the other hand, has shrunk to around $5,000.

So large corporations picked up the slack during that time -- the hardware innovation has lived under the roofs of companies like H-P, Samsung, Apple, Compaq and Cisco. But as these cycles go, large stalwart companies get complacent, and scrappy young innovators see an opportunity to build something disruptive and cool. Robots. Drones. 3D printing. Wearables. Hardware has come roaring back as a category in the past two years.

The story is famous now. Investors rejected Eric Migocovsky's idea for a "smartwatch" that syncs with a smartphone. They didn't like the idea and they didn't like hardware. So Migocovsky listed his product on Kickstarter with a target fundraise of $100,000. The response was overwhelming. Pebble met its goal in a matter of hours. 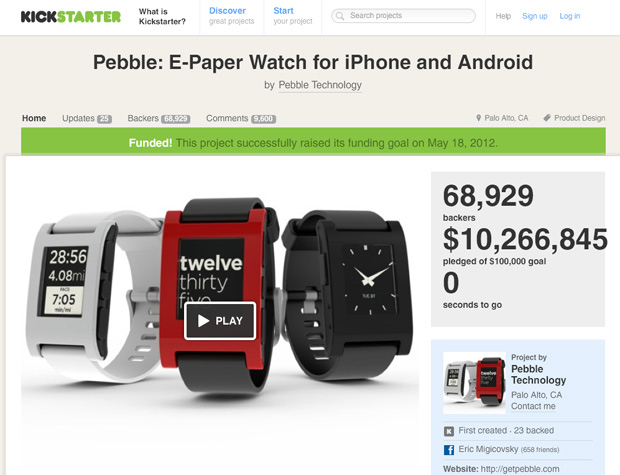 Suddenly VC's were begging to invest in Pebble. According to legend, Migocovsky would start each investor meeting by opening their Kickstarter page on a laptop. At the end, he'd refresh the page, showing hundreds of thousands of dollars in new pledges that had come in during the hour-long meeting.

Pebble handily raised $15 million in venture capital on the back of the Kickstarter campaign, which itself netted it $10.2 million. The crowdfunding had proved there was serious demand for Pebble's product. But the hard part wasn't raising the money. Now they had to turn their prototype into a working product, and they had to ship thousands of them. That involves figuring out a whole host of problems that the founders of, say, a photosharing app, never have to deal with. Materials. Costs, China. Packaging. Shipping.

Pebble wasn't alone in its "oh shit, what do we do now?" moment. As many other hardware projects grappled with these issues, Kickstarter experienced a backlash. At one point, a backer sued over a failed project.

Kickstarter made stance on the issue crystal clear in September 2012 with the terse declaration that Kickstarter Is Not a Store. The site's founders wrote:

It's hard to know how many people feel like they're shopping at a store when they're backing projects on Kickstarter, but we want to make sure that it's no one.

Message received. Kickstarter wants to be known for its contributions to creative fields like art, film and music, not the commerce and gadget industries. If the gadget stuff happens to find success on the platform, so be it, but that's not who Kickstarter was built for.

Still, Kickstarter's impact on hardware innovation is undeniable. Crowdfunding allows companies to validate their product-market fit and price point, as well as get some cash up front and a little earned marketing to boot. "Kickstarter inverted the paradigm," Miller says. "Now you can sell before you build."

The selling is the easy part. The building? Not so much.

That 15-year gap in hardware startups also created a gap in the culture and knowledge around the category. Andreessen noted the importance of experienced hardware mentors from the prior generation at a recent PandoMonthly. “(Entrepreneurs) need that hardcore, hardbitten angry ops guy who is used to yelling at vendors and working on FedEx on shipping costs and all the really nitty gritty stuff to make this work,” he said.

Andreessen is talking about the Scott Millers (though, personality-wise, Miller is more soft-spoken and friendly than the "angry ops guy" archetype). But his resume is hardcore, and his connections to China and experience in scaling hardware products can make the difference in whether a hardware company sinks or swims. Through his consulting agency, Miller has helped companies like Romotive, Orbotix, MakerBot and Pebble grow into real businesses. 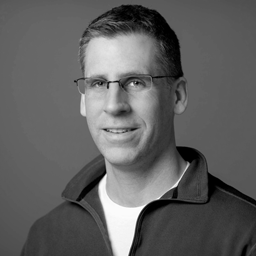 In recent years, venture capitalists have been coming to him for advice on how to scale startups in their portfolios. Many of them were Kickstarter success stories, with founders who didn't understand the fundamentals of a hardware business. They hadn't raised enough money on Kickstarter because they didn't know how expensive their build-out would be. They had no idea where to start with manufacturing in China, and they didn't have a business plan.

Miller saw the opportunity to help these crowd-funded hardware companies in a bigger way than through his consulting business. So he raised $2.3 million in venture funds from Foundry Group and Flybridge Capital to build his own hardware-specific crowdfunding site. Dragon Innovation launched with eight campaigns in August.

The mission is to do all the stuff Kickstarter wants nothing to do with -- the hands-on business strategy.

With each campaign, Miller's team does a "deep dive" to forecast and vet the product and team. That typically takes four weeks. The biggest piece of the forecasting puzzle is China. In some cases, it makes more sense to manufacture the products in the US. But generally, successful hardware companies need to partner with a Chinese manufacturer, a process which requires connections and experience. "You can't Google what we do," Miller says.

China "fixers" like PCH and Riverwood Solutions have been around for years, but they don't share the names of their Chinese factories with their clients because it would cut out their middleman status. Their model is to take kickbacks from the factories for sending them business, so they're not incentivized to help entrepreneurs fight for the best price or service.

Dragon hopes to solve that conflict by remaining completely transparent. The site takes no kickbacks, so its companies can work with any factory out of the 100-plus factories which Dragon has relationships with. Companies on Dragon's platform can choose one of the site's partners, or go it alone. If they want Dragon's help after the funds, they pay a retainer fee. (Dragon also takes a fee from successful crowdfundings, similar to Kickstarter.)

One big challenge is to figure out the exact right amount of funding to raise for each company. The deadliest situation is for a company to get successfully funded, but with not enough money to deliver its products. First-time hardware founders rarely know every single thing they need to take into account for their costs.

Scaling will also be a challenge, since Dragon takes such a hands-on approach with each campaign. Miller says his team is developing a formula for helping companies since they tend to ask the same questions of each one.

His goal is to have the best success rate for crowdfunding campaigns with an equally-as-strong track-record of delivering products on time. He argues that it is easier for hardware companies to stand out on his platform, since there are fewer projects to weed through. Tech campaigns on Kickstarter have one of the lowest success rates, at 34 percent. The majority of them ship late.

On Dragon, the Tessel Machine for software developers beat its fundraising goal, as did the Dash, a a robot kit, and the Ollie, a multi-use tool. Of the three live projects on the site, the Hammerhead bike navigation gadget appears poised to hit its goal. Miller says Dragon's projects have topped a 50 percent funded rate in the first month.

Dragon would like to provide end-to-end services, including one thing the site currently doesn't hep with, distribution. The ultimate goal would be to sell items on Dragon Innovation's site, too.

Yes, the hardware revolution is upon us, and yes, it's fueled by crowdfunding. But there are a lot of steps between funded prototype and functional business. If the revolution of today becomes more than a trendy fad, it'll be because hardware vets like Miller and his peers have had a hand in it. ⚛

Miller appeared as our guest this week on PandoWeekly. Listen here.

[Disclosure: Marc Andreessen is an investor in PandoDaily.]

Update: This post previously stated that backers had sued Kickstarter over failed projects; it has been corrected to show that a backer sued the person responsible for the failed project.