Bonobos co-founder and CEO Andy Dunn may be building an ecommerce company, but his role model isn't fulfillment-obsessed Jeff Bezos. It's the man most people call the greatest merchant of our time: Mickey Drexler.

In the same way that Drexler took the Gap's strength around jeans and expanded from there, Bonobos was originally centered around better fitting pants and expanded from there. The Gap was an aspirational but approachable lifestyle brand that represented 1990s American casual cool. Bonobos has similarly sought to represent more than just pants that fit, but a certain je ne sais quoi to the Bonobos man. Drexler pioneered vertically integrated fashion lines; Bonobos does the same but centers it around ecommerce delivery and fulfillment.

One of Drexler's biggest achievements at the Gap was building a portfolio of brands that could leverage what the Gap did well but spoke to different customers. Dunn, too, has been obsessed with this idea.

Bonobos has expanded about as much as it can in the world of menswear -- it even has a golf line, for Christ's sake. Over the last year, Dunn's inner Drexler has been pushing him to take on the only business he fears is harder then men's fashion: women's fashion.

Today, Bonobos is announcing a new women's line called Ayr. The line will be focused on a limited offering of high-quality, mid-market priced essentials of a women's wardrobe. Not the hot trends but the signature pieces that can be worn forever. It's an exact reaction against the obsessive fast (and cheap) fashion trend that's been dominating the retail and subscription commerce world.

"We are jumping straight into the lion's den," Dunn says. "Like the origins of Bonobos, we think if people can trust us to give them better fitting jeans, that'll be the beginning to building a great brand."

Ayr is little more than a splash page to the outside world. This fall, it is going to release a limited 1,000-unit run of jeans. They'll do some small in-person events where women can try them on and give feedback. They'll tweak the results based on what they find, then properly launch the new line next February with jeans, sweaters, silk tops, and a few other key pieces.

The entire budget for this is less than $1 million. Dunn has learned from past bets he made that were too expensive: Most notably, his attempt to build better ecommerce software, that lead to divesting his Palo Alto engineering group earlier this year.

"It was big enough, we almost couldn't bear the cost of failure," he says. "We went from 15 engineers to five, and it was a very stressful year because of that transition."

Still, Ayr is a crucial test that will speak to how big Bonobos can become, and whether or not Dunn has the chops to become a latter-day Drexler. It'll prove whether they've hit on some new way of merchandizing and fulfillment that can be transferred to a portfolio of brands, or whether Bonobos was simply lightening in a bottle around men's pants and doomed to remain a mono-brand company.

Given that the company has raised a heady $73 million, it's an important test. It's not a bet-the-company-move in terms of money, but it will determine Bonobos's future potential.

I asked Dunn if he was scared, and there was no false, macho founder bravado. "Yeah," he says, almost breathlessly. "I'm just as nervous as when I launched Bonobos." 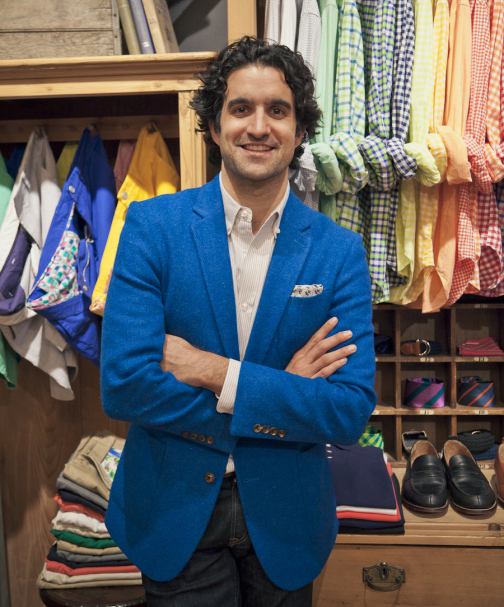 Don't worry, ladies: Dunn won't be designing your jeans. Dunn's entrepreneurial journey has been all about finding the right people at the right time.

It wasn't his idea to make a new ecommerce brand around better fitting pants -- it came from Brian Spaly, his friend and business school classmate. Dunn just recognized it as a good one, jumped on board, got the financing, and built a company around it.

So over the last few years as he's mulled the idea of building a women's brand, he knew he needed a new Brian Spaly. (Only hopefully one he could work with slightly longer.) Last fall he became convinced that person was Maggie Winter, a senior merchant in the women's retail division at J. Crew.

Dunn first heard about Winter from his executive assistant, who had friends who worked at JCrew and were always raving about her. And who did Maggie Winter report to? Who was her mentor? Mickey fucking Drexler. Perfect.

Dunn was intrigued and asked his EA to fish around for an intro. She asked around and came back and told Dunn that Winter was happy at J. Crew and wasn't looking to make a move, but was happy to grab coffee.

"Famous last words," thought Dunn. "I love when I hear that."

Within one conversation, Winter was hooked on the opportunity. The two met back up a few weeks later, and Winter brought a sketchbook that showed how how she envisioned a new women's line. Within months, she quit J. Crew and was working at Bonobos.

Her first job was hiring a designer. She told Dunn the perfect person was Jac Cameron, but she was ungettable, so they should find someone like her.

"Maggie," Dunn said. "Famous last words..." Within a few months Cameron, too, was on board.

"I didn't realize at the time that was just a challenge to him," Winter says. "Andy thrives on impossibility. The trick with him is to tell him he can't do something, and he'll move mountains." 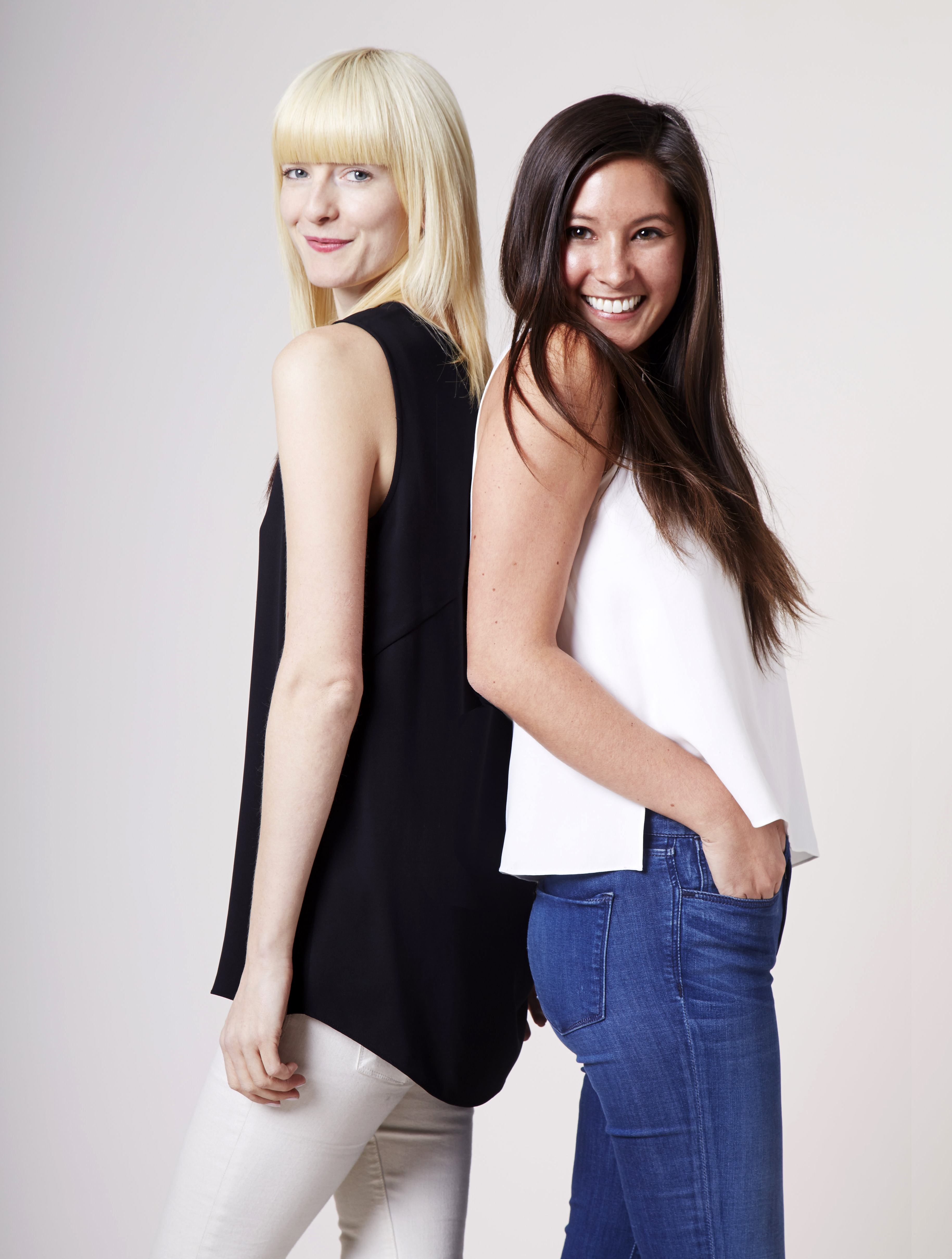 Dunn is persuasive, sure. But Winter and Cameron weren't as impossible a sale as advertised: The two had dreamed before about what they would do if given the opportunity to build a line from scratch.

Sitting on a park bench in the East Village months before Dunn approached either of them, they day-dreamed about the perfect women's brand. The jeans would look like this... the T-Shirts would look like that... The store would feel like this when you walked in...

The shock was that someone was actually handing them a checkbook and the ecommerce and fulfillment know-how to go do it. In the old retail world where both of them had built their careers that just doesn't happen. To make this fuzzy daydream come true the two non-techies had to leave better known brands and jump onboard the etail economy. Even in 2013, some of their co-workers worried it was career suicide.

"Some of them looked at me like I had three heads," Winter says of telling her colleagues at J.Crew the news. "I don't know if they thought this online thing was a flash in the pan or what."

The person she cared about the most got it and gave her his blessing: Her boss, Mickey Drexler. "There is no greater merchant in the world," she says of her time working with him. "He understood this was something I had to do."

Does the retail world need another pair of $100 jeans? It's hard to know until we see them. Winter says Ayr is on the forefront of "denim technology" with both fit and fabric. When JBrand first introduced its skinny jeans, she says it had 2 percent stretch. Ayr's jeans have a whopping 30 percent stretch. "It lifts where you need to lift but doesn't pinch," she says. (Our male readers likely have no idea what any of this means, but our female readers do.)

She's had everyone in the office try on the jeans to see how they work on different body types, including one of the men. "He looked great, even if it was a little too Williamsberg," she says.

Fabric aside, Ayr has the same advantage Bonobos did. Because they aren't having to stock retail stores, they can offer some 50 combinations of fit between long inseams, short inseams, waist sizes, and three different cuts.

Dunn and Winter certainly talk a good game about the new line. I love the idea of a single place to go for mid-priced, high-quality essentials I could wear season after season. (Winter admonished Dunn for calling them "basics." "There's a difference!")

But a lot of brands have tried to be that. The Gap and J. Crew would argue at various times, they've been the place for high quality basics.

Right now, I have brands that are go-to's for jeans, for T-shirts, for easy maxi-dresses -- but no single destination for all of the above.

Are women's taste, aesthetics, and fit just too variable for one place to be all of that?

Maybe. But at the same time, I think Winter has identified a hole in the market. She and Cameron are 30 years old, and they want a brand they can wear for the next 10 years of their lives. It's not about a girl just out of school with no disposable income who is chasing every trend. That's been done to death in recent years. This is about a busy woman roughly 25-45 years old who needs the same outfits to go from work to play and needs to shop and dress efficiently, but look great.

They will tightly curate their line, with 75 pieces in the first season. She describes one piece as "a long blazer that makes every single outfit look like you added $2,000 to it." There are also flattering silk t-shirts and items like the perfect cashmere sweater.

She and Dunn get one thing that so many people trying to build fashion brands do not: This whole idea that women live to shop is kinda bullshit. Dunn has been told for years by (male) investors that a female Bonobos wouldn't work because Bonobos took the pain out of shopping and women love to shop. "Men think a woman's best day is when they say, 'Here's the credit card and go to Fifth Avenue!'" Winter says.

Forget for a moment that most women I know simply don't have time for a day of shopping, it's not the world's best experience.

"You're in this tiny room and the mirror is at the least flattering angle ever, and you always wear the wrong underwear and the wrong shoes, and it's raining and there's some male clerk who is trying to help you but doesn't know what you want," Winter rants.

Dunn remembers one day, Cameron and Winter went to SoHo to canvas the market, and they came back furious. It was a sign to him that they were onto something with this insight.

With such a focus on simplicity and a limited line, there's a huge internal pressure on quality. Next February, we'll see if Ayr can deliver better essentials for women, and Dunn can finally deliver this multi-brand dream for his investors.

[Photograph of Dunn by Meg Wachter]