Addy releases embedded maps widget, but Google is one step ahead

Addy is the sort of startup that people in America might not understand the point of. Users can drop a pin on a map location, add information like apartment number or parking instructions, and then send the map to people via a custom URL. Today Addy released its maps widget option, so businesses can embed the Addy maps they create on their homepage, instead of on a separate page. 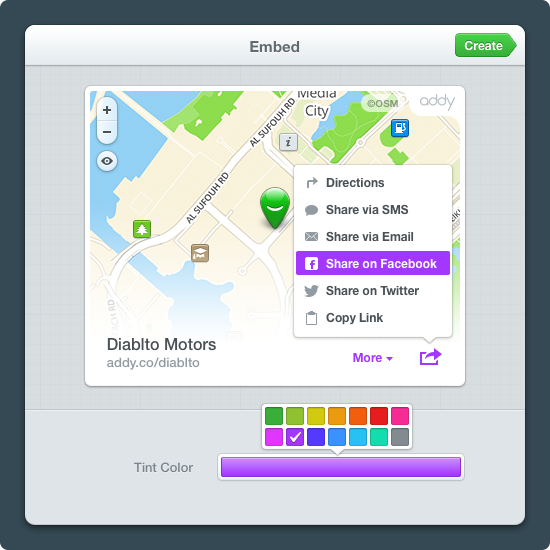 In plenty of developing nations around the world there isn't a standardized address system. I faced this myself when I moved to the United Arab Emirates after undergrad. When trekking around Abu Dhabi, people would give me directions like "hang a left at the Carrefour market and make a right next to the spindly tree. Then go through the roundabout and make your third right when you see the mosque."

As you might imagine, I got lost frequently, not a fun fate while driving a giant Escalade down tiny Abu Dhabi roads for the family I nannied for.

Addy's co-founder Khaled Naim grew up in Dubai so he understood exactly that predicament. He came up with the idea for Addy while attending Stanford's Business School. Part of the program requires an international trip abroad, so he hosted forty classmates in his home country over winter break. When he threw a party for them in his childhood home, they had a hell of a time trying to find it.

Thus the idea for Addy was born. Naim wanted an easy way to drop a pin on a map, anywhere, and add information to the map for people trying to find you.

Naim pitched the concept for Addy at Startup Weekend in the Bay when he returned. The pitch went over well and the company was accepted to Stanford's first student accelerator - StartX - summer of 2012. They raised seed funding from Dorm Room Capital in April of 2013, and released their first product in September.

They're seeing people use Addy in ways they didn't expect. For example, the largest Addy audience has wound up being in the United States. People are using it to show friends how to find them on a boat in the middle of a lake or out camping in the forest.

It's a helpful product, but that doesn't necessarily mean it's going to survive. Unfortunately for Addy, since March you can do almost all the Addy functions with Google Maps too -- the map creation, dropping a pin, embedding. March 27th is when Google introduced its Maps Engine Lite, which allows mapmakers to drop pins anywhere and write in notes about the location. The only thing Maps Engine Lite doesn't allow you to do that Addy does is customize the URL.

Addy makes the map making process more simple than Google Maps, and it might have a market with businesses who want to customize the URL of their map location. Short, customized URLs are easier to print on fliers and tweet after all. The company can also capitalize on business deals, letting enterprises in developing countries use its API for location plotting. Addy is doing exactly that, starting with a partnership with a Gulf transportation company.

But I doubt the company will be getting the consumer vote. It would be tough to get users loyal to Google Maps to jump to a new brand without a big differentiator in function.