Score one for the little guy: Court dismisses ComScore's patent lawsuit against Moat

Read this story if you hate egregious patent bullying. It's a tale of a startup that fought an unfair lawsuit and actually won. It only took 14 months, thousands of documents and filings, hours of depositions, a courtroom altercation, and a boatload of legal fees.

Last July, ComScore sued three startups for violating eight patents around ad viewability. This is an esoteric corner of the adtech market, but a meaningful one. Around 31 percent of online ads are not seen, either because they don't load right, the user never scrolls far enough to see them, or fraud.

ComScore is a publicly traded company with a market cap of $942 million. The startups, Moat, AdSafe (now Integral Ad Science), and DoubleVerify, were chosen because they were well-funded, but not too well-funded. ComScore did not sue Google, which also does ad viewability. Nor did it sue any of the myriad of very small startups offering some version of ad viewability. 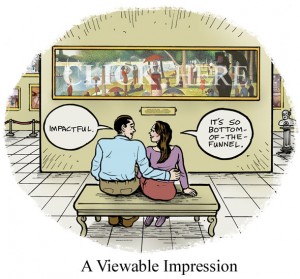 The patents were old and very broad. (This one originated in 1996!) Comscore did not even develop the technology itself. The company shelled out $7.6 million for seven of the patents in 2011 as part of a settlement with rival Nielsen. ComScore's argument in this case is that no other company than it could provide a service related to ad viewability.

The lawsuit was troubling for a number of reasons. ComScore had made some very loose claims about its own offering, having to add disclaimers to statements about effectiveness on its own website. Furthermore, ComScore had promoted its idea of “viewable impression” as a standard form of measurement to industry groups like the IAB. ComScore was on a committee which was working to determine the standard practice for the whole adtech industry around ad viewability. The company failed to mention that it was suing companies doing that very service.

In July 2013, two of the companies settled with ComScore. Moat continued to fight the lawsuit, counter-suing ComScore with some patents of its own (likely accessed by its hiring of conflicted patent aggregator RPX). Moat also accused ComScore of fraud for its promotion of the "viewable impression" standard while using patents for it to sue its industry peers.

Then things got exciting. (Unless you are a patent lawyer who is already titillated by all this talk of lawsuits and countersuits.) At an August deposition in Virginia, Moat's lawyer questioned ComScore CEO Magid Abraham about his relationship with his wife, who co-founded the company. Abraham became angry about the line of questioning and physically confronted (or threatened, or assaulted, whatever word you prefer) the lawyer. From the court reporter's statement:

After that incident, Moat moved to have the case adjourned, but was denied. The trial went on and concluded last week. On October 28, Judge Stephen E. Noona ruled to dismiss the case with prejudice. That means ComScore lost, and it can not sue Moat again with these patents. Each company is left to bear its own costs.

A Moat representative declined to comment beyond the following statement:

comScore, Inc. v. Moat, Inc., EDVA Civil Case No. 2:12cv351 has been dismissed with prejudice. No money changed hands and no licenses were granted.

Thus putting an end, for now, to the ad viewability wars.