Pay by tweet: How new startup BitWall is using bitcoins and social currency to monetize the web

On Friday, people who visited The Dish Daily site might have come across a surprising new prompt. It asked them to tweet a story in order to access it -- a feature of a new startup called BitWall. 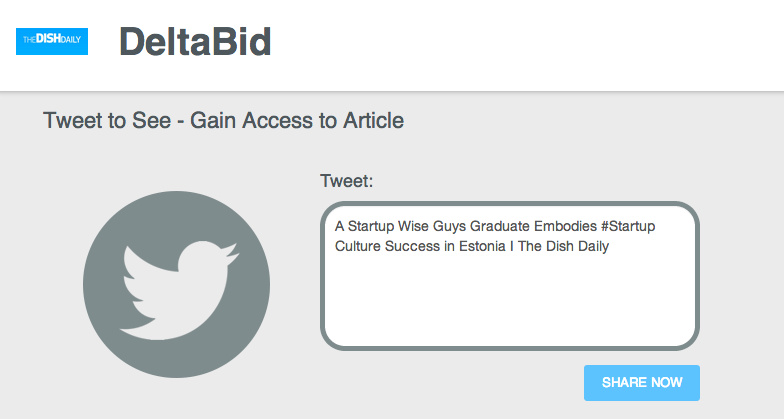 BitWall is a type of paywall, put in front of articles. But this isn't your average New York Times paywall, where subscriptions are necessary. Instead, with BitWall users have four choices for making the "payment." They can tweet the story out, pay in bitcoins for a full day access to the site, pay in bitcoins just for that one article, or choose to watch an ad.

The founder, Nic Meliones, used the concept to win the 2013 Bitcoin Hackathon and get accepted to Adam Draper's accelerator Boost.vc. Now, months after finishing the program Meliones has assembled his team and they're starting to pitch publications on the product.

The Dish Daily was the first company to use them, putting up a BitWall Friday in front of select articles. The BitWall is customizable, so organizations can choose what forms of payment they want to offer users. The Dish Daily stuck with just the tweetable option.

BitWall is the latest in a long line of companies trying to save journalism. From the failed venture of NewsTilt to the shuttering of Backfence, a lot of techies have come along trying to figure out the monetization-salvation of media.

BitWall is the first trying to save journalism with the intriguing premise of social currency -- paying through tweet. After all, the more page views a publication gets the more they can charge advertisers. If the model works, the free social marketing may very well be worth the same as a paywall.

But BitWall isn't the first with the pay-by-tweet idea. In fact, the aptly named Pay with a Tweet was first, launching way back in 2010. Pay with a Tweet didn't target media organizations specifically. Instead it targeted companies hoping to get more social media buzz for their products.

Other companies have used tweets as micro payments for certain promotions. For example, a Burger King in Mexico gave people hotdogs for a tweet. There was even a Tweet shop in London where you could buy things with tweets, before it shut down.

But this is the first time that model is being applied to articles on the Web, which is where tweets as micro-currency make the most sense. After all, bringing more people to read a story can directly correlate with how much advertisers are willing to pay for placement on your site.

For companies that just choose to offer the choice to tweet a story, as The Dish Daily did, the model may backfire though. As we've written about before, consumers are very aware that their social media practices matter to brands.

They may not be willing to stand behind an article -- going so far as to tweet it to their followers -- before they've even read it. And some might find the tweet-payment off-putting, which would be detrimental to media organization's brand and integrity. Granted, they can choose to watch a video advertisement instead but that may not assuage the sense of manipulation.

Like most journalism monetization efforts, startups are still swinging in darkness trying to find the solution. Time will tell if BitWall has found one potential answer.