By Erin Griffith and David Holmes , written on November 19, 2013

Twitter's investors weren't the only VC's cashing in on the company's IPO.

Certainly general partners at Spark Capital, Union Square Ventures, Benchmark Capital and Charles River Ventures celebrated their success in the deal. They were Twitter's initial investors, and they made hundreds of millions of dollars on the IPO. Later investors like DST Global, Kleiner Perkins and JPMorgan, as well as angel investors like Rizvi Traverse, Chris Sacca, Jim Clark, Marc Andreessen, Naval Ravikant, Ron Conway and Jeff Bezos all threw another bag of gold coins into their Scrooge McDuck vaults last month, too.

But there is a whole subset of investors who will also be making money on Twitter's IPO, even though they never invested in Twitter. They found themselves holding Twitter shares through a simple means that hasn't been widely discussed: They sold portfolio companies to Twitter.

Twitter has purchased 29 companies over the last five years; most deals have been done in all-stock transactions. That means any shares of acquired companies turn into shares in Twitter.

Many of these deals were very small acqui-hire deals, where investors may have even lost money on the deal value. But because the deals gave them shares in Twitter, which increased wildly in value over the last five years, many of them wound up making a solid return on their investments, long after the companies they backed have been shut down and folded into Twitter.

This is a more pronounced trend than in the past because private-to-private transactions are a lot more common. Companies are taking much longer to go public, and secondary markets made what was once and illiquid and hard-to-value stock more "tradable." Beyond that, the war for tech talent has made acqui-hires the de facto ending for early stage companies who don't get their footing.

It makes you think twice about who you sell your startup to, even if it's a "soft landing" deal. It is better to wind up with shares in a private company that might go public one day at a much higher valuation than to get shares in one that's already public, and presumably fairly valued by public shareholders. Besides, many public companies will pay for acquisitions in cash.

Take Bluefin Labs. The company sold to Twitter for $80 million in February of this year. Twitter's paper valuation was just under $10 billion this year during secondary sales; its last institutional round had placed its valuation at $9.25 billion. Eight months later and Twitter's valuation more than doubled, topping $20 billion in the public markets. Bluefin investors Softbank Capital, Time Warner Investments, Acadia Woods Partners, Redpoint Ventures, Jim Pallotta, Brian Bedol, Dan Gilbert, Lerer Ventures and Kepha Partners, as well as the company's founders, all did pretty well in the deal.

For a non-Twitter example, look at Venmo. The company sold to Braintree for $26.2 million in 2012, producing a solid base hit return on its undisclosed amount of venture funding, but not a home run. But then Venmo's investors, including RRE Ventures, Betaworks, Founder Collective, Dave Morin, Sam Lessin, Dustin Moskovitz, VaynerMedia, Lerer Ventures, Accel Partners, and Greycroft Partners, got shares in Braintree, which this year sold to Paypal for $800 million.

There's also Mailbox. In February, the hot email app sold to Dropbox just one month after launching. At the time, people accused it of selling out too early. But the company's investors (SV Angel, Charles River Ventures, Kapor Capital, CrunchFund and Matt Brezina), not only got a nice cash return in the $100 million deal, they got shares in Dropbox, which was then valued at $4 billion. Now, eight months later, the company is raising funds at a valuation of $8 billion. It'll go public at an even higher valuation than that.

We made a little chart of all the investors which stood to profit indirectly from Twitter's IPO. It's not perfect, because some of these companies may have done all-cash deals. But it paints a picture of how wide-reaching the returns on Twitter's IPO go. 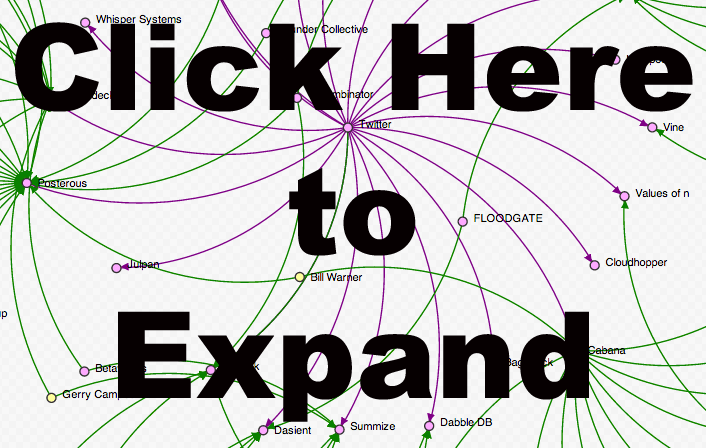 And in the name of service journalism, here are the hot private companies which are on the path to IPO. If you plan to sell your company for a mediocre return, sell it to one of these companies. (Some of them may be too far along in the IPO process though.) You might end up making your investors -- and yourself -- a respectable chunk of change after all.