Looking to help parents bridge the digital and physical, Moonfrye expands to Android and closes in on another $1.1M

Parenting has changed in the digital era, but they jury remains out on whether this has been a net positive or negative. For decades, parents have used TVs, then video game consoles and PCs, and most recently smartphones and tablets to placate their kids. But many parents harbor an element of guilt for pawning off their children on a digital babysitter, despite feeling relieved to have some peace and quiet.

Moonfrye is a Los Angeles-based startup aimed at solving this disconnect. The company was founded by Soleil Moon Frye, aka the actress behind “Punky Brewster,” and veteran internet executive Kara Nortman, both mothers of young children who were facing this very same angst. Moonfrye debuted its inaugural mobile app, which was iOS only at the time, in August of this year. The app centers around creating photo-based art around themes like mermaid, pirate, or BFFs. On Thursday of last week, the company expanded to support Android, a key step in its efforts to reach as many moms and kids as possible.

But the company has only revealed a fraction of its plan to date.

The big vision for Moonfrye, according to Nortman, is eventually to offer an entertainment and education experience that bridges the digital and the physical worlds. Today, kids and parents are confined to creating photo-art in the Moonfrye app. Users begin with a personal photo, then use photo processing technology to intelligently detect and cut the people out of these photos and then insert them into the Moonfrye artwork. Imagine a modern mobile collage creator, then add in theme-based stickers, text, and a variety of other fun embellishments. Users can then share these creations across popular social channels or download the final creation to their mobile camera rolls and share via email or text.

"We knew that parents and kids have all these photos just sitting around and wanted to give them an avenue to craft them into a permanent memory," Nortman says.

The next phase for Moonfrye will see the company look to extend this experience to become a physical part of its users’ real worlds. Nortman explains that Moonfrye has already begun sending loyal users themed sticker packs as rewards for ongoing usage. But the real vision is to send users do-it-yourself craft projects associated with the themes users choose in the company’s mobile app. Like princesses or cowboys – let’s be honest, what kid hasn’t dreamed of being one or the other – and receive in-app suggestions of crafts related to these topics. Projects can be designed either for individual children, or for groups, such as those at an at-home birthday party or after-school play date.

There’s a number of reasons why this is a smart idea. One of the most powerful, although maybe the least obvious drivers of recurring usage, is the fact that young kids love getting mail addressed to them, but rarely receive any, Nortman says. This is something I’ve heard echoed by a number of kid-focused ecommerce entrepreneurs. 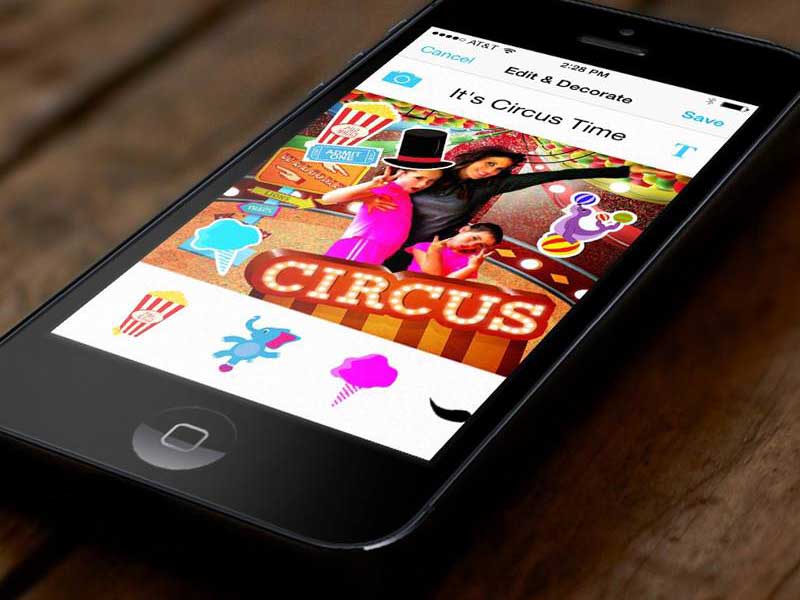 Secondly, as mentioned above, parents worry that kids spend too much time fixated on “screens.” To wit, limiting “screen time” is a regular topic among parents of young children and on so-called “mommy blogs.” Moonfrye is looking to give parents and kids a way to extend the narrative from a popular on-screen activity to one that can be continued in the real world.

Initially, Moonfrye’s craft projects will be sold on a one-off basis, but eventually the model lends itself to a subscription or membership model with new items being delivered on a recurring basis. That way, parents will have a “healthy” entertainment option available for that unexpected rainy day or sleepover. Nortman says the company has no immediate plans to go the subscription route.

Moonfrye has seen strong engagement in its early months, with more than 12 percent of users remaining active one month after the app is downloaded. This is more than double the Photo and Video category benchmark published by mobile app analytics company, Flurry, Nortman notes. Moonfrye’s two-month retention rate is more than triple the Flurry benchmark. Just as important is the fact that more than 10 percent of in-app creations are being shared socially, a figure that doesn’t even count those creations that are saved and shared via email or text. Moonfrye is counting on this level of loyalty and engagement driving the company’s expansion to ecommerce and the sale of offline craft activities.

Nortman and Frye announced $2.5 million in Seed funding in April of this year, but have since extended that round to a total of $3.6 million – at a $6.4 million valuation – with the remaining tranche set to close in the coming weeks. The company’s early backers include Upfront Ventures, Greycroft Partners, Daher Capital, and Google Ventures. The additional capital commitments came through the AngelList platform, and included both active VCs and angel investors as well as several first-time startup investors.

Of the extended financing, Nortman says:

We saw the platform as a revolutionary vehicle to support entrepreneurs, a topic near and dear to our hearts.  We wanted to put our money where are out mouth is and show other mom entrepreneurs that there are now vehicles to efficiently connect with investors passionate about a mission, a sector, and a story.  We ended up having a great experience with it, and got commitments for 3X the amount we had asked for in a short time.  In the end, we connected with everyone from new investors, to funds we knew but had not reached out to, to people from my past who I hadn't spoken to in years.

It’s not terribly surprising that Moonfrye has found an eager audience, either on AngelList or among moms and kids. The company is offering a savvy answer to a nearly ubiquitous problem within this demographic: how to turn play time in the digital age into something healthy and productive.

The real question is whether the company can translate this engagement into a money-making business. The manufacturing and delivery of physical goods is a very different business than app development. It’s also one in which neither Nortman nor Frye have any depth of experience. For the company to succeed with its stated business model, the two founders will surely have to hire on this type of operational experience.

Despite Silicon Valley’s widely stated belief that “software is eating the world,” it’s unlikely that the demand for physical experiences will go away anytime soon. Fortunately for Moonfrye, the company entered the market at a time when that need is at its is a great as any time in recent memory, now that the pendulum has swung so far in the digital direction.