Sandhya Jaideep and Jaideep Jain, a hubbie-wife duo, got nervous when their 15-year-old son started learning how to drive. They looked into the market for tools to monitor their son's driving, but didn't find anything for the layperson.

At the time, Jain worked at semiconductor chip technology company Cymer running data products. Jaideep worked at communications startup ChooChee running development. They had backgrounds in predictive analytics and app development respectively. Once they realized there was a hole in the marketplace, they decided to pull a Silicon Valley "Mr. and Mrs. Smith." They quit their jobs and built Truvolo as a hubbie-wife dream team.

Truvolo is a connected car product, one part hardware, one part mobile app. The hardware component is a node that attaches to the diagnostic port located in every car. Didn't know your car had a "diagnostic port" for dispensing data? Me either.

Since 1996, every car made in the U.S. has been mandated by law to have an onboard diagnostics tool, monitoring everything from the fuel system to the O2 sensors. The diagnostic port, frequently located under the driver's wheel, can dispense that data when connected to a scan tool or data logger device. Professional race car drivers or driving enthusiasts frequently have equipment designed to do exactly that. So do car mechanics -- in fact, that's what many car mechanics check first when you bring your car in for maintenance.

Jaideep and Jain developed a device and a phone app for the average driver. No need to be a car expert to understand this information. Truvolo takes the loads of confusing data and interprets it into a beautiful, easy to read app.

The attached node is small, plastic, and could be mistaken for a child's toy, but inside it holds microprocessors that collect information about the speed, RPM, travel route the car took, and other details. 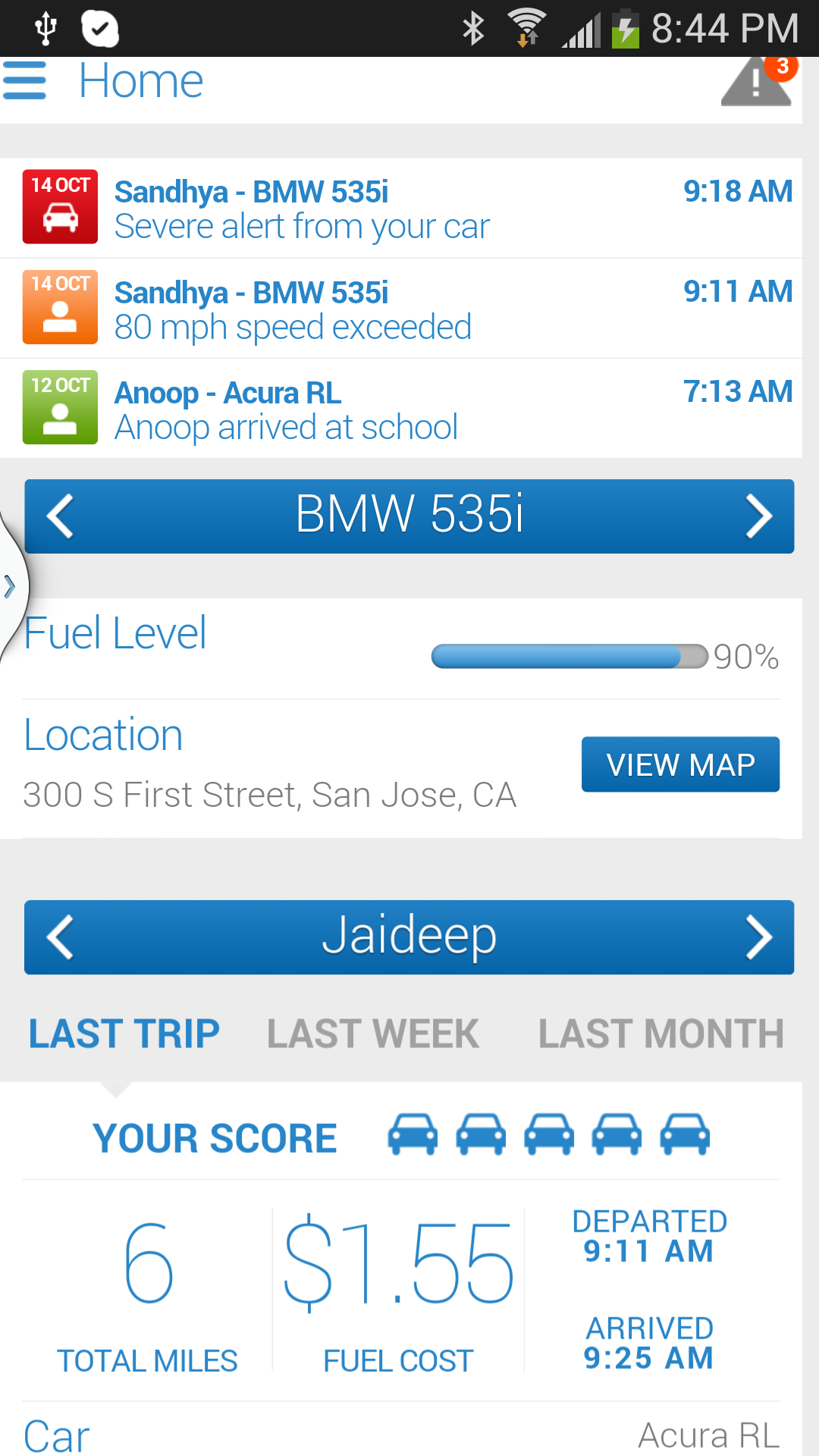 That information is transmitted to the cloud, where it can be accessed by multiple people's smart phones. Through the app, drivers -- or their concerned parents -- can see the route the car took on previous trips, the car's average and peak speeds, and its gas per mile. Furthermore, the app shows real-time information like where the car is currently located. It can be configured to send notifications if the car swerves, goes over a certain speed, or is running low on gas.

The Truvolo connected car device is every helicopter parent's dream tool. Once their precious spawn is behind the wheel, they can monitor everything -- from where the car is located at any given time to how well the person drove on recent trips, with a five star rating system. That would negate their need to text every hour saying, "How are you? Where are you? Please don't keep driving after dark."

The device could also be used for people taking care of senior citizens, keeping tabs on how that person is doing with their driving. 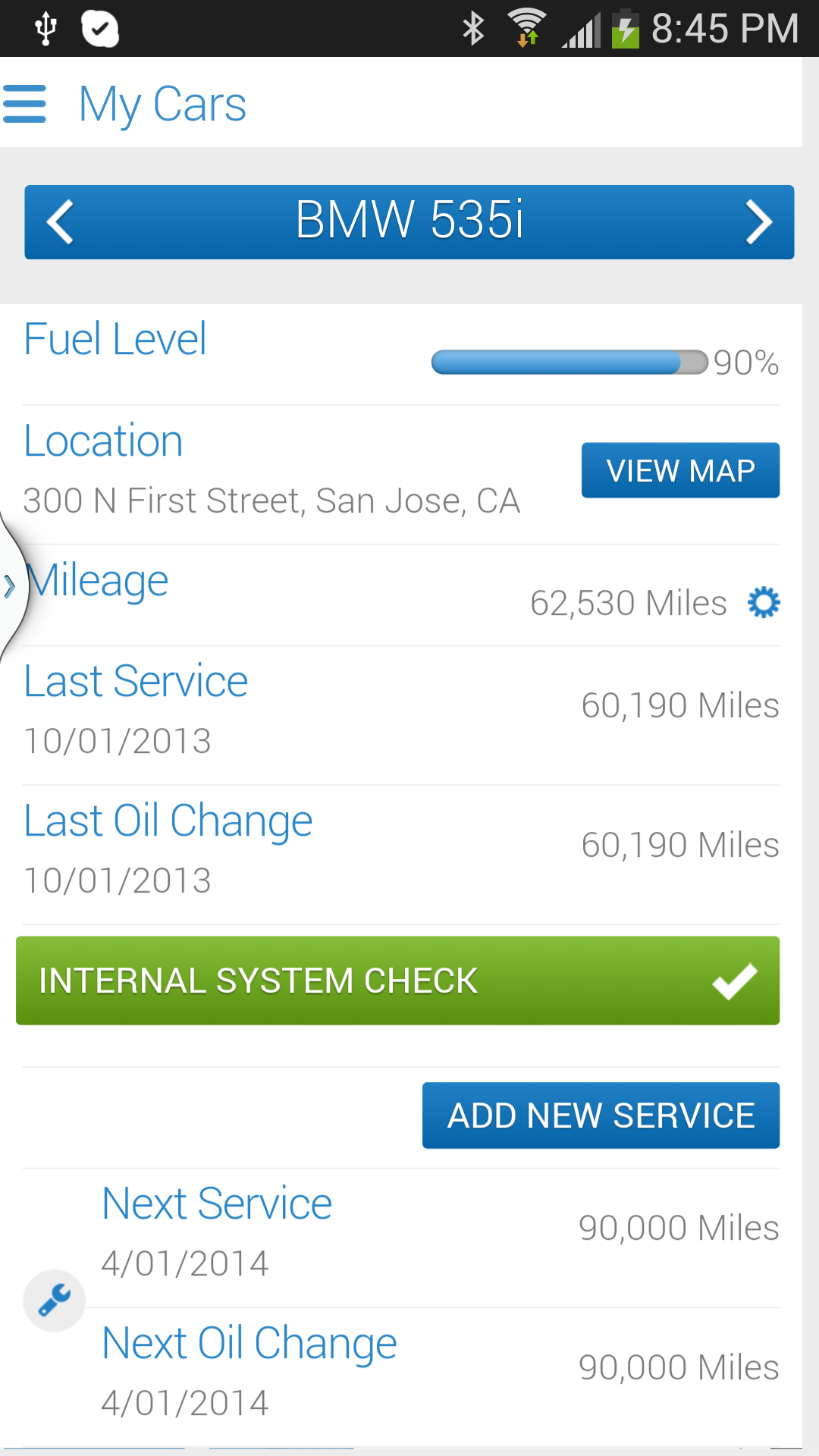 Lastly, Truvolo collects information that regular drivers could want as well, like how many miles per gallon their car is getting. If their car starts to deteriorate, like getting less miles per gallon, the app will alert the driver. The app also calculates when the car needs an oil change based on the car's make, model, and mileage. No more relying on that greasy sticker your mechanic tapes to our dashboard with an estimated date.

It's the right time for a product like Truvolo. The connected home is all the rage, with companies like Nest valued at $800 million after the public fell in love with its smart thermostats. The connected car is the next smart object frontier, although it's still a nascent industry in the earliest stages of consumer awareness.

Although there were no Truvolo-like devices on the market when Jaideep and Jain started developing their product in April, a handful have come to market since. Automatic launched in September to collect driving information from a vehicle and feed it to a mobile app, as did a company called Zubie after it raised $8 million from an equity firm. Fuse is running a Kickstarter for its version now. The race is on to own the connected car market, and Truvolo appears to be last to this particular niche. Jaideep and Jain are still developing the app and won't be running the Kickstarter till January.

It's a hotly contested space, but none of these products have garnered big brand name recognition. If Truvolo truly wants to see widespread adoption, the founders will need to focus largely on consumer education and marketing. That's perhaps where the others have failed till now.

In that regard, Jain and Jaideep appear to be on top of the game. They've already hired a professional PR firm to help them get the word out, despite the fact that they haven't even launched their Kickstarter.

Like other smart product markets, there are unanswered questions about how the connected car industry will develop and what challenges it will face. The sheer amount of data these new devices can collect on cars is worrying from a surveillance point of view. If the government ever decided to go Big Brother -- a step the NSA is clearly comfortable taking -- connected car devices have a wealth of information about where individuals go and how they drive. With an app like Truvolo, that information is sent to the cloud so if the company wanted to someday sell it to advertisers for targeting they could do so. Jaideep and Jain of course say that is not part of the plan and the information is owned by consumers.

No matter what, with the advent of devices like Truvolo it's clear there's one swath of society that will face surveillance and a severe curtailing of the freedoms afforded to them by driving: teens. No more telling your parents you're sleeping over at Sally's when really you're going to a party at Tom's. Skipping school for a trip to the mall is also out of the question.