Ryan Friedman came up with the idea for his Popcorn messaging app, which lets users anonymously group chat with anyone in a one mile radius, when he was attending an Avenged Sevenfold concert. He was worried he wouldn't get a ticket when faced with the monster line, and he wished he had an app to chat with the people around him to find someone selling extras.

Friedman had built three other apps in the past that never really took off. He was living off a nest egg from a post-college job, experimenting to find the right product for the right market. After the Avenged Sevenfold concert, he built Popcorn messaging in the span of 24 hours and posted it on Hacker News. To his surprise, it got up-voted to the top, and Popcorn garnered 1,000 users in the first day. Forbes reached out to do a story, as did one of Japan's biggest blogs Gigazine. Before he knew it, Friedman was seeing 10x growth in user acquisition week over week with the Popcorn app.

He posted the Forbes story on the Avenge Sevenfold fan forum, telling the band he came up with the app idea at one of their concerts. The next day he got a call from their manager who told him the band was interested in partnering with him. "Then I got an email from Matt Sanders, the lead singer, and he was like, 'This would be cool for us to interact with our fans and do special giveaways,'" Friedman says. Soon after that, a friend of Friedman's put him in touch with someone from Scooter Braun Projects -- the company that manages Justin Bieber. "He said, 'If you want to pour some gas on the flame, contact me in a few months,'" Friedman says.

This is the dawn of the messaging app era. Everyone from Avenged Sevenfold to Justin Bieber wants to get in on the consumer interest or potential profits. With the likes of Snapchat rejecting $3 billion and $4 billion offers from Facebook and Google respectively, and companies like WeChat and KakaoTalk bringing in millions of users and starting to monetize them, investors and entrepreneurs (and journalists) alike are looking to messaging's future. Texting and chatting applications are taking over everything, from teen circles to the enterprise space.

Popcorn is riding the coattails of that wave, and it begs a good question. How much messaging is too much? Consumers have already shown that they're willing to use multiple applications in parallel, like Snapchat for sending silly or emotional visual information and WhatsApp for reliable, free texting, and their regular Apple/Android texting for everything else. But is there room in the messaging market for more verticals and segmentation?

Popcorn messaging lets users chat with anyone anonymously in a one-mile radius. The idea is that the geolocation context makes the chatting more meaningful. If you're waiting in line for a concert you could find someone nearby looking to sell an extra ticket. If you're at a sporting event, everyone can commiserate or celebrate over the points scored or lost via the app. If you're in a giant lecture hall at a big university and miss something the professor said you can ask nearby students to fill you in via chat. If you hear strange noises at night near your apartment that sound suspiciously like gunfire you can see whether anyone else heard them too. The use cases are unlimited.

In fact, after Popcorn messaging was pitched to me as a story I was in a dance bar that was unbearably hot and wished I had already downloaded the app so I could see if anyone else felt the same. 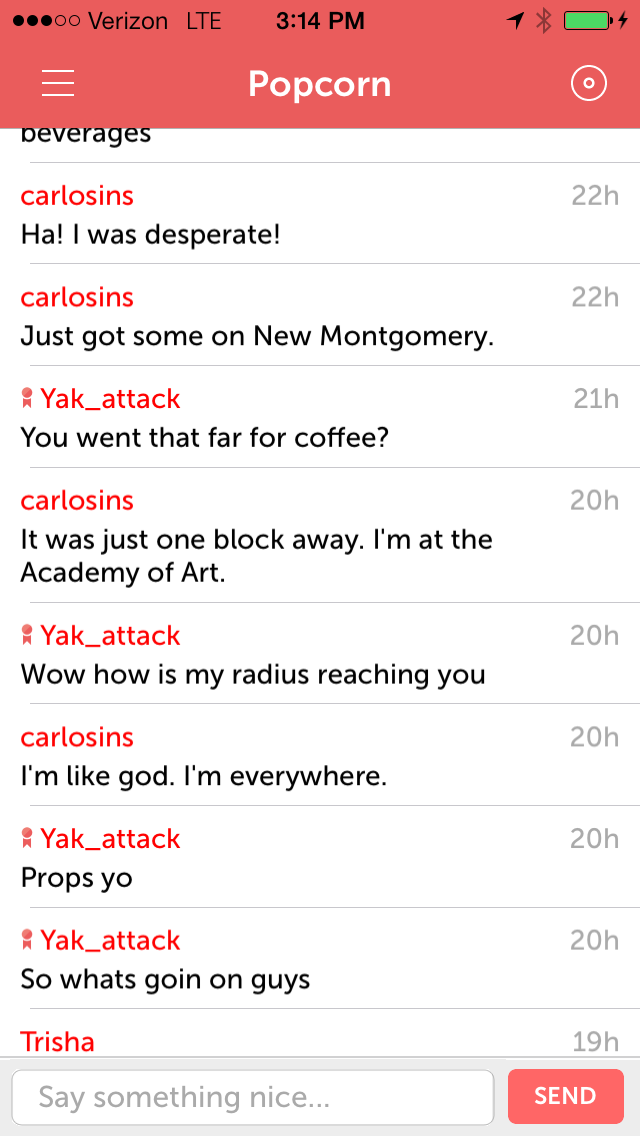 Anonymous group chatting based on location is intriguing. But the barriers to making Popcorn successful are huge. In order for the app to be helpful, the network needs to be dense. There has to be many many people on the app. After all, it's not much use if you can only talk to one or two people on it and they're a mile away from you. The intriguing use cases are tied to tighter radiuses -- smaller locations like bars, lecture halls, sporting venues. Places that are smaller than a mile wide. At the moment the Popcorn conversations are dull as dirt (see left).

Furthermore, the app is easy to copy. Friedman himself admits it only took a day to build. Popcorn doesn't have enough brand potency or a big enough network to keep users from turning to other similar apps. A few similar competitors already exist. Chatimity lets users talk anonymously in themed chat rooms not tied to location. BuzzMob focuses on event based message boards. Mixer lets people chat based on location but not anonymously -- it's tied to their social media profiles.

As the messaging space gets hotter, we'll see more and more of these niche messaging applications. But just like the public eventually got burned out on photo sharing apps, I suspect messaging will reach the same fate, sooner rather than later.