The unbroken path of your life, as seen by your smartphone

Lifelogging is one trend I had not been able to wrap my head around. I didn't know how companies like Saga or Rove survived, collecting endless data about where you're going and what you're doing every moment of every day. How did a camera like Memoto raise half a million through crowdfunding? Did people really want endless photos of every mundane moment of their lives taken automatically?

After all, lifelogging wasn't quite like the Fitbits or Ups of the quantified self movement, with the goal of fitness. It wasn't the same as Facebook, where you share updates to present a social version of your self and use it to connect with other people. Lifelogging had seemingly no purpose besides pure narcissism. And that's pure narcissism about boring facts, like how many times you went to Walgreens in the last week.

But then I met Siqi Chen, the co-founder of the new company Heyday, and in about five minutes he had converted me into a lifelogging fan. "Remembering the story of your life is a foundational human need," Chen says to me. I roll my eyes. I'm pretty sure if you check Maslow's Hierarchy of Needs lifelogging is nowhere on it. 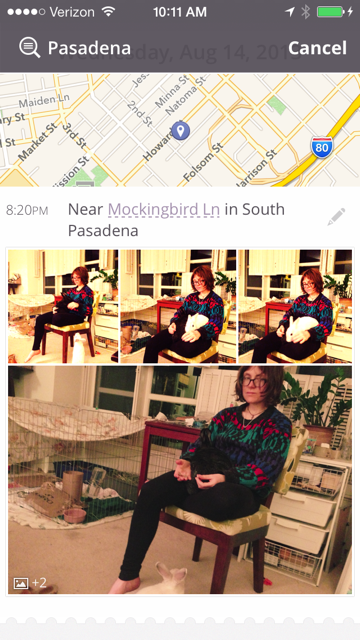 Chen pulls out the smartphone app he and his team have spent the last year building and A/B testing in New Zealand. It turns the actions of your phone into a beautiful collage by using the photos taken, GPS information, and dates and times to build a scrapbook of your life. No effort required.

Scrapbooks are boring, but Heyday isn't. It's actually functional.

You can go back in time to see what you were doing a year ago, taking you on a surprising trip down memory lane. If you fly somewhere for a visit, the app senses that and will pull up the details, photos, and dates of the last time you visited such-and-such place, laid out cleanly. It uses Google Maps API to say when you were near a key location, so there's no need to remember what awesome bar or cafe you hung out in. Heyday remembers for you, and it sends you notifications when it thinks you might want to stroll down memory lane.

It also lets you tag people in photos, so you can access an entire timeline of your friendship with someone, tracking all the dates and places you spent and went together through photos.

Essentially it's like a real time scrapbooking tool. Instead of albums stuffed in shoe boxes under your bed that never see the light of day, you can reminisce when you'd want to reminisce. Like landing in NYC for the first time in five years or sitting at your favorite bar with a friend talking about the crazy nights you spent there in college. The pictures, dates, and places are right at your fingertips.

Heyday back-scrapbooks all your activity, so even if you're just downloading the app now it will have all the information since you started taking pictures with your phone. 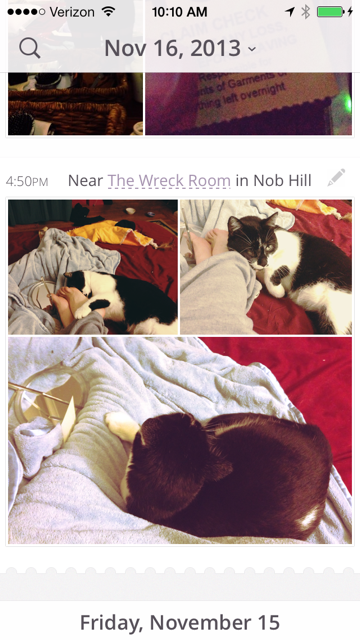 As I feared, nearly all my recent Heyday collages are of my cat Merv. The app tracks my descent into crazy cat ladydom, starting with the early dates of me sans Merv, where I take pictures of normal things like food and friends. But once Merv appears on the image horizon it's all cat all the time from then on.

Heyday sits squarely between two types of applications already on the market. The Memoirs and Viewfinders of the world, which organize images, and the Sagas and Roves that give you data graphs of where you went without the emotional component. Since it only organizes the pictures you take on the phone, you aren't overwhelmed with images Memoto style. It only captures the important things -- that you deem important by virtue of taking a picture -- and then makes them easy to access.

The co-founders Siqi Chen and Alex Le have the right pedigree to pull this off. They created the popular Facebook game Friends for Sale as part of their company Serious Business, which they promptly sold to Zynga. Chen then worked as a General Manager at Zynga for two years and Le ran Cityville.

He's also got an impressive roster of investors backing Heyday, who have already poured $2 million dollars into the project. Eric Ries, Keith Rabois, and Google Ventures are all on that list.

The experience of working in gaming inspired him to strike out to something new. "Anything that's content, TV shows, games, have a shelf life," Chen says. "I was working at Zynga 70 hours a week building something and the minute you ship it it starts dying. It's sad to work on something and not have it be around forever."

That experience motivates Chen's philosophy about Heyday. At this point he doesn't care about user acquisition. He cares about user engagement and retention.

Of course, app immortality requires revenue, and Heyday doesn't seem like easy money pickings. Ads would be totally out of place in the very personal, intimate app of your life. Chen plans to monetize down the line through a freemium model, allowing people to buy additional features. But I can't imagine what possible lifelogging features could generate enough money to bring in venture-worthy returns.

Until Heyday's financial reckoning day though, Merv and I will use it to happily reminisce about our hundreds of photo-worthy cuddle sessions.