Spotify is now free on mobile. So why bother subscribing?

At the moment, 20 percent of Spotify's users subscribe to Spotify's premium service. That's around six million people paying $10 a month, or $120 a year, for music, and represents the vast majority of Spotify's income.

For users, the main benefit of paying to subscribe to Spotify is streaming music on your mobile device. Free users were previously limited to desktop-only streaming.

But today, Spotify dropped that requirement. Free users can now stream Spotify's entire catalog on tablets. Mobile users can stream their playlists on shuffle. (That shuffle distinction is a clever way for Spotify to get around paying high "on-demand" royalty fees.)

So with the biggest draw of a Spotify premium account gone, what's the point of subscribing?

Spotify CEO Daniel Ek made the argument for his premium service today in a news conference at Spotify's New York office. The premium subscribers will have the ability to download songs and listen to them offline. And only subscribers will have on-demand listening for mobile. And of course, subscribers won't be inundated with ads every three or four songs. There's no sound more cringe-inducing to me than the opening line of Spotify's relentless house ads. "Hey Spotify user!" For that reason, I'll keep my premium account.

Ek hinted that Spotify would somehow discourage one-song playlists that attempt to get around the shuffle requirement but didn't elaborate as to how. The vast majority of playlists on Spotify have more than 20 songs, he said. Beyond that, more than half of the 4.5 billion listening hours on Spotify in the last year have been on songs already saved in a user's catalog.

The ultimate goal is still to convert free users into paid users. Getting them to try out the service is the only way to start them down that funnel. As more households trade desktop computers for tablets, Spotify has decided it needs to be available to new users on the device they're most likely to want to use it.

Once they're hooked, they're liable to subscribe. Ek noted that the more hours users log on Spotify, the more likely they are to convert into subscribers. "This will be the way people build their music catalogs," he said. "It won't be purchasing one song and then another song."

Spotify made $576.5 million in revenue last year and lost $77 million. The vast majority of that comes from subscribers: Back of the envelope calculations show subscriptions make up the vast majority of it -- six million subscribers at $120 per year means $720 million in revenue. (That's $120 a year -- almost double the $68 a year that the average consumer spent on music at the peak of the CD boom.) Advertising to the free users is still meaningful to Spotify, though, since it is how the service monetizers 80 percent of its users. 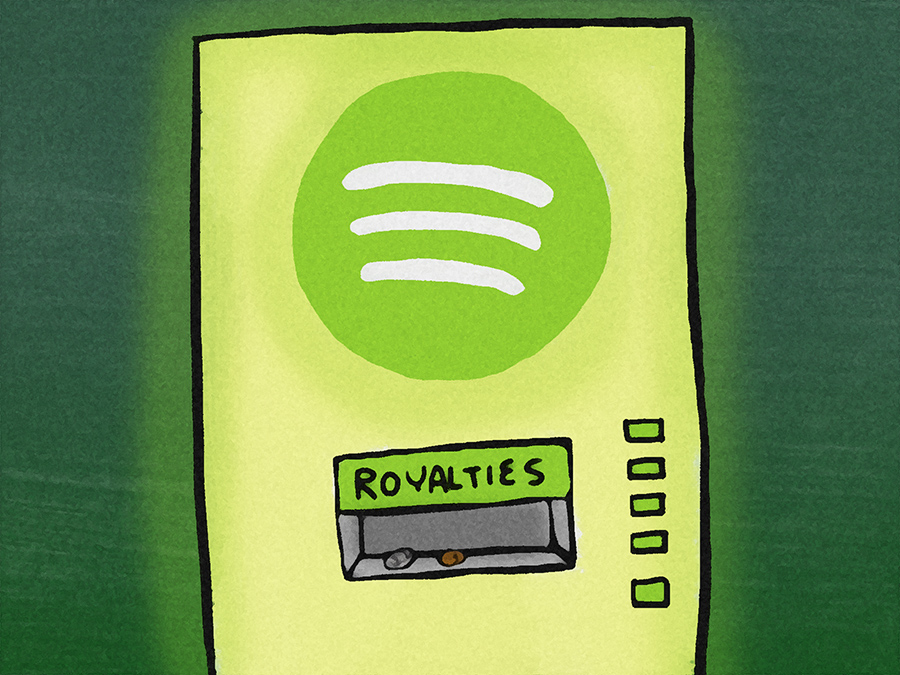 As for that pesky accusation that Spotify is hurting the music industry, Ek pointed out that Spotify has paid out more than $1 billion to artists in the last year, representing 70 percent of its income. The company recently laid out exactly how it pays artists in a detailed report.

"For the first time, there's really a feeling that the music industry is stabilizing right now," Ek said. "We're going to continue to work alongside every artist to make that future a reality."

Speaking of working alongside artists, one of history's most famous rock acts, Led Zeppelin, is now available to stream exclusively on Spotify. We can stop listening to those horrible "Lets Zep" and other tribute bands that come up in searches. Last year, Spotify celebrated a similar coup with the addition of Metallica, the band that famously sued Napster over the piracy of its music. Next stop, the Beatles!