Sometimes better executions of a previously good idea are all it takes to make something take off. See: Apple rip off of Microsoft tablet, Facebook rip off of MySpace (and MySpace ripoff of Friendster). But sometimes, said executions are destined to wind up in people's digital garbage.

News reader app Prismatic seems to be that case. In theory it's something useful: a place to consume tailored content based on your interests, connected to other people. But wait, that sounds familiar…isn't that also the premise of Pinterest, Twitter, Tumblr, and loads of news readers?

But Prismatic CEO Bradford Cross says that these platforms box us into certain categories and keep us from exploring or interacting with all our interests in a social manner. "I don't blast things about architecture on Twitter, because people unfollow me," Cross says.

Prismatic theoretically solves that problem as of today, with an update to the app that turns it into a social, mobile content consuming machine.

Previously, Prismatic users signed up for categories of their interests and then got a feed of content. There was a back end system analyzing incoming links, creating new interest categories, and showing people posts more relevant to them. 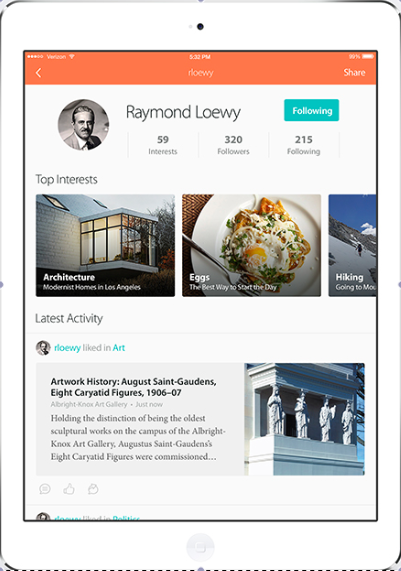 Now, in addition to all that, users can follow other people, and post their own stories. It's like if Twitter, Pinterest, and Pulse all had a baby. People can share any link, trusting it will only clutter up the feeds of the people who want to see it, making the space a haven for hobbyists, professionals, and news consumers alike. "We're building a home for all your interests," Cross says. Theoretically.

While interviewing Cross a few weeks ago, at the time I thought -- hey, I might use this app. After all, I like content. I have hobbies. I don't tweet gender stories on Twitter for fear of losing followers, and I avoid posting tech stories on Facebook for pissing off my friends. A home for all of the above sounds nice.

But weeks later I had to wrack my brain to remember what, exactly, Prismatic does. I hadn't opened the app since talking to Cross. And I should be the company's ideal target audience -- a journalist who is constantly consuming content.

At the end of the day, I've got lists on Twitter for real-time discussion of different topics, and my Facebook feed surfaces things the professional world isn't talking about. I've got a Pinterest board just for collecting pretty fashion pictures. And I use Feedly to make sure I'm not missing major tech news. That's enough. An app that mish-mashes them all into one place is not much use.