[This is a breaking news post, which we will be updating as more information comes in.]

Tensions between Bay Area activists and tech institutions ratcheted up this morning when protestors attacked a Google bus in West Oakland, smashing the bus's rear window while Google employees were inside. Local news organization KQED reports that Google has confirmed the attack.

One Google employee took to Twitter to post evidence of the encounter. A picture shows protestors standing in front of the bus holding a sign that says, "Fuck Off Google."

My Gbus got hit by protesters in Oakland and they broke a window. pic.twitter.com/VGCyhBLgyd 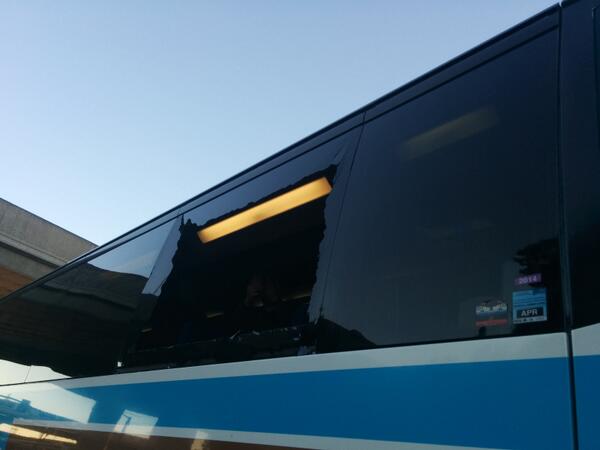 Protestors published a colorful account of the incident on local forum IndyBay.org: "[A] person appeared from behind the bus and quickly smashed the whole of the rear window, making glass rain down on the street. Cold air blew inside the bus and the blockaders with their banners departed. The kind young man left the bus and outside someone threw fliers with a smiley face logo and the message ‘disrupt google’ into the air."

Two blockades of tech company buses were planned this morning, one in San Francisco and the other in West Oakland. The San Francisco group was organized by a loose coalition of housing activists, including representatives from Eviction Free SF, Our Mission No Eviction, and Just Cause. For the SF protest, roughly 100 people showed up and blocked an Apple bus for 30 minutes.

The spokesperson for the San Francisco group, Fred Sherburn-Zimmer, claims the two protests were not connected. "I have no idea who is organizing the West Oakland protest," she says. "We just heard a rumor it was happening a few days ago and thought it was perfect timing since the same pressures are happening on both sides of the bay."

Based on the activists' account themselves, it appears the rowdier West Oakland protest was a smaller group. The IndyBay.org account said:

At 8:15, a small group of people met at 7th and Adeline in West Oakland. Down the street, over 20 employees of Google were queued up, waiting for their giant white bus to take them to their Mountain View headquarters. When it arrived, a kind young man, homeless and unemployed, boarded the bus with the employees. While they took their seats, several people unfurled two giant banners reading “TECHIES: Your World Is Not Welcome Here” and “FUCK OFF GOOGLE."

The San Francisco group declined to condemn the actions of the more aggressive West Oakland activist group. "Rents are going through the roof in both cities, we're seeing massive levels of eviction," Sherburn-Zimmer says. "It's understandable that people are angry on both sides of the bay."

Erin Mcelroy, another member of the SF activist coalition, was surprised to hear about the West Oakland's protest approach. "I just found out about it now," she says. "I had no idea that they had done that."

She called it a different level of civil disobedience, and explained that it makes sense given that rising rents in SF lead to the same thing happening in Oakland as people move there. "I'm excited that different groups are forming and mobilizing in different ways," Mcelroy says. "Obviously our approach is different to their's but it's important to link gentrification in the East Bay to gentrification in SF."

Today's blockades come at a time of increasing tension between some San Francisco residents and larger Silicon Valley organizations.

As the tech industry is growing in size, wealth, and power, it attracts more people to the SF Bay Area and decreases the amount of available housing. Some San Francisco and East Bay residents are getting pushed out of the cities they live in because they can no longer afford rent. Likewise, some landlords are taking advantage of a law called the Ellis Act to force long time residents out and sell the property for high rates.

Many employees who work for Google, Apple, Facebook, LinkedIn, and other tech companies based on the Peninsula live in San Francisco or the East Bay. They take shuttles run by the corporations from these locations down to work in Menlo Park, Palo Alto, and Mountain View.

As a result, the private shuttles have become a symbol of the socioeconomic conflict unfolding in the Bay Area. Protestors have blockaded tech company buses on previous instances before today, most notably a few weeks ago when a fake video went viral online. The clip showed a supposed Google employee shouting back at protestors, “You can’t afford it? You can leave." The man turned out to be a union organizer performing a bit of activist theater.

The smashing of the Google bus window today marks the first time the anti-eviction movement has used physically aggressive tactics, although in May between 30 and 40 protesters in San Francisco's Mission district attacked a piñata in the form of a Google bus.

"The scent of sage was strong, but the revolution was falling short," noted blogger Kevin Montgomery, who witnessed the attack on the defenseless paper mache.

Now, it seems, at least one of the protest groups has graduated to vandalism.