Uber is in full-fledged prep mode to make sure everyone and their grandmothers knows there will be surge pricing on New Years Eve. They've even launched a mini education campaign, complete with data visualization charts and videos. 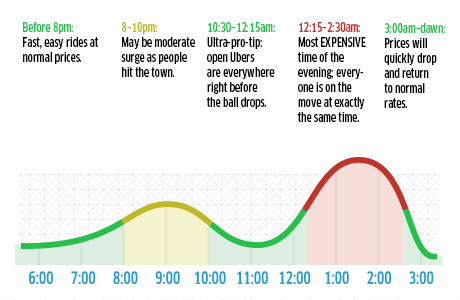 The Uber blog post has a handy graph to show consumers how much surge pricing to expect at different times of the night. In an accompanying clip, CEO Travis Kalanick stares steadily into the camera and hits his palm with a clenched fist to drive home his point.

"At about midnight, the ball drops, people kiss their special someone, they pop some champagne, and right after that people want to get out of dodge," Kalanick says. "And it's at 12:15 am, in cities around the world, when the demand just way outstrips anything that supply can bring to the table." He shakes his head ruefully.

Consumers aren't the only ones Uber is trying to prepare -- the company has also been educating drivers about all the money they can make if they forsake New Year's fun and get on the road instead. I was surprised to find an ad targeted to Uber drivers in my Facebook feed yesterday. 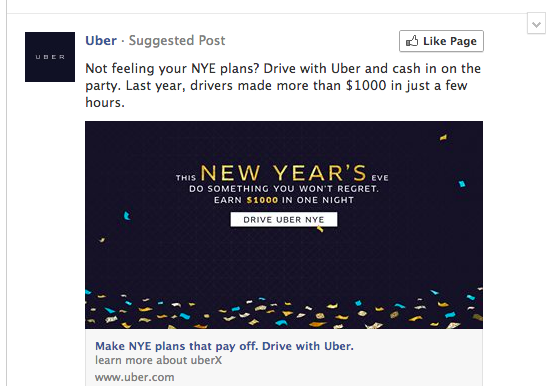 I am not a registered Uber driver. It's not totally clear why Uber chose to communicate with its drivers via a mass Facebook promotion seen by non-drivers. Given the ad popped up two days before New Year's, it wouldn't provide much turnaround time for vetting and hiring drivers for the festive night.

I asked Uber spokesperson Andrew Noyes whether the company was onboarding new drivers for New Years through such ad tactics. "No," Noyes responded over email, "but we've communicated with partner drivers extensively ahead of NYE to encourage them to drive." [Update: After this post published Noyes emailed me to correct his earlier statement. He said, "We are on-boarding qualified new drivers for New Years as well."]

Perhaps the Facebook advertisement, although seemingly targeted at Uber drivers, is an attempt to recruit future drivers for after New Year's. A not-so-subtle way of saying, "Hey look, you can make a ton of money driving for us."

Uber is trying to stave off the PR shitstorm it suffered New Year's Eve two years ago. It was not a happy time for Uber. It marked the second time the company used surge pricing -- Halloween 2011 being the first.

Although Uber posted a blog to warn people in advance, customers were still pissed to see rates increase. Uber hadn't perfected its in-app messaging system yet, so some customers accepted rides for two or three times the normal rate without realizing.

An Uber engineer even admitted in a Quora post afterwards that at some points the surge pricing was not lowering demand. On those occasions, the company manually overrode the system to keep rates low and stem unhappy consumer reactions.

Now, two years later, surge pricing has become a normal part of the Uber way, with passengers coming to expect increased rates any time, even at 5 pm on a Tuesday. However, people still haven't adjusted to how high surge pricing can go.

When a snow flurry hit New York City a few weeks ago users were disgusted  that Uber pricing increased as much as seven times the regular rate. Uber fought the backlash with everything from snarky tweets from CEO Travis Kalanick to a defensive interview with Wired.

In such communication efforts, Uber seems convinced people hate surge pricing because they simply don't understand it. Kalanick and his supporters repeat again and again: It's just supply and demand, market dynamics, an algorithm that Uber invented yet has no control over.

But as Pando explored, the problem is not that customers don't understand surge pricing -- it's that they don't necessarily trust Uber's motives. People don't believe that the seven-times rate exists simply to even out supply and demand. Users wonder whether, when Uber takes a twenty percent cut of surge pricing, the scheme is simply a way to make the company more money.

Regardless, Kalanick shows no sign of backing down from surge pricing. Anyone not looking to get gouged tonight should stick to using Uber the hours he recommends.

Or perhaps, don't rely on Uber at all. Rumor has it this old fashioned service called a "taxi" doesn't raise its rates just because it's New Year's Eve...how refreshing and innovative.