From coding to the catwalk: This high fashion model has a secret double life

Like Superman's Clark Kent and Spiderman's Peter Parker, 29-year-old Lyndsey Scott has an alter ego. By day, she's a high fashion model, walking the runway for the likes of Gucci, Prada, Calvin Klein, and Victoria's Secret. By night, she dons square-framed Burberry glasses and transforms into probably the world's most beautiful computer programmer.

At least, she used to don glasses. "They're really broken right now...I fell asleep in them one too many times," Scott says. "I had been putting tape in the middle, but that hasn't been working so well."

While Skyping with Scott, I found it hard to imagine her hunched over a computer screen filled with code lines, rocking Urkel-style glasses with tape down the middle. But that's what makes her so intriguing: she confounds the stereotypes of both models and programmers.

During her early days modeling, her parents would not-so-subtly nudge her back to her comp-sci roots. "For the first two years after college, my parents would slip fliers under my door for various jobs that maybe they had heard about in computer science," Scott says.

But she resisted the pressure, and in early 2009 she got her big break with Calvin Klein. She was the first ever African American to get an exclusive contract with the company for New York Fashion Week.

After that, Scott's modeling career blew up. She walked for Prada, Gucci, Louis Vuitton, Vera Wang, and Fendi in Fashion Weeks all over the world. The cherry on top was being picked to walk in the famous Victoria's Secret show.

She's the eldest of four children, and her youngest brother Matthew Scott says she's the pioneer of the family. "If I had to liken her to someone, I'd say she's like Gisele Bundchen mixed in with Bill Gates," Matthew Scott says. "I can't imagine those two combined but if they did it would probably be Lyndsey."

All throughout her modeling career, Scott has continued to program on the side. Few in the industry know that Scott taught herself Python, Objective C, and iOS, and built 7 or 8 apps, two of which have made it into the Apple store. She says she's the only coder-model she's ever met, and does not make a habit of telling people about her side hobby.

"I built that app because it was something I personally needed," Scott says. "My book always ends up looking terrible, the books fall apart, the pages are tearing, it's dirty, and it's a mess." Scott has started to market the app to agencies and other models, but she has no plans to exchange her modeling career for app selling.

Lastly, she's working on a third mystery app but wouldn't give any details. She hinted it will help people develop romantic, friendship, and professional connections.

Over Skype, Scott explains why she's been hesitant to talk about her compsci college degree with people in the modeling industry:

She's active on the website Stack Overflow and frequently reads startup darling Quora. Recently she wrote her first ever response to a Quora question: What does it feel like to go from physically unattractive to physically attractive?

"I was up programming late at night and I was drunk on code," Scott says. "It came up in my inbox and I decided to answer it." She included pictures of herself as a nerdy child rocking purple glasses and a hair scrunchie, and then a shot of her walking in the Victoria's Secret Fashion Show. 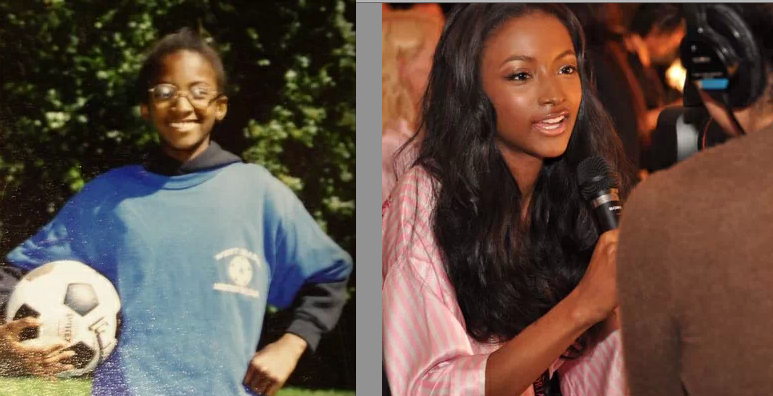 [I]t's been a rather jarring experience having people see and treat me the way they suddenly do now. I was bullied and often friendless throughout puberty because people automatically judged me...The difference between then and now though is that back then, they wouldn't give me the chance to show them that I was kinda cool, and now they readily give me a chance...and are then often disappointed that I'm kind of a nerd. ;)

Lyndsey's articulately crafted answer got 3,576 up votes and went viral, garnering her coverage from Slate. Funny enough, Scott says she still faces bullying of a sort, although this time it's professional. "I've definitely had a few [modeling] agencies tell me I need to be cooler," Scott says. "Of course these conversations make you feel pretty bad about yourself."

In her Quora answer, Lyndsey barely talked about her programming background, only briefly mentioning it. "It truly is my secret double life," Scott says. "It's not a nice way to live."

Scott is now slowly, warily, becoming more public about her compsci degree. She has a new agent -- Tony Vavroch of Elite Model Management -- who supports her nerdy side, and he's given her free reign to talk about it.

"Anything which adds dimension to a model beyond her physical beauty is a good thing," Vavroch says. "Physical beauty gets a model’s foot in the door but her personality, combined with other gifts and abilities, makes her more interesting  to advertisers and fashion and beauty clients."

Scott agrees. "It's about the emphasis of the person as a brand. I prefer to have an honest brand."