Markerly pivots to platform to match up bloggers with brands, adds $600K in seed funding

Ware and the Markerly team

When Markerly graduated from 500 Startups in 2012, it was a content sharing platform. The company's goal was to help publishers grow web traffic form social media. But if Upworthy, ViralNova and its peers have taught us anything, it's that publishers can do this just fine on their own, provided they write the right kinds of headlines.

Bloggers were interested in the product -- many signed up. The problem was Markerly was a "nice to have," not a "need to have." What bloggers needed was new ways to make money.

So after a few months in the market fundraising, Markerly decided to go back to the drawing board. Six months ago, the company landed on a version of its platform which publishers actually need: Markerly became an "influencer platform" comparable to RewardStyle, Traackr and others.

The change, co-founder Sarah Ware says, "has been working out beautifully for us." Markerly promptly raised $600,000 in seed funding from Valley angel investor Massy Mehdipour (the company has raised an additional $200,000 from angels and 500 Startups).

The company was able to round up 20,000 bloggers from a variety of categories, including mom bloggers, sports bloggers, and outdoor lifestyle bloggers. Currently, Markerly is running 15 campaigns per month with brands like Levi's, Lyft, eMails and Skillshare. One Levi's campaign, which used 40 influencers, generated 164,000 reads and 84 million article recommendations, Ware says.

The Markerly platform matches bloggers with brands who want to reach their audience. The difference between Markerly and other influencer platforms is that Markerly charges on a "price per read" and is not limited to the apparel, beauty and accessories categories. Likewise, the company prides itself on the fact that it has code on all of its bloggers' sites and can deliver data such as CTR, traffic, cost-per-read, as well as demographic information of readers, cookies for retargeting and predictive analytics such as how likely a reader of a certain blog is to buy a product they read about. 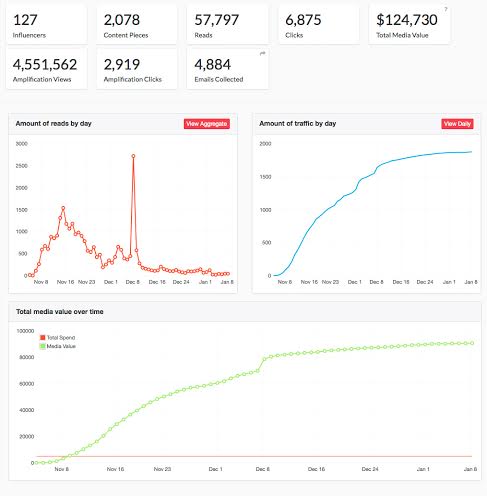 Bloggers have steadily gained in influence over the past few years, and brands are recognizing their power to drive sales. RewardStyle's network of fashion bloggers drove $150 million in sales last year.

Campaigns on Markerly are charged by "price per read," which focuses on delivering an engaged audience, versus a flat fee on a story that perhaps no one reads. Campaigns start at $10,000 and go up from there, and Markerly takes a cut of each campaign.

Part of the challenge with influencer marketing is that it's a service business, not unlike a slightly more efficient advertising agency. Startups like Markerly must have a human managing each campaign. However, the company has built some efficiencies to help automate as much of the business as possible, such as identifying the right bloggers for a campaign, verifying that a sponsored post is up with all the right links in place, pay bloggers and A/B test ads for retargeting a sponsored post on Facebook and display ads around the Web.