When you put the words Uber and micro-entrepreneurship in the same sentence, you might naturally think about drivers building their own livery businesses. But it turns out that may not be the only way to make money on the platform. A few LA entrepreneurs, all of which have asked to remain anonymous, found another more lighthearted approach to monetizing Uber.

Around the new year, Uber and several other prominent technology companies offered souped up referral bonuses for existing users who introduced new users to their services. In Uber’s case it was a $20 credit, double the standard $10 offer. All new users receive the same $20 credit toward their first ride.

Intrigued by the prospect of filling his Uber bank, Steve (not his real name) decided to test the waters by paying for a Facebook promoted posts (ad), hoping to encourage his network to sign up for Uber using his affiliate link.

The ad read “Use my Uber promo code, xxxxx, and get $20 off your first Uber ride.” The cost of this one-time experiment was just $21. The result was four referral commissions for a total return of $80.

When Steve posted to Facebook celebrating his success, it turned out he wasn’t the only LA entrepreneur leveraging referral offers. Another local lifehacker, let’s call him John, recognized the same opportunity. Rather than using paid marketing channels, however, he took a more old school approach.

John's circle of close friends are mostly fellow-entrepreneurs, the vast majority of which have already used Uber before. Unfortunately, the referral credit is only good for first time users. Because an Uber account is tied to a user's mobile phone number, it’s not like his friends could simply open a new account with a different email address.

So John decided that the best way evangelize the service to new users outside his network would be through fliers. Shortly after New Years Eve, he began distributing a few every time he went to a bar or walked past a bus stop near his home. 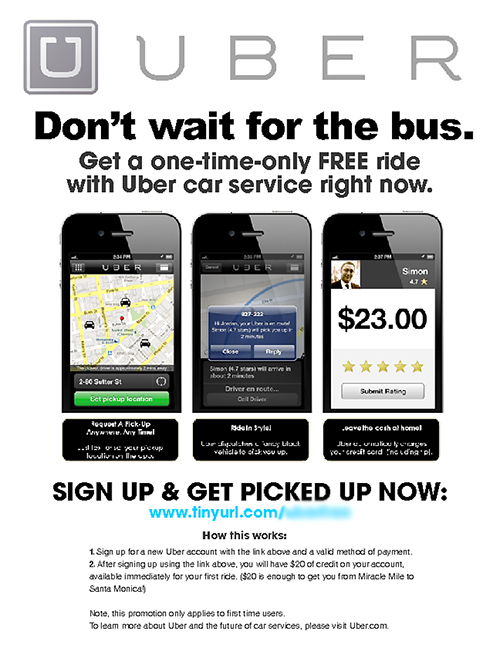 “I thought that the most effective thing would be to get this in front of people at the time of decision, you know, when they needed a ride,” he says. “I tried to make the flyers look official, because people are generally skeptical of flyers.”

With limited effort, John recruited six new users who took their first ride prior to the January 21 promotion deadline. That’s $120 in free Uber credits. Emboldened by this success, John wondered how effective this would be on other platforms.

Turns out peer-to-peer and mobile payments platform Venmo was having its own New Year referral promotion in which users would receive $5 for introducing new user to the platform. So John, going digital this time, sent out 1,700 emails inviting his contacts to join Venmo.

In a little over a week, 40 of his friends joined and 20 have sent in their first payments. Ka-ching, $100 more for John. This isn’t big money, of course, but between John and Steve, they collected nearly $300 and with almost no overhead. Steve spent a few dollars for his Facebook add and John paid a few pennies to print fliers. Both spent less than an hour on this.

The startups win too because they get their products in front of new users, which, of course, was the objective all along. Uber and Venmo obviously determined that their lifetime value of a customer is greater than the $20 (plus $20 for the new user) and $5 they spent respectively to acquire them. Rumor has it that Tinder has been a popular platform for referral promotion hackers and Lyft just announced its own "give $25, receive $25 promotion today." Back in the day, PayPal managed to grow exponentially on the back of eBay when eBay sellers, in essence, began selling PayPal to their customers (receiving $10 for every new PayPal user who signed up).

The real question is, how much is an hour of time worth to John and Steve?