Tristan Walker: Why combining technology with black culture is "the greatest economic opportunity of our lifetime"

I almost hate to ask Tristan Walker about life as an African American entrepreneur in Silicon Valley. He must get asked this by every waking reporter, venture capitalist, childhood friend, new hire, or even general well-wisher.

Most female entrepreneurs I know, for instance, loathe questions about their gender. It feels as if all of their accomplishments and uniquenesses are boiled down to the single issue that's somehow meant to define them. To many, the very question feels more sexist. And successful African American founders who've raised money from the most elite of Valley venture firms are even more rare than women founders.

But astoundingly Walker is not sick of talking about it. He welcomes it. He actually smiles when I ask.

He has a nonprofit called Code2040 that aims flood the tech world with African American and Latino coding talent by the year 2040-- when demographers say America will officially become "majority minority." And earlier this month he launched his much anticipated and well-funded new startup Walker & Co., which aims to be a modern, hip Procter & Gamble for people of color.

To Walker, bridging this gap between the haves in the Valley and minorities of the world as more than just doing social good. It's key to the future of the Valley as well.

Simply put: If the world isn't mostly white, global digital media and ecommerce can't only be designed by and for white people. "Most culture in this country is driven by Black culture, whether that's food, music, dance, or anything else," he says. "And more recently Latino and Asian culture have driven global culture. Here I live in the most early adopting region in the world, and we know very little about the most early adopting culture. Therein lies the opportunity."

For more than the last year, Walker has agonized about what his new startup would be once he landed a plum gig as entrepreneur in residence at Andreessen Horowitz. [Disclosure: Partners Marc Andreessen and Jeff Jordan are personal investors in PandoDaily.] He thought about solving heavy issues like financial inequality and childhood obesity, but at the core of every idea was this belief that few people in Silicon Valley with access to his kind of capital and talent truly understood black culture. His position as a rare, high-profile African American founder in the Valley with access to a lot of capital isn't incidental to his journey -- to Walker, it is his journey. It's his calling. And it's how he intends to build a huge company.

Want to know what life is like as a black entrepreneur in the Valley? Ask away. This is me.

"I made this commitment to dedicate my life to something important and the most important thing I can think of is the demographic shift going on in this country," Walker says. "As long as I'm blessed and fortunate enough to be in the position to be asked, I'll continue to talk about it. If no one else wants to? Fine. It's very clear to me that this is the greatest economic opportunity of my lifetime, and I'm going to dedicate my life to it. I don't get annoyed by the question. Why be selfish when I can evangelize what a great opportunity this? I'm incredibly honored and love every second of helping preach this gospel."

Walker & Co.'s first product is Bevel, a single blade razor that Walker has obsessed over every detail of. When Walker & Co. launched earlier this month, some on Twitter snarked that this was merely another company selling razors over the Web -- the last thing the world needs.

That kind of response is exactly the point Walker is making. It's less that the Valley is racist and more that it just has no clue what specific issues bedevil minority communities -- in this case razor bumps caused from the unholy combination of curly hair and multiblade razors.

But here's what makes this first product such a marketing challenge: It wasn't just a matter of explaining to venture capitalists, the tech press, and would be employees why minorities needed better shaving products. Comparatively, that was the easy part. The hard part will be convincing African American men to put a razor to their faces again, Walker says. Even Walker's own brother's enthusiasm for the company dimmed when Walker mentioned they'd start out with razors. "Whoa," he said. "I'm not putting a razor on my face."

This isn't a build-it-and-they-will-come opportunity. This is going to take an onslaught of "No, seriously, trust me" marketing to succeed. Walker is launching a big part of that strategy today, with the redesign of a site called Bevel Etiquette. It's a partnership with the founders of Street Etiquette, a popular urban style blog. It contains how-to's on grooming and shaving, along with personal horror stories of razor bumps and learning to shave.

But it's more than just a product FAQ. The site has stories on the resurgence of the Fade haircut, the unique importance of Movember in the black community, and celebrates the global barbershop culture.

The marrying of content and commerce isn't a totally new idea. This isn't too different from what Johnson & Johnson did with content for new moms via BabyCenter, or even directions Honest has pushed with Jessica Alba's book on clean, green living and its baby-tracking app. It's even reminiscent in some ways an African American-aimed version of Thrillist. But it's also more than that. Walker is trying to encapsulate the way African Americans spread products through rap, through street culture, and through barber shops in a scalable digital way that still feels authentic. It's a big reason he put his name on the company and puts his personal email on his company blog posts. He wants the community to know, he's had these problems too and he's telling them his products work.

This kind of digital storytelling is core to how Walker & Co. plans on rolling out each product, beyond just razors. The Procter & Gamble for people of color moniker is handy but a bit misleading. Walker's plan isn't to follow up Bevel with, say, a shampoo and then a deodorant for people of color. He doesn't want to check off boxes; he wants to solve problems. Future products are more likely to address Vitamin D deficiencies or the high miscarriage rates among African Americans. You can imagine storytelling, advice, and content will be even more important for marketing solutions to problems like those.

Walker's inspiration for his grassroots-with-a-boost marketing strategy isn't one of the dozens of modern content and commerce driven startups like NastyGal or Thrillist or Fab. It's the company every modern ecommerce 2.0 company is trying to co-exist peacefully next to: Amazon.

At lunch last week, he grabs a napkin and sketches out Jeff Bezos's flywheel of growth. Early on, Bezos believed that if Amazon put every ounce of energy (and a ton of capital) into making customers happy that would result in more traffic, which would bring more sellers onto the platform and that would give customers greater selection, which would intend making customers even happier. That would lead to growth, which would lead to lower negotiated costs, which could be passed on to consumers as lower prices and-- again-- make customers happier which starts the whole cycle again. Voila, the world's largest ecommerce company. 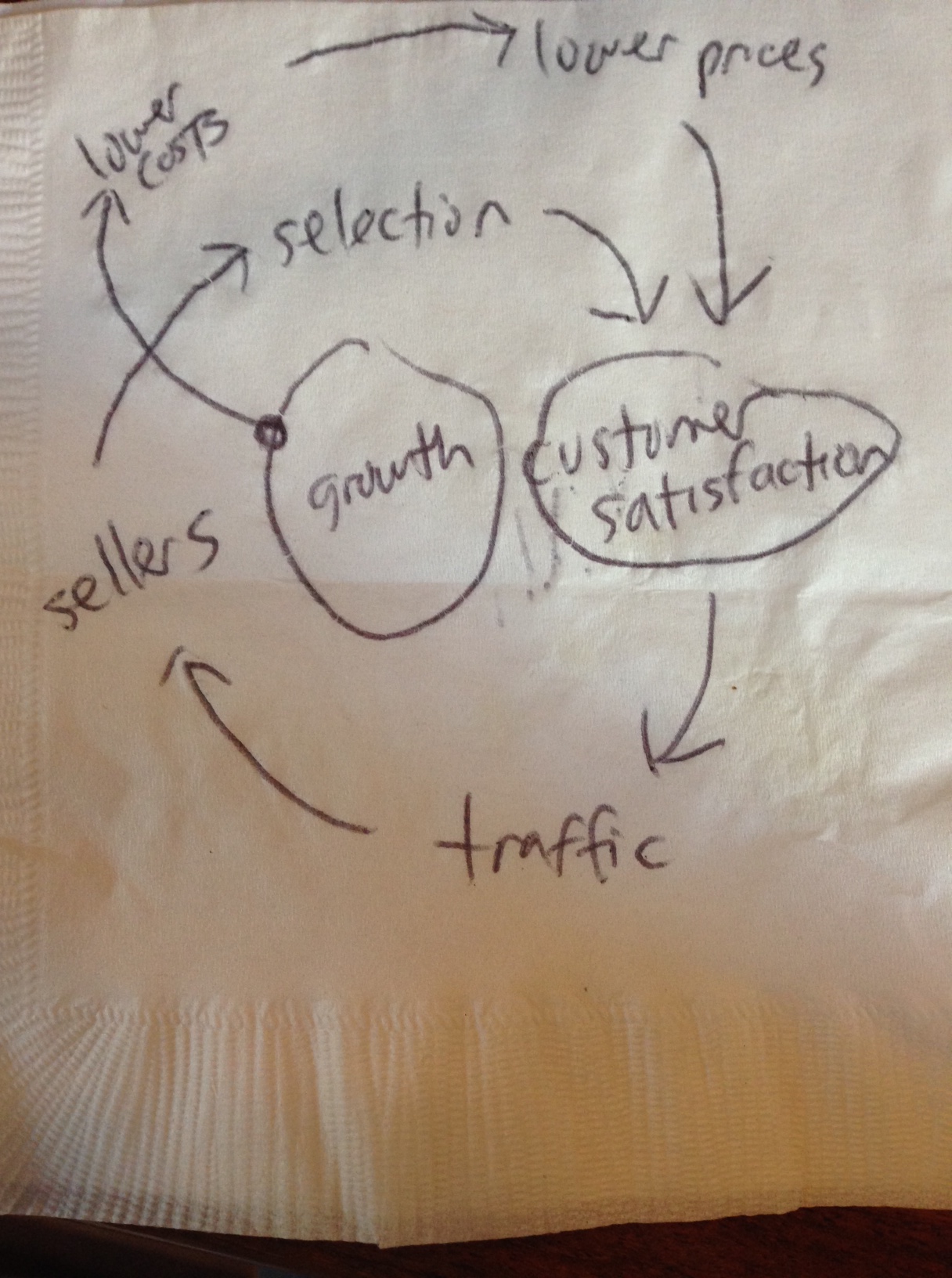 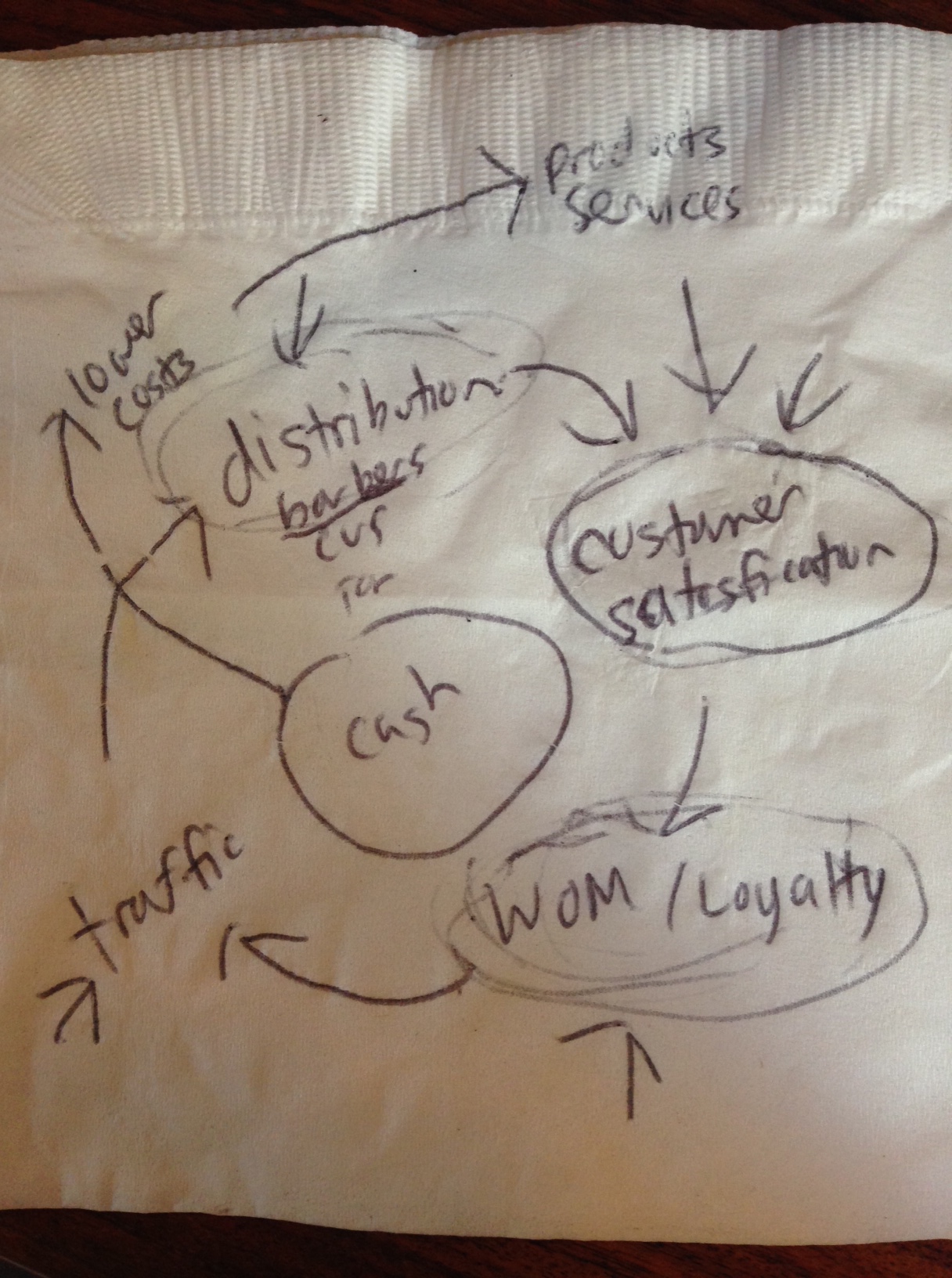 As he goes through the flywheel excitedly, I get the feeling he never tires of explaining this one either. He'll need that as he moves from the fundraising and evangelism phase to actually executing this big, audacious goal.

Walker & Co. is getting started at the same time as much of the Valley is becoming more leery of ecommerce, and there's fatigue with the onslaught of the reusable-consumer-products-in-a-box scheme. There is a reason most consumer package goods companies are more than a century old. This is an expensive game of marketing brand-after-brand, waging patent wars that would make the ADA gasp, and vying for lucrative shelf placements. The old model won't work-- even with Valley-kind-of-cash behind you.

Walker's belief that he's marrying the best ecosystem in the world for rapidly building a company with the world's best culture of taste-making and trendsetting isn't just a nice soundbite: It's the only way this thing works.