Remember Justine Tunney? The OWS-anarchist-turned-cultist-Google-employee who bashed my reporting on Google's for-profit surveillance? Well, today she hit the big time.

Over the last few days, Tunney has been causing a Twitter outrage tsunami after she took full control of the main Occupy Wall Street (OWS) Twitter account, claimed to be the founder of OWS and then proceeded to tweet out stream of ridiculous anarcho-corporatist garbage. She railed against welfare, described the government as "just another corporation," argued poverty was not a political problem but "an engineering problem" and told politicians to "get out of the way." She also debunked what she thought was a misconception: people thought OWS activists were protesting against concentrated corporate power, and that, she claims, is simply not true.

As I wrote before, Tunney's sudden epiphany that not all corporations are evil just happened to coincide with her decision to take a well-paid job at Google. Since then she has become an astroturfer par excellence for the company, including showing up in a comment section to bash my reporting on Google’s vast for-profit surveillance operation. "It never ceases to amaze me how far people have to stretch in order to denounce the one corporation that gives away everything for free," she wrote.

It's important to realize that, before taking her job at Google, Tunney wasn't just an Occupy foot soldier, but a prominent spokesperson for the movement. She’s been written about in the New Yorker and The Nation as one of the founding members of OWS in Zuccotti Park, and was instrumental in setting up and  running OWS’s main Internet communication hub, OccupyWallSt.org. In media profiles, Tunney described herself as “just another geek trying to help out with the revolution,” and you can see her in photographs with other hi-tech revolutionaries occupying a table in Zuccotti Park, hunched over laptops, wires and computer gear.

And this week Tunney's shift away from her former Occupy pals broke the Twitter troll barrier. Her tweets caused such a social media backlash that even Buzzfeed's Rosie Gray felt compelled to cover it:

Occupy Wall Street is dead — but its Twitter account is alive, and it’s become a fascinating hotbed of infighting between rival factions of the group that once slept out in New York’s Zuccotti Park.

Activist Justine Tunney, a Google engineer, has wrested control of the main @OccupyWallSt Twitter account away from other activists and is taking shots at important figures from the movement, including academic David Graeber, considered by some to be the intellectual father of Occupy. Though Tunney founded the account in 2011, other activists once had access to it.

The big question: who founded Occupy? But actually Tunney's claim that she founded Occupy is by far the least interesting part of the story. Buzzfeed's Gray missed a much weirder and sinister development: Tunney — a Google employee — has been pushing a crazy crusade to fund a paid mercenary protester army to fight against Wall Street — all via KickStarter.

No joke, grrrrls and bros! Tunney wants to crowdsource a private army revolution! 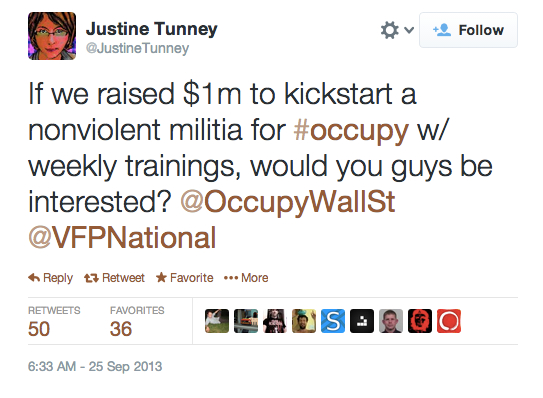 (Possible Buzzfeed headline for this story: ten things only Googlers who occupied Wall Street and want to crowdfund a militia will understand)

Tunney's call to arms was seconded by Micah White, former editor of AdBusters who now runs a boutique social movement consulting business. White describes his business as a "social change consulting firm founded by the American creator of the Occupy Wall Street meme"  which "serves a hand-picked international clientele of social revolutionaries and movements."

Not everyone was as excited by Tunney's idea as Mr. White. People quickly crowded Tunney's Twitter feed, confused by why she needed money to pay people to participate in political protests. Tunney dismissed the naysayers, tweeting out a bunch of crass "what's in it for me" market-based explanations:

"Cash incentivizes people to show up and make ends meet.”

"I'm not going to ask people to be cannon fodder against the NYPD without giving something in return" A baffled Lithuanian woman criticized her plan, explaining that she did not need to be paid to protest against the Soviet Union in the early 1990s because she was acting out of conviction and moral and political belief. But Tunney wasn't convinced. She thought that a person shouldn't protest just because they have a political belief:

"So you're asking us to give people an ideology and a chip on their shoulder instead of cash."

Yeah, because what kind of anarchist asshole thinks political protesters should act out of genuine political conviction instead of cash incentives? Even President Vladimir Putin pays people to protest on his behalf — and Putin is a great man because he protects Edward Snowden —  so why shouldn't Occupy leaders like Tunney get people to do the same for them?

My suggestion: If Justine Tunney's Kickstarter campaign ever reaches its goal, she should set up her anarcho-corporate militia recruiting centers near homeless shelters and in low-income neighborhoods. These places are full of motivated individuals with the perfect skill set for the job: experience being on the receiving end of police beat-downs and willing to work for cheap.

What else could a techno-utopian want?

[An earlier version of this story identified Daiva Venckus as a “Lithuanian guy”. She is, of course, a woman. I apologize. — YL]