Bitcoiners prefer finance and kindles to sex: A revealing look into the interest graph of crypto-currency users

Once the shadowy curiosity of single, 32-year-old libertarian males, bitcoin is going mainstream. Look no further than old school media companies like the Wall Street Journal and Forbes dedicating exclusive areas of their online publications to the cryptographic digital currency. Morning TV news shows have also gotten on the bandwagon. Earlier this month, the Chicago Sun Times, the ninth largest US newspaper by readership, took it a step further by conducting a bitcoin paywall trial that allowed users to access content by making micro-payment donation to charity.

But if bitcoin is no longer just for cypherpunks and anarchists, what does the average bitcoiner look like today?

With such a large and presumably diverse user base, it’s a difficult question, and any answer is bound to be fuzzy. Short of conducting a census, one method that can yield insight into these demographics is to look at the interest graph of topics that bitcoin enthusiasts are passionate about.

To do this, PandoDaily reached out to Gravity, the recently-acquired interest graphing company that has compiled detailed (but anonymized) profiles on more than 200 million global internet users. Within each profile, Gravity is able to determine with surprising accuracy the subjects that individual users care about based on the content they read online, and more specifically the way in which they consume that content, as well as their social behavior, including liking, sharing, and commenting.

Gravity uses insights drawn from this data to help publishers (including PandoDaily) customize content to individual users. Judging by the user engagement results that this customization drives, it seems the company does know what individuals want and care about.

Gravity can also uses its vast stores of user behavior and interest data to map connections around particular audiences, demographics, or subjects. In the past, the company has noted the vast differences in interests between fans of the Tesla Model S electric vehicle and Prius hybrids. Tesla devotees are more likely to be interested in traffic congestion, Marissa Mayer, and the financial crisis, for example, than the general public. Prius enthusiasts instead over index for topics relating to sustainability, Apple products, and, surprisingly, waterfowl hunting.

In similar fashion, Gravity assembled a bitcoin interest graph at PandoDaily’s request. Many of the takeaways are unsurprising at first glance, yet revealing upon closer inspection.

Perhaps counterintuitively, this community appears to favor Microsoft over Google, albeit slightly. Perhaps this is a reflection of the currency’s extreme popularity outside the US. Further, one thing that interest graphs cannot shed light on is the tone of the interest. For example, users who hate Microsoft with a burning passion and thus read voraciously on the company and regularly share and comment with invective would still register as highly interested in the company. Nonetheless, strong interest more often than not indicates a positive association, Gravity notes.

Bitcoin enthusiasts also show strong interest in societal topics, particularly those related to government and law. These individuals are also better than 17-times more likely than average to be interested in global warming and have a better than 8-times greater chance of being interested in citizenship.

On the other end of the spectrum, bitcoin fans individuals show a relatively low levels of interest in entertainment and sports, as compared to the general internet user audience. According to Gravity’s data, bitcoin enthusiasts are 36 percent less likely than average to be interested in physical exercise and the same 36 percent less likely than the general public to be interested in sex. (Ok, so maybe not all the stereotypes have been disproven.)

The bitcoin community may always skew toward fans of business and technology, but the above data would suggest that the demographics are shifting beyond the currency’s early extremes. Given the hope that bitcoin will one day be a ubiquitous and broadly disruptive instrument within the global economy, this is a good sign.

The closer to the general population the interest of bitcoin fans track, the harder it will be to argue that this is a niche phenomenon. Observing how these demographic and interest trends change over time should offer a revealing look into how realistic that goal of ubiquity really is. 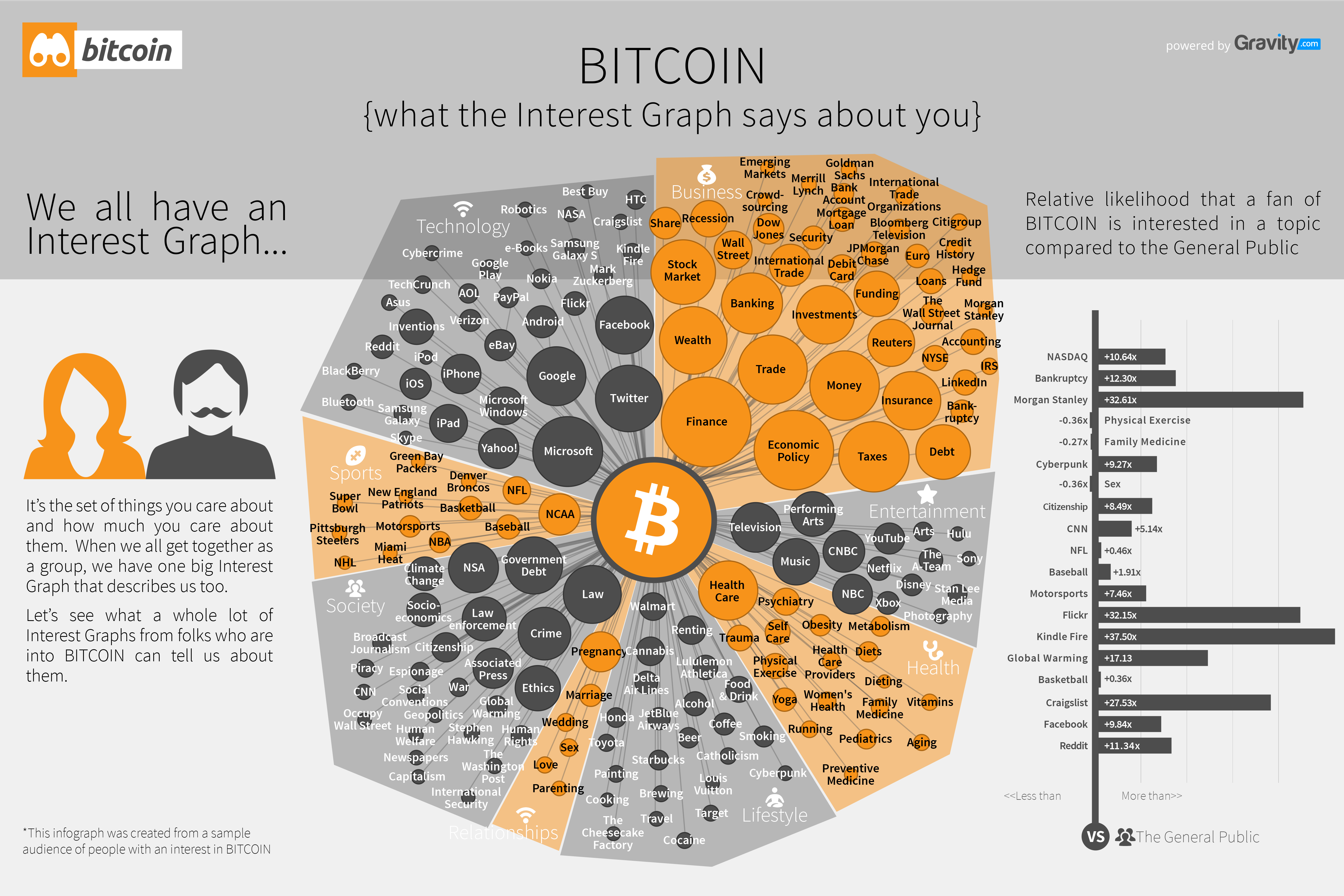