Late last month, I revealed the contents of court documents which show the illegal fixing of salaries by some of Silicon Valley’s largest companies, and most respected CEOs. Such brazen, and meticulously documented, anti-competitive behavior by the likes of Steve Jobs and Eric Schmidt  was hard to believe, let alone justify.

Fortunately, it's rare that those CEOs ever have to excuse their bad behavior personally. Instead when the heads of companies like Apple, Adobe, Google, Intel, Intuit, Microsoft and others, are called upon to explain why it's okay to screw over employees—or their consumers—they know exactly who to call.

His name is Kevin Murphy.

Murphy is the University of Chicago free-market economist hired by lawyers for the defendants in the Silicon Valley wage theft lawsuit (Google, Apple, Intel, Adobe, Intuit, Pixar, LucasFilm) to provide “expert” testimony. As revealed in court documents obtained by PandoDaily, most of Murphy’s testimony was focused on trying to discredit and debunk the tech workers’ own expert, Edward Leamer, a UCLA labor and economics professor.

Leamer  provided a report to the court demonstrating how and why the tech companies’ secret non-solicitation agreement—whose existence was not challenged—lowered their  employees’ wages. The big tech firms’ lawyers were fighting to have Leamer’s report removed from the record, an important part of their strategy to have the class action suit tossed—and they knew that if anyone could discredit Leamer's work, Murphy could.

Kevin Murphy has a long history of trying to convince courts that workers are not being screwed and that dominant monopoly corporations are good citizens, despite evidence to the contrary. By the standards of the economics guild, Murphy is a respected figure: Professor of Economics at the University of Chicago, senior fellow at the Hoover Institute, protégé of and longtime collaborator with U. Chicago economist Gary Becker, a far-right loon notorious for proposing an unregulated human organs commodities exchange, and a bigtime fan of Chilean dictator Gen. Augusto Pinochet. In 2007, on the eve of the financial crash, Murphy and Becker co-authored a paper celebrating America’s record inequality, “The Upside of Income Inequality.”

Less well-known, and less respectable, is Murphy’s work for a sleazy restaurant industry front group, the Employment Policies Institute, set up to fight minimum wage raises and run by a PR kingpin named Rick Berman. Over the years, Berman, whom 60 Minutes nicknamed “Dr. Evil”, has been paid by everyone from Big Tobacco companies to the ultraconservative Lynde and Harry Bradley Foundation to wage war on nonsmoking laws, minimum wage hikes, teachers unions, the Humane Society, ACORN... Berman was even paid to attack and discredit the documentary film “Supersize Me.”

“The nonprofit group is run by a public relations firm that also represents the restaurant industry, as part of a tightly coordinated effort to defeat the minimum wage increase that the White House and Democrats in Congress have pushed for.

“...What is clear is that the reports by the Employment Policies Institute are a critical element in the lobbying campaign against the increase in the minimum wage, as restaurant industry groups, in their own statements and news releases, often cite the institute’s reports, creating the Washington echo chamber effect that is so coveted by industry lobbyists.” According to Employment Policy Institute literature obtained by PandoDaily, Murphy officially sits on the group’s advisory board. 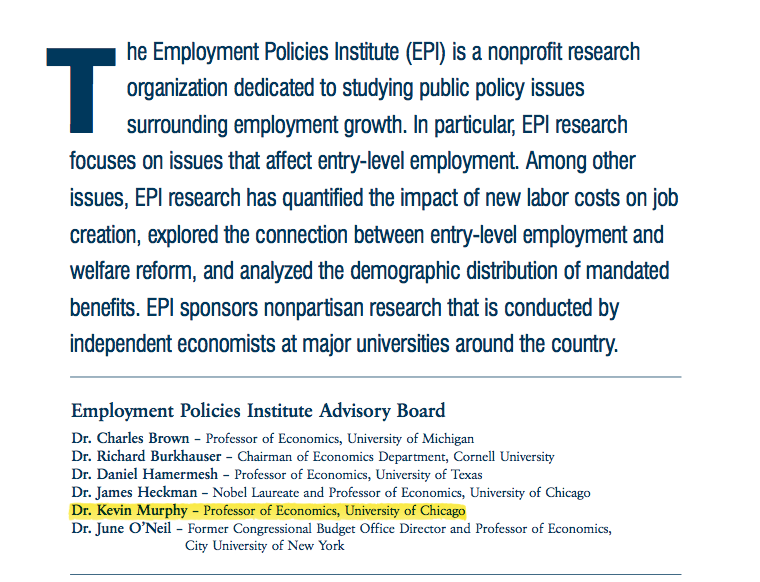 In fact, Murphy’s work with the Employment Policy Institute stretches back to at least early 1995, shortly after Princeton economists Alan Krueger (later Obama’s chief economist) and David Card published a landmark paper proving that raising  the minimum wage does not lead to job cuts in the fast food industry. The Krueger-Card study was heresy to the free market economics guild as preached by Milton Friedman and Gary Becker; and so Kevin Murphy was tapped to play the role of free-market Inquisitor.

Shortly after Krueger and Card published their paper on minimum wage, they were subjected to a blistering smear campaign designed to destroy their credibility, a campaign that initially was believed to be an honest academic spat between competing economists—Krueger-Card on one side, Kevin Murphy and co-authors on the other. As first described in a February 1995 article in the Christian Science Monitor, "Maximum Debate On Minimum Wage":

More than a year ago, Professor Card and Alan Krueger, a Princeton colleague now working in the Department of Labor, took a new tack. Rather than looking at nationwide statistics for employment, they studied the impact of changes in the minimum wage by individual states on one industry - the fast-food establishment.... They found the wage hike in New Jersey produced no job losses for either teenagers or adults. Nor did the minimum-wage rise result in restaurants closing their doors.

Then last month Deere, Finis Welch, a colleague at A&M, and Kevin Murphy from the University of Chicago, delivered a paper looking at the last increase in the minimum wage - from $3.35 to $3.80 on April 1, 1990 and then to $4.25, the present level, on April 1, 1991. They found that the 27 percent jump chopped teenage jobs 8 to 9 percent - an apparently big employment loss. What the public didn't know until later was that Murphy's pushback against Krueger and Card was part of a campaign led by his colleagues at the Employment Policies Institute.

As described in the American Prospect,

“In early 1995 a vicious counterattack began, substantially underwritten by the fast food industry. In March the Employment Policies Institute, the leading employers group opposing the minimum wage, unveiled a counter study.... Berman's allegations kicked off a public op-ed and private whispering campaign to undermine the credibility of the study and the reputations of Card and Krueger.”

Kevin Murphy's paper slamming Alan Krueger’s minimum wage study, “Sense and Nonsense on the Minimum Wage,” was published in the Kochs' CATO Institute journal, “Regulation,” in early 1995. As noted, Murphy's paper was timed perfectly to synch with Berman’s and the restaurant industry’s PR campaign to smear Krueger’s reputation, and discredit any heretical thought that a higher minimum wage may not hurt—indeed, may actually help—employment.

Helping the low-wage restaurant industry might pay Murphy's rent but, as any expert-for-hire knows, Silicon Valley is where the real money is. In 2002, Murphy was called upon to testify on behalf of Microsoft in the US antitrust suit first launched in the late Clinton era. He argued that Microsoft’s monopoly power and behavior did not hinder competition and had no measurable anti-competitive effect on, for example, Netscape’s browser. Unfortunately for Microsoft, the judge ruled that Murphy’s testimony “could not be given much weight.”

More recently, Murphy was brought in to defend Apple against the DoJ’s antitrust suit over Apple’s ebook price-fixing. Murphy’s expert opinion — an opinion shared by Apple’s lawyers — was that Apple could not have been acting like an illegal monopoly when it fixed ebook prices, because Apple was always acting in its economic self-interest — and according to the free-market faith that Murphy peddles, if a company is acting in its own economic interest, it is by definition competitive, and therefore not acting like a monopoly. That may sound clinically insane to the uninitiated, but in the University of Chicago and across much of the economics guild, it's the Word of God.

“Having no case law support...Apple instead relies on its economic expert, Dr. Kevin Murphy, to suggest that Apple’s erroneous legal standard—i.e., whether Apple’s conduct was in its own interests—is of some significance for this case.

“Dr. Murphy’s economic self-interest test is nothing more than a façade...Apple appears to believe that merely because Dr. Murphy’s opinions are those of an economist, it follows necessarily that he is offering 'economic analysis.' But this is no more necessarily true than claiming a prediction that the Mets will win the World Series this year constitutes a 'legal opinion' if it is made by a lawyer.” And yet, despite court after court rejecting Murphy’s “expert” opinions, he was the man Silicon Valley titans once again turned to in 2013, this time to “prove” that their secret non-solicitation agreement did not lower employees’ wages.

Unsurprisingly, as in so many previous cases, Murphy’s testimony fell on deaf ears. As Judge Lucy Koh wrote in her opinion:

“Before the Court turns to an analysis of the competing methodologies of Dr. Leamer and Defendants’ expert, Dr. Murphy, the Court notes that the importance of these statistical models is diminished in light of the extensive documentary evidence that supports Plaintiffs’ theory of impact. In other contexts, courts have long noted that statistical and anecdotal evidence must be considered in tandem....This Court could not identify a case at the class certification stage with the level of documentary evidence Plaintiffs have presented in the instant case.”

In other words: There was so much real-world evidence—in emails, depositions, the Department of Justice antitrust settlement—proving that the Big Tech secret non-solicitation pacts were designed to suppress wages, that abstractions spun by the economics guild were essentially superfluous, especially when they contradicted what Silicon Valley’s Masters of the Universe themselves already said and wrote.

So given Murphy’s low strike rate, why do tech companies still call on him to defend their attempted wage fixing?

One answer could be that he’s one of the few “experts” who is able to defend Silicon Valley's most egregiously anti-competitive CEOs while keeping a straight face. That makes Kevin Murphy a valuable asset for the billionaire class in the era of inequality.