Just hours after last weekend’s ouster of Ukrainian president Viktor Yanukovych, one of Pierre Omidyar’s newest hires at national security blog “The Intercept,” was already digging for the truth.

Marcy Wheeler, who is the new site's "senior policy analyst," speculated that the Ukraine revolution was likely a “coup” engineered by “deep" forces on behalf of “Pax Americana”:

“There's quite a bit of evidence of coup-ness. Q is how many levels deep interference from both sides is.”

These are serious claims. So serious that I decided to investigate them. And what I found was shocking.

Wheeler is partly correct. Pando has confirmed that the American government – in the form of the US Agency for International Development (USAID) – played a major role in funding opposition groups prior to the revolution. Moreover, a large percentage of the rest of the funding to those same groups came from a US billionaire who has previously worked closely with US government agencies to further his own business interests. This was by no means a US-backed "coup," but clear evidence shows that US investment was a force multiplier for many of the groups involved in overthrowing Yanukovych.

But that's not the shocking part.

What's shocking is the name of the billionaire who co-invested with the US government (or as Wheeler put it: the " deep force" acting on behalf of "Pax Americana").

Step out of the shadows.... Wheeler's boss, Pierre Omidyar.

Yes, in the annals of independent media, this might be the strangest twist ever: According to financial disclosures and reports seen by Pando, the founder and publisher of Glenn Greenwald’s government-bashing blog,“The Intercept,” co-invested with the US government to help fund regime change in Ukraine.

[Update: Wheeler has responded on Twitter to say that her Tweets were taken out of context, but would not give specifics. Adam Colligan, with whom Wheeler was debating, commented on Pando that "while Wheeler did raise the issue of external interference in relation to a discussion about a coup, it was not really at all in the manner that you have portrayed." Further "[Pax Americana] appeared after the conversation had shifted from the idea of whether a coup had been staged by the Ukrainian Parliament to a question about the larger powers' willingness to weaken underlying economic conditions in a state." Neither Wheeler or Colligan has commented on the main subject of the story: Pierre Omidyar's co-investment in Ukrainian opposition groups with the US government.]

When the revolution came to Ukraine, neo-fascists played a front-center role in overthrowing the country’s president. But the real political power rests with Ukraine’s pro-western neoliberals. Political figures like Oleh Rybachuk, long a favorite of the State Department, DC neocons, EU, and NATO—and the right-hand man to Orange Revolution leader Viktor Yushchenko.

Last December, the Financial Times wrote that Rybachuk’s “New Citizen” NGO campaign “played a big role in getting the protest up and running.”

New Citizen, along with the rest of Rybachuk’s interlocking network of western-backed NGOs and campaigns— “Center UA” (also spelled "Centre UA"), “Chesno,” and “Stop Censorship” to name a few — grew their power by targeting pro-Yanukovych politicians with a well-coordinated anti-corruption campaign that built its strength in Ukraine’s regions, before massing in Kiev last autumn.

The efforts of the NGOs were so successful that the Ukraine government was accused of employing dirty tricks to shut them down. In early February, the groups were the subject of a massive money laundering investigation by the economics division of Ukraine’s Interior Ministry in what many denounced as a politically motivated move.

Fortunately the groups had the strength – which is to say, money – to survive those attacks and continue pushing for regime change in Ukraine. The source of that money?

According to the Kyiv Post, Pierrie Omidyar's Omidyar Network (part of the Omidyar Group which owns First Look Media and the Intercept) provided 36% of “Center UA”’s $500,000 budget in 2012— nearly $200,000. USAID provided 54% of “Center UA”’s budget for 2012. Other funders included the US government-backed National Endowment for Democracy.

In 2011, Omidyar Network gave $335,000 to “New Citizen,” one of the anti-Yanukovych "projects" managed through the Rybachuk-chaired NGO "Center UA." At the time, Omidyar Network boasted that its investment in "New Citizen" would help "shape public policy" in Ukraine:

“... With support from Omidyar Network, New Citizen will strengthen its advocacy efforts in order to drive greater transparency and engage citizens on issues of importance to them.” In March 2012, Rybachuk — the operator behind the 2004 Orange Revolution scenes, the Anatoly Chubais of Ukraine — boasted that he was preparing a new Orange Revolution:

“People are not afraid. We now have 150 NGOs in all the major cities in our ‘clean up Parliament campaign’ to elect and find better parliamentarians....The Orange Revolution was a miracle, a massive peaceful protest that worked. We want to do that again and we think we will.”

To understand what it means for Omidyar to fund Oleh Rybachuk, some brief history is necessary. Rybachuk’s background follows a familiar pattern in post-Soviet opportunism: From well-connected KGB intelligence ties, to post-Soviet neoliberal networker.

In the Soviet era, Rybachuk studied in a military languages program half of whose graduates went on to work for the KGB. Rybachuk’s murky overseas posting in India in the late Soviet era further strengthens many suspicions about his Soviet intelligence ties; whatever the case, by Rybachuk’s own account, his close ties to top intelligence figures in the Ukrainian SBU served him well during the Orange Revolution of 2004, when the SBU passed along secret information about vote fraud and assassination plots.

In 1992, after the collapse of the Soviet Union, Rybachuk moved to the newly-formed Ukraine Central Bank, heading the foreign relations department under Central Bank chief and future Orange Revolution leader Viktor Yushchenko. In his central bank post, Rybachuk established close friendly ties with western government and financial aid institutions, as well as proto-Omidyar figures like George Soros, who funded many of the NGOs involved in “color revolutions” including small donations to the same Ukraine NGOs that Omidyar backed. (Like Omidyar Network does today, Soros’ charity arms—Open Society and Renaissance Foundation—publicly preached transparency and good government in places like Russia during the Yeltsin years, while Soros’ financial arm speculated on Russian debt and participated in scandal-plagued auctions of state assets.)

In early 2005, Orange Revolution leader Yushchenko became Ukraine’s president, and he appointed Rybachuk deputy prime minister in charge of integrating Ukraine into the EU, NATO, and other western institutions. Rybachuk also pushed for the mass-privatization of Ukraine's remaining state holdings.

Over the next several years, Rybachuk was shifted around President Yushchenko’s embattled administration, torn by internal divisions. In 2010, Yushchenko lost the presidency to recently-overthrown Viktor Yanukovych, and a year later, Rybachuk was on Omidyar’s and USAID’s payroll, preparing for the next Orange Revolution. As Rybachuk told the Financial Times two years ago:

“We want to do [the Orange Revolution] again and we think we will.”

Some of Omidyar’s funds were specifically earmarked for covering the costs of setting up Rybachuk’s “clean up parliament” NGOs in Ukraine’s regional centers. Shortly after the Euromaidan demonstrations erupted last November, Ukraine’s Interior Ministry opened up a money laundering investigation into Rybachuk’s NGOs, dragging Omidyar’s name into the high-stakes political struggle.

“Police are investigating Center UA, a public-sector watchdog funded by Western donors, on suspicion of money laundering, the group said. The group’s leader, Oleh Rybachuk, said it appears that authorities, with the probe, are trying to warn other nongovernmental organizations that seek to promote democracy, transparency, free speech and human rights in Ukraine.

“According to Center UA, the Kyiv economic crimes unit of the Interior Ministry started the investigation on Dec. 11. Recently, however, investigators stepped up their efforts, questioning some 200 witnesses.

“... Center UA received more than $500,000 in 2012, according to its annual report for that year, 54 percent of which came from Pact Inc., a project funded by the U.S. Agency for International Development. Nearly 36 percent came from Omidyar Network, a foundation established by eBay founder Pierre Omidyar and his wife. Other donors include the International Renaissance Foundation, whose key funder is billionaire George Soros, and National Endowment for Democracy, funded largely by the U.S. Congress.”

What all this adds up to is a journalistic conflict-of-interest of the worst kind: Omidyar working hand-in-glove with US foreign policy agencies to interfere in foreign governments, co-financing regime change with well-known arms of the American empire — while at the same time hiring a growing team of soi-disant "independent journalists" which vows to investigate the behavior of the US government at home and overseas, and boasts of its uniquely "adversarial" relationship towards these  government institutions.

Of the many problems that poses, none is more serious than the fact that Omidyar now has the only two people with exclusive access to the complete Snowden NSA cache, Glenn Greenwald and Laura Poitras. Somehow, the same billionaire who co-financed the “coup” in Ukraine with USAID, also has exclusive access to the NSA secrets—and very few in the independent media dare voice a skeptical word about it.

In the larger sense, this is a problem of 21st century American inequality, of life in a billionaire-dominated era. It is a problem we all have to contend with—PandoDaily’s 18-plus investors include a gaggle of Silicon Valley billionaires like Marc Andreessen (who serves on the board of eBay, chaired by Pierre Omidyar) and Peter Thiel (whose politics I’ve investigated, and described as repugnant.)

But what is more immediately alarming is what makes Omidyar different. Unlike other billionaires, Omidyar has garnered nothing but uncritical, fawning press coverage, particularly from those he has hired. By acquiring a “dream team” of what remains of independent media — Greenwald, Jeremy Scahill, Wheeler, my former partner Matt Taibbi — not to mention press “critics” like Jay Rosen — he buys both silence and fawning press.

Both are incredibly useful: Silence, an absence of journalistic curiosity about Omidyar’s activities overseas and at home, has been purchased for the price of whatever his current all-star indie cast currently costs him. As an added bonus, that same investment buys silence from exponentially larger numbers of desperately underpaid independent journalists hoping to someday be on his payroll, and the underfunded media watchdogs that survive on Omidyar Network grants.

And it also buys laughable fluff from the likes of Scahill who also boasted to the Daily Beast of his boss’ close involvement in the day to day running of First Look.

“[Omidyar] strikes me as always sort of political, but I think that the NSA story and the expanding wars put politics for him into a much more prominent place in his existence. This is not a side project that he is doing. Pierre writes more on our internal messaging than anyone else. And he is not micromanaging. This guy has a vision. And his vision is to confront what he sees as an assault on the privacy of Americans.”

Now Wheeler has her answer — that, yes, the revolutionary groups were part-funded by Uncle Sam, but also by her boss — one assumes awkward follow up questions will be asked on that First Look internal messaging system.

Whether Wheeler, Scahill and their colleagues go on to share their concerns publicly will speak volumes about First Look's much-trumpeted independence, both from Omidyar's other business interests and from Omidyar's co-investors in Ukraine: the US government.

Editor's note: Pando contacted Omidyar Networks for comment prior to publication but had not received a response by press time. We will update this post if they do respond.

Update: First Look staffer, Glenn Greenwald, has responded to Pando's report here. Paul Carr, the editor of the above report, has written a follow-up here. 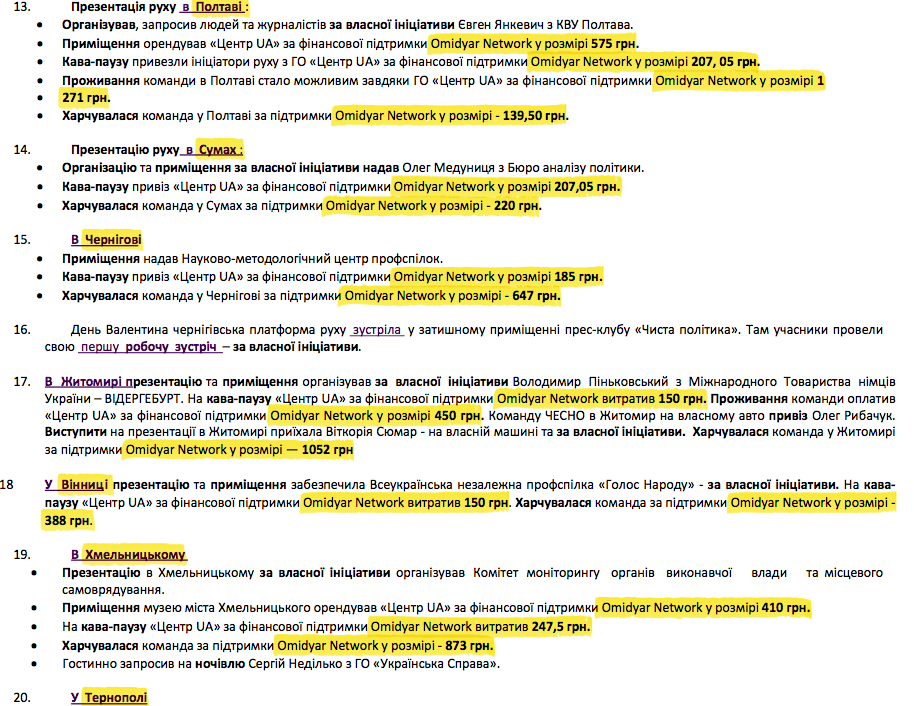