Dancing Giants: How a rusting giant can act more like a startup

Trevor Owens, founder of Javelin (formerly Lean Startup Machine), has a bleak-- but simple -- prescription for big companies: Act more like a startup or enjoy a long slide into irrelevance and creative destruction.

He’s a proponent of the lean startup methodology made famous by Eric Ries and Steve Blank, which employ rapid, data-driven experimentation to develop products the market really wants. While startups may groan at another mention of the lean startup methodology, it's one of the better solutions for how a big company can do something as vague as "be more startup-y." That's because it relies on hard data and a scientific methodology, not fuzzy, unquantifiable things like, get UP bands for all your employees and allow dogs in the room.

At the core of the methodology is a basic question big companies don't ask enough because they have the luxury of resources: Should a product even be built and does anyone want it? 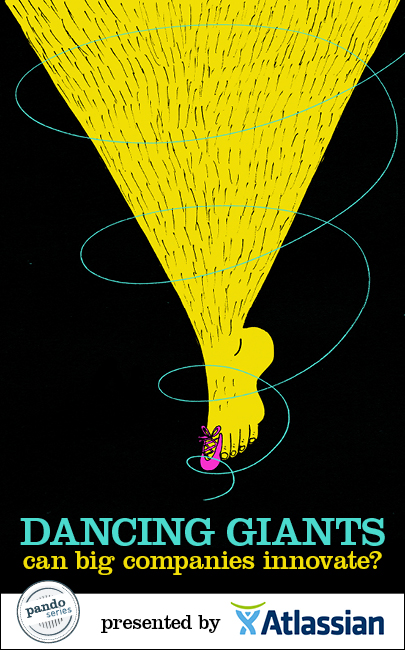 Owens is in the news just as PandoDaily is taking a look at how big companies can still innovate. We covered the latest lean tool out of Owens' company Javelin earlier this week, and later this month, he's got a book coming out on the topic, The Lean Enterprise: How Corporations Can Innovate Like Startups.

As markets change faster than ever before and the cost to start a company gets ever lower, the pressure to innovate or die has never been greater on the giants. I caught up with Owens at his office in New York to discuss how companies can do more than talk about being more "startup-like."

Why should big companies emulate startups?

Back in the day, everyone wanted to work at a place like IBM. Today corporations are viewed as stodgy. Many of us don’t know what they do anymore and even if we did, we probably wouldn’t care. These bloated companies with their thousands of workers trapped within walls of bureaucracies aren’t growing anymore. In fact, their markets are shrinking.

The time between the birth, growth, and death of a large enterprise has shrunk dramatically over the years. Of the companies listed on the Fortune 500 in 1955, nearly 87 percent of them have either gone bankrupt, merged, reverted to private ownership, or lost enough gross revenue to be delisted. A study of the S&P 500, which ranks companies by market cap, found the average age of a business on the list was 61 years in 1958 but only 18 years in 2012. In the past, being big was in itself a defensible position. Now it’s not.

Big companies see this, and feel the cultural pull away from them. They’re starved for growth. If they want to compete, they have to become more like startups. Otherwise they’re in jeopardy of disappearing all together.

Why do big companies have trouble innovating?

When a company gets big, bureaucracy is layered throughout. In some ways it’s a necessary part of growth. The reason it exists is so the company doesn’t fall apart. The more people you have working for you, the more you need to manage them to ensure they get the support they need to do their jobs. Then you have whole divisions that exist simply to produce and sell, and their heads aren’t interested in new ideas, products, or ways to do things that could interfere with their bottom line, because that’s how they’re judged and compensated.

Couple all that with the main goal of a company, which is to serve existing customers. That’s where the resources go. Corporations offer an environment of execution and maintenance but not innovation, and rely on good management to target their best customers and deliver better products. That’s fine when they’ve identified and mastered their markets, but they get disrupted when a new entrant comes along that can deliver a good enough product at much lower cost of higher convenience. New entrants target low-value customers then quickly climb the value chain with a better cost structure. Think Netflix versus Blockbuster or Napster invading the recording industry.

Part of issue is there’s no management philosophy built around how to innovate within a large enterprise. With new companies we have the Lean Startup Method, which offers a framework for constantly improving a product to find the best product-market fit before you actually go into production or invest gobs of money in creating any infrastructure. This is the first time we’ve had a repeatable process. But there is no analog for large companies. They have to develop some basic structures just to deploy lean startup methods.

There are two parts to innovating like a startup. One is generating a flow of high-quality  (i.e. validated) ideas. We call this “innovation flow” – similar to the idea of deal flow for venture capitalists. If a VC doesn’t have good deal flow he won’t get returns.  The other is the need to create a structure to incubate these ideas called an “innovation colony.”

Intuit does the first part well.  It kind of copied our lean startup workshop and scaled it throughout the company. After employees have been trained in lean startup methods and know how to validate ideas, they can take advantage of unstructured time (also known as 10 percent time) to work on any project they want to validate that can potentially become a successful new product. If they find they have something they can go to their boss for funding, and this has led to some viable products, including Sparkrent.

Facebook is famous for hackathons. That’s where the Timeline was first imagined. Employees can work on anything that relates to the company’s products and deliver a down-and-dirty prototype during a 24-hour hackathon. Companies like Nordstrom are becoming sophisticated at lean startup methods. It runs weeklong experiments. One from 2011 involved an iPad app that helps users choose eyeglass frames and another addressed the physical design of its retail stores.

Companies also acquire startups to “buy growth,” although few buy at the right time. One that did was Twitter, which acquired Vine before it launched, left it alone to carry on its mission without interference, and it ended up a great acquisition. Vine clearly had product/market fit right out of the gate.

What about skunkworks, innovation labs, and intrapreneur programs?

For large companies there are three traditional innovation structures:

First, there’s skunkworks, when you hire a bunch of smart people to work on pie-in-the-sky technologies. Motorola, for example, hired away a former head of DARPA to run its skunkworks. It only works on highly technical products with low market risk -- like a faster jet plane or Amazon Web Services. It’s not good for developing, say, an app like The Daily and it won’t help you find a market or determine product-market fit.

Then there are innovation labs. Perhaps the best known was Xerox Parc, which was the original Innovation Lab. It came up with brilliant ideas but failed to commercialize them – until Steve Jobs came along and borrowed (some say stole) them. Innovation labs that focus on innovative technologies are known to struggle with commercialization.

Finally, you have intrapreneur programs, which are the latest fad: a four- or eight-week program where employees take time off, explore some ideas and a product, and have to sell it to a business unit within the company.  The issue comes back to the incentives inherent in successful business units. They resist ideas they didn’t come up with, no matter how big their potential. They favor incremental innovation that won’t cannibalize their own sales over something that could change their industry for the better.

As a corollary you can have something we recommend: innovation colonies. This is a way for companies to create a fund to invest in ideas their employees have. To participate, though, the employee has to give up the security of their jobs in exchange for equity in the venture. Microsoft, Kaplan, Nike, Barclays, and Disney are just some of the companies utilizing innovation colonies.

Here’s how they work: Employees pitch their ideas, which have been validated, get funding, and own a majority of the equity in these products in the seed stage. They work with other entrepreneurs and the company offers advisement, mentoring and other resources. They seek to develop products, take them to market, and if they gain any traction they can raise a series A with outside investors. They run the company without interference from the Mother ship. In the end, the big company can offer to buy their startups back.  The magic is that the entrepreneurs are incentivized to build a real business.

Is it a good idea to offer equity stakes within corporate environments?

Oh, yes. In fact, we advocate for employees to get equity on their projects. Let me emphasize that I mean equity in the product, not the company. Equity attracts the best people because entrepreneurs are motivated by achievement and autonomy and are willing to take less in salary in exchange for more upside in their ideas. Of course, they want to see millions from their products, if they’re successful, but it’s not just about money; it’s what it represents. It’s about being recognized for your achievements. Face it: you have to be a little crazy to be an entrepreneur. This is the whole point of the innovation colony structure.

If you don’t give employees who are entrepreneurially minded equity in their projects they’ll leave to start their own companies. This happens even at innovation-friendly environments like Google: Ev Wiliams (Twitter), Kevin Systrom (Instagram), Dennis Crowley (Foursquare) all left to launch their own ventures. It’s unfortunate that Google doesn’t share in any of the billions they’ve created.

Not only do you want to hire the best and brightest, you want them to stick around and create the kinds of innovative products and services that will also ensure your company sticks around for the long term. Some large companies make the mistake of addressing a problem by simply throwing 15 developers at a problem thinking it will lead to something. Instead, great ideas come from all over an organization and may even seem like bad ideas at first until you validate them.

Once a company realizes this, anything is possible.