Will the Box IPO be John the Baptist to Dropbox's Jesus?

In a widely anticipated move, enterprise cloud storage company Box has filed an S-1 ahead of its IPO. But while the world gets its first look at Box’s numbers today, the process of going public has been in the works for a while, kept secret thanks to provisions of the JOBS Act.

Gone are the days when companies must file their prospectus months before their IPO and subject themselves to endless public (and SEC) scrutiny. Now, any company generating less than $1 billion in revenue can file stealthily and then suddenly pull the curtain back just weeks prior to their IPO. Twitter took this route, as have GoPro, Care.com, and other well known names.

The strategy allows CEOs to time the public markets in ways they never were able to before. It could also make buying shares on IPO a sucker's bet for retail investors.

Box announced its S-1 filing on Twitter, which is fitting given that Twitter's IPO was the last to use the same "surprise!" timing strategy. 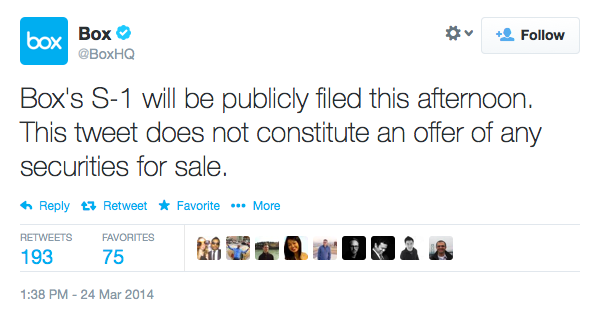 The JOBS Act was enacted to make life easier for companies going public and it unquestionably has. Rather than setting the IPO machine in motion publicly and then holding off on pulling the trigger if market conditions soften, companies can prep behind a cover of darkness and then “reveal” themselves when the moment is right. Box CEO Aaron Levie suggested late last year that a mid-Summer IPO was likely, but it appears that timeline was accelerated by several months.

The approach doesn't only allow companies to time the markets and shock-and-awe investors, it pushes reporters back on their heels too. When we don't see something coming and have months to pre-plan coverage, it winds up being more of a quickly written rehash of the publicly released numbers.

Call it hacking Wall Street's own hype cycle. Tech companies and VCs have long pretended that the public markets have little direct correlation to the startup world, and that trying to “time the markets” for an IPO is a fool’s errand. After all, any company is going to be public for a long time. The IPO -- while exciting and all -- is just the first step on that journey. Plenty of huge spikes flame out, and both Google and Facebook initially disappointed. Better to have a story that can go in any market than to try to play games, startups and VCs have always said.

But now that they can, the temptation is just too great. Why rely on just a great story when you can actually time the market and have a great story? Of course, this trend will get more pronounced the better IPOs perform using this playbook.

Pushed to an extreme, though, it could have negative consequences. Hot IPO days aren't all great. Companies give up a lot of the proceeds with too good of a pop, and employees start mentally spending that paper money that can't be cashed out for months.

But the trend is too nascent for those concerns just yet. For now, back to Box's fundamentals. In the run up to this listing, Box has been the subject of acquisition rumors, with HP cited as an interested buyer. Given how imminent an IPO now appears, it seems that those rumors were either flat wrong or greatly exaggerated. Most market observers project that Box will price in the $5 billion to $7 billion range when all is said and done. That being the case, HP likely would have had to make an offer of $10 billion or more to catch Levie and his investors’ attention this late in the game. If anything, Box might as well go public and then field acquisition offers from interested suitors once the market has spoken as to its valuation.

It sounded like an unlikely scenario at the time, and we’ve seen nothing to change our mind in the ensuing weeks. HP is only valued at $60 billion today, meaning that a eleven-figure deal would represent more than 17 percent of the company – a monstrous bet by any measure. And it’s not like HP CEO Meg Whitman has a great track record with mega acquisitions to fall back on. EBay’s Skype deal, for example, was an utter bust. HP’s track record is equally spotty, including big whiffs with Autonomy and Palm, but a solid outcome from its Compaq deal.

Also, given the warchest Box has raised, Levie doesn't have the mega stakes that we've seen from founders in the Facebook, LinkedIn, and Twitter IPOs. That means he's personally more incentivized to go huge, which unless you are WhatsApp, means going public.

When it comes to ownership, Box's VCs are heavy at the top. Going into the offering, Draper Fisher Jurveston owns a whopping 25.5 percent of the company, making it the big winner with a stake likely worth upwards of $2 billion dollars. Next in line is US Venture Partners, which owns 13.0 percent, General Atlantic at 8.4 percent, Scale Venture Partners at 7.5 percent, and Bessemer Venture Partners and Meritech each owning 5.6 percent and 5.1 percent respectively. Levie owns the largest individual stake at 4.1 percent, making him worth a hypothetical $205 million if Box prices at $5 billion. None of the above figures in the dilution of the upcoming IPO. Box raised a total of $414 million in the private markets, with its December 2013 $100 million Series F round reportedly commanding a $2 billion valuation

Finally, the elephant in the IPO room is the race between Box and Dropbox. While Levie is unlikely to admit it, it’s a good bet that Box is deliberately going out before its larger and arguably sexier cloud storage competitor. At a private event in Menlo Park just prior to Facebook’s IPO, Frank Quattrone called Linkedin the “John the Baptist” to Facebook’s “Jesus.” Given the anticipation of the latter, it behoves the former to go out first and bask in as much market attention as possible before all eyes are pointed elsewhere. In many ways, Box and Dropbox fit the same narrative.

Box has painstakingly built a solid company. It’s embraced the slower, heads-down and less binary route of building an enterprise company, not a consumer hit. That means it’ll likely be much smaller than its cross-Valley rival Dropbox – which is another way timing matters.

There’s a valid case to be made that Box, with its enterprise DNA, is a better business. After all, Dropbox is competing against Apple, Google, and Microsoft for consumer cloud loyalty in a price war that seems to be trending toward zero. A single Box customer is surely more valuable than a one of Dropbox’s and, given the enterprise leaning, is likely to be more loyal too. (Another arguable LinkedIn-to-Facebook parallel...)

But none of that will matter in the early days of either company’s public market debuts. Dropbox far and away the more widely known brand and is thought to be significantly larger in terms of top-line revenue and total users today. With Mr. Market prone to emotional decision-making, expect Dropbox to get the bulk of the early cloud-storage love.

Oh yeah, and it's going public on the NYSE-- or as we call it here at Pando-- the NYFSE. Box is just the latest in a long list of post-Facebook tech IPOs to choose the NYSFE. With NASDAQ royally shitting the bed on what was supposed to be the IPO of the century, founder and bankers seem reluctant to give the supposedly “technology friendly” exchange a second chance. Twitter chose the NYSE and it looks like Alibaba is poised to do the same. Add Box to the list of marquee tech names eschewing the NASDAQ and, as the saying goes, “three’s a trend.”

A few more and Nasdaq may start to regret that big Facebook "win."

This is a breaking story and we will continue to update this post with additional information.