For the past two-and-a-half weeks, I've been reporting on serious red flags around Russian-based Healbe and their near-$1m Indiegogo campaign for a watch that can allegedly count the calories in what you eat.

Medical and engineering experts have said the technology can't work, and in likely couldn't be manufactured by June as promised. Independent tests have been teased, but haven't eventuated. Indiegogo has even changed the wording of its anti-fraud guarantee in acknowledgement of the fact that, in all likelihood, the campaign is in fact... er... a scampaign.

Still Indiegogo won't take the only reasonable step to protect its users: suspend the campaign before it closes and prevent a million dollars being sent to a Russian bank account.

Now it seems that Healbe's individual Indiegogo supporters are starting to take matters in to their own hands. In the past 48 hours, the company's campaign page has filled with demands for refunds. At the time of writing almost every comment on the first two pages is a demand for a refund.

According to Indiegogo’s Terms of Use all contributions made to a campaign are non-refundable, but Healbe seems to be fulfilling the refunds from its own cash reserves. This is a risky move for Healbe -- if the campaign is suspended then they'll be out of pocket for all the refunds. But it's also a smart strategy: issuing the refunds directly and promptly prevents customers from issuing chargebacks on their payments, which would be another red flag for the campaign. It also doesn't reduce the (currently) $976,000 total shown on the campaign site, meaning there's no way to know how many refunds have been requested. It's reasonable to suppose that for every public comment asking for a refund, there might be many more requests by email or other private channels. 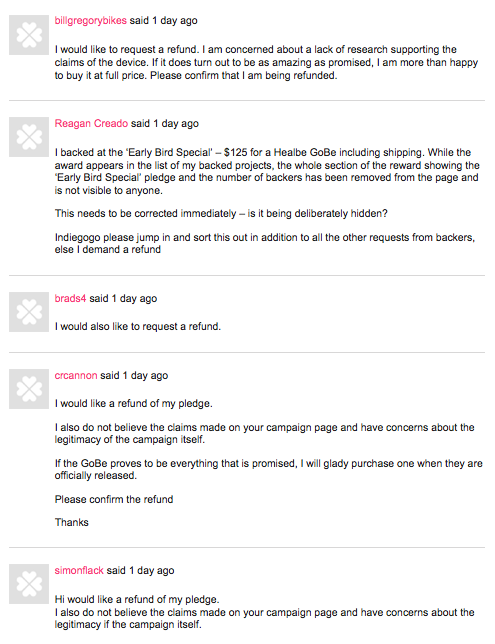 Pando has spoken to some former Healbe supporters and it seems the company has changed the way they handle refunds. Emails supplied to Pando between Healbe and former supporters show that at earlier stages of the campaign the company tried to convince people seeking refunds to wait for tests results to be released that would validate their claims as to what the GoBe could do. Now, for some reason, Healbe has stopped asking disgruntled backers to be patient, and is simply processing the refunds.

Healbe has eight days until its campaign closes, and the company is doing everything it can to suggest business as usual. With other reward levels sold out, the company has added in a new $209 support level. Interestingly the new level comes with a new estimated delivery date of July, not June.

Meghan Donovan from Healbe’s PR agency, MicroArts Creative Agency in Greenland, New Hampshire, explained only that, “Healbe has a manufacturing limit for June and is now moving into July.”

Showing newfound shakiness in its confidence in delivering its miracle to customers, the new reward level features its own disclaimer on Indiegogo: “delivery of Perk is subject to the best efforts and if not fulfilled will be refunded.”

Alongside the recent slew of refund claims, there is clear evidence on Healbe's Indiegogo page of backers growing concerned about the campaign.  A snapshot of feedback from its page there shows customers none too impressed with what they’ve found themselves supporting.

“A facebook photo of it half-hidden on your arm doesn’t really prove it works as claimed.”

“There’s pretty much no way on Earth this is real.”

“I am now skeptical of the claims made on your campaign page and have concerns about the legitimacy of the campaign itself.”

“I am concerned about a lack of research supporting the claims of the device.”

“I’m not convinced that this product will ship and the medical claims are just too over the top.”

As it enters its final, excruciating week, Healbe’s campaign has become part-slow motion car crash, part-public relations catastrophe, part story of near-sociopathic negligence by Indiegogo. One former Healbe supporter, who agreed to speak to Pando on the proviso her name wasn’t published, said “As a direct result of this campaign, I will not be using Indiegogo again. I would have expected Indiegogo to have a comment or to step in and investigate further, not to simply change their terms of service. I feel that Indiegogo have some duty of care towards their users.”

Explaining why she didn't want her name mentioned, she said "It’s embarrassing enough to have thought I had backed it, without my name also being searchable.”

At least Healbe's backers still have the chance to distance themselves gracefully from this fiasco. It'll be much harder for Indiegogo to do the same.

See here  for the latest updates on this story.