With just six days of scampaigning left to go, Indiegogo-fraudsters Healbe have launched an all-out PR assault to stem the tide of refunds.

Earlier today, Brian Blanchette, the President of MicroArts Creative Agency in New Hampshire, which reps Healbe, took to the campaign's comment section to hit back at experts who say the GoBe device is grounded in false science.

“There are a lot of people asking for refunds based on articles written by people that have not done their due diligence in investigating Healbe and it’s technology,” Blanchette wrote. “They refer to “medical experts”, are they medical experts in this field? did the writers reach out to the medical expert listed in the testing results that were posted?”

Equating Healbe with huge, established technology companies, Blanchette continued: “I am sure that Apple and Samsung, and other companies are working on new projects and products as we speak that people wouldn’t believe to be possible. I am also sure they would not turn over all of their proprietary information just because a writer demands it.”

In a third comment, Blanchette’s specifically addressed Pando: “Get on a plane fly to Russia see their facilities speak with their team, interview the medical expert that oversaw the testing, then write your article.” 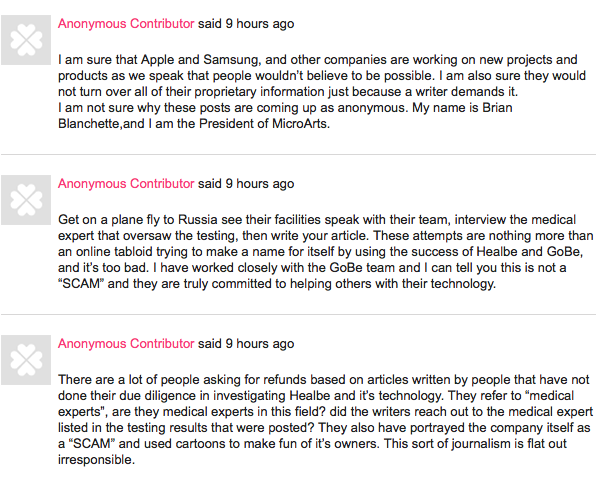 To Blanchette’s question as to whether we've spoken to Healbe's own medical expert, the answer is  yes, we have. Pando has been in written correspondence with Dr. Vladimir Leonidovich Emmanuel for several days and I’ll be writing more about our conversation later this week (spoiler: he doesn't really help Healbe's case.) Moreover, Paul Carr, my editor, offered to fly me to Russia to meet the Healbe team, but only if they agreed to allow us to test the GoBe device with an independent expert. Healbe didn’t take him up on that offer.

Blanchette followed up his Indiegogo tirade by granting an interview to TechCrunch. “We would not be working with [Healbe] if it was a scam,” Blanchette told writer Matt Burns. “It works.”

Blanchette's (possibly actionable) assurance that the Healbe works is notable for several reasons, not least because it marks a change in MicroArts’ official stance. MicroArts’ Meghan Donovan had previously told Pando that Healbe CEO Artem Shipitsyn had visited their office in January to film their Indiegogo video and bought two models of the GoBe with him. But Donovan said that MicroArts had not actually seen the device working. Donovan also declined to answer to questions about what due diligence MicroArts had done themselves into the science behind the GoBe device.

Blanchette now says that MicroArts has seen the device in action, and explains the company’s unwillingness to submit their device for independent review by saying that Healbe doesn’t have enough prototypes of the Healbe to go around.

I called Blanchette today to ask about the change in position but a staffer told me he was in a meeting and could not come to the phone. Later by email Blanchette wrote, “I would prefer not to subject myself or MicroArts to what I feel would be an unfair representation of us and the facts around Healbe.”

Another interesting development today, coinciding with Healbe’s PR offensive, is a flurry of similarly worded comments appearing on Pando and Indiegogo, dismissing concerns around the campaign. 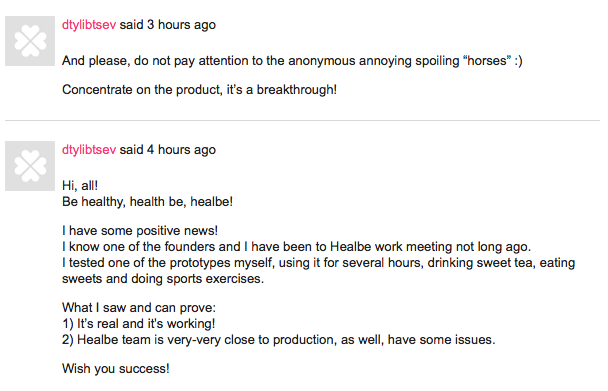 There’s no way to know if the commenters above -- none of whom, it should be noted, has ever commented on an Indiegogo campaign prior to Healbe -- are legitimate, or part of MicroArt’s PR counter-offensive. I'm also not entirely sure what "annoying spoiling horses" are.

The only thing we do know is that, with less than a week to go before the offer closes, the last minute PR drive doesn’t seem to have altered things much one way or another: floods of former Healbe backers continue to tell Pando they’ve demanded refunds,  press coverage continues to be almost universally critical of the company (even the otherwise credulous TechCrunch admits the campaign "looks fishy")… and, of course, Indiegogo refuses to pull the plug on Healbe.

See here  for the latest updates on this story.