Truth lets teens send anonymous SMS to each other, for good or ill

Are we burnt out on anonymous apps yet?

Nope. VC's and entrepreneurs are just getting started. The latest foray into the craze comes from a few Canadian first time founders with a messaging app called Truth. Users can text anyone on their contacts list without the recipient knowing who sent them the SMS.

The land grabs have already happened, with $10 million invested in Secret, $54 million in Whisper, a reported $800,000 in Rumr, $6.35 million in Lulu, and those are only a few. Saheli is claiming there’s been inbound investor interest for Truth — he’s heading down to the Valley soon to fundraise — but there’s no way to fact-check such claims.

Of course, Truth does have its own value add to set it apart from the other anonymity apps. Secret took off in part because it made one slight tweak from Whisper — showing you secrets your friends and friends of friends have posted instead of just the masses.

Truth’s value add is that it allows you to send anonymous messages to specific people. The sender knows who is getting them but the receiver doesn’t know who sent them.

As you can imagine, the list of cyberbullying implications for such an app is neverending. In fact, Michael Carney explored them all in detail back in the early days of Rumr, when Rumr’s premise was an anonymous messaging app exactly like Truth. Carney said:

Rumr appears more like a digital sniper’s rifle, that in the wrong hands could be wielded to cause acute pain and suffering…We’ve seen enough of the Web to know that when people can be anonymous, hate follows.

He was writing the story before Rumr had launched to the public, and the company decided to change the product at the last second. It turned the app into anonymous group chatting, where you could see everyone in the chat but couldn’t pin down who said what.

It doesn’t bode well for Truth that the makers of Rumr pivoted at the last second from the Truth messaging model. They aren’t the only ones. The idea for Secret was originally an anonymous direct messaging app, Secret’s co-founders David Byttow and Chrys Bader-Wechseler told me.

But they eventually realized there wasn’t an everyday use case for sending anonymous messages to direct friends. Broadcasting anonymously to friends, friends of friends, and the masses, on the other hand? That’s far more frequent.

“We had an existential crisis, ‘What are we doing?’” David remembers. “Ultimately you have to surrender to it and try new things.”

“We made the right decision to pull it,” Chris agrees.

“We were crushed for a day when we realized anonymous messaging like this was great, but like any true super power it could be used for evil.”

It just goes to show that startups in Silicon Valley are a little bit like Zombies. When one dies or pivots another grows to take its nearly identical place. Just because one company is put off from pursuing an idea because it won’t grow fast enough or could be “a superpower used for evil” doesn’t mean there’s not another founder waiting right around the corner to give the same idea another go.

Saheli says he’s anticipated the potential evilness and built in workarounds, like the ability to block or report an SMS bully. That may not be enough to combat harassment, however. From what I remember of high school, clicks of teens know to tag team a victim, bullying the person from all sides. A Truth user could block one anonymous messager only to be flooded by others.

Cyberbullying aside, can Truth do well so late in the anonymous fad game? Well, that’s what’s surprising about it. It doesn’t appear the masses are as tired of anonymity as the tech press is. Truth crept up the list of most popular social networking apps in the app store, nearing Secret in the US and passing it in Canada. Co-founder Saheli says its seeing ten to fifteen percent user growth every day. 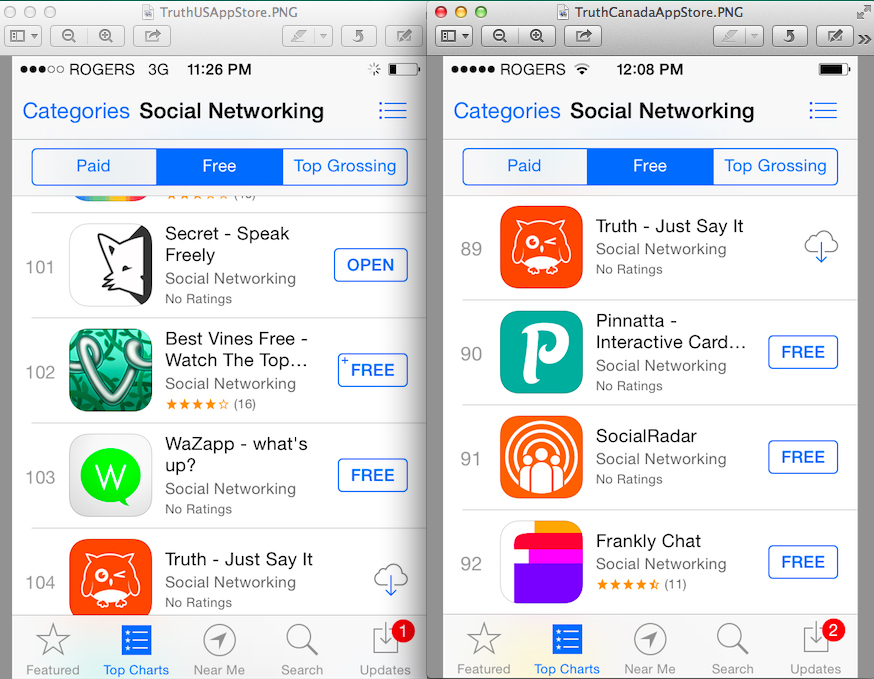 When someone sends an anonymous SMS to a contact who hasn’t downloaded the app, the recipient gets the first half of the message with a prompt to download the app to see the second half of the text.

“It’s been growing through word of mouth in high schools and colleges,” Saheli says. “Younger people are curious to see what someone says to them.”

It’s too early to tell whether anonymity is a fad that will die out quickly ala Chat Roulette or a phase like Facebook that will transform communication for a period of time. Fred Wilson has his bet on phase. It’s also too early to know whether these apps are monetizable, but Bill Gurley sure doesn’t think so.

In the meanwhile, before all the chips fall and VCs regret or crow about chucking money at this trend, Truth will try to carve out its own little space in the dark masses.