The following is excerpted with permission from The Lean Enterprise: How Corporations Can Innovate Like Startups, by Trevor Owens and Obie Fernandez.

Enterprises are in Peril.

The need for enterprises to innovate has never been more acute. Many established brands are on the ropes.

American Airlines was valued at just $5.5 billion at the time it merged with US Airways in 2013. Kodak, a name synonymous with photography for more than a century, retreated into bankruptcy in 2012, with its arch competitor Olympus close behind. Suzuki’s automotive division fled the United States the same year, and Volvo appears to be approaching the off ramp. Two cornerstones of the PC industry, HP and Dell (which sold itself for $24 billion in early 2013), are struggling to build a bridge to the post-PC future. BlackBerry’s worth has slid to a few billion since it tripped over the very smartphone market it pioneered. Blockbuster has shut down its storefronts and DVD-by-mail services. The death rattles of Radio Shack and JCPenney speak volumes about the challenges in retailing.

The threat to established firms across different industries is pervasive. Of the names listed in the Fortune 500 in 1955, nearly 87 percent have either gone bankrupt, merged, reverted to private ownership, or lost enough gross revenue to fall off the list. A study of the S&P 500, which ranks companies by market capitalization, found that its constituents averaged 61 years on the list in 1958 but only 18 years in 2012.

Contrast the turmoil in the enterprise world with value creation among the world’s most valuable companies as of January 2014. Apple is worth $436.55 billion after three and a half decades in business, a beacon of market-disrupting prowess. Google, less than half that age, is valued at $395.42 billion. Amazon has a market cap of $165.79 billion. Facebook’s initial public offering (IPO) was a notorious fiasco, but the 10-year-old company is still worth $164.00 billion and rising. Twitter, founded eight years ago, is already worth $29.60 billion.

Alternatively, consider the fastest-growing companies coming out of the startup crucibles of Silicon Valley and New York. Dropbox, Pinterest, Snapchat, and Uber have accrued valuations approaching $14 billion in a few short years. Newer arrivals such as Airbnb, Evernote, MobileIron, PureStorage, Marketo, Spotify, SurveyMonkey, Violin Memory, and Zscaler are worth more than $1 billion each. In fact, the number of billion-dollar startups is estimated to be as high as 40. These companies are creating value at an unprecedented rate and on a historic scale. 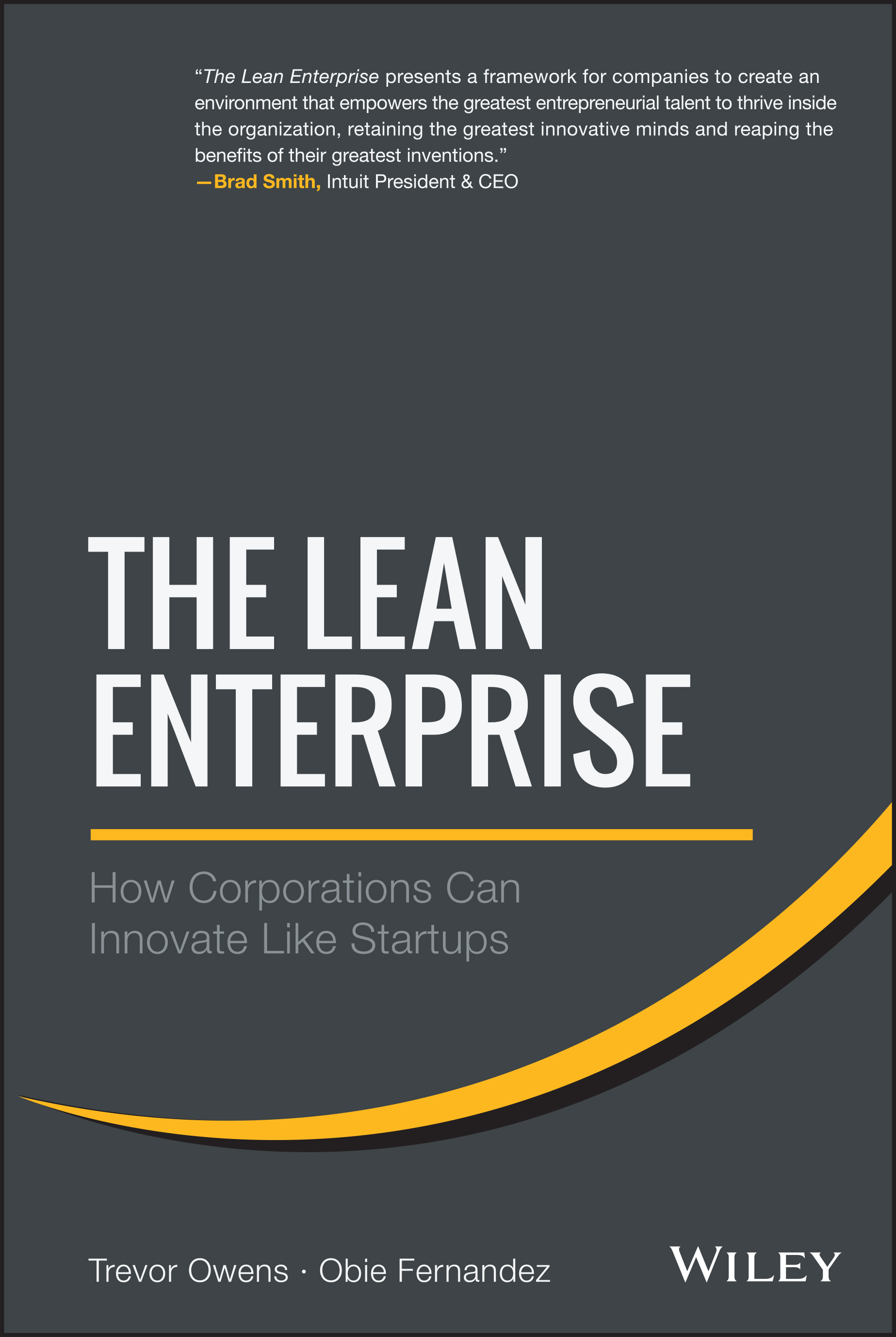 The difference between stagnant enterprises and their fast-growing counterparts is no secret: These emblems of growth have an uncanny ability to bring to market exciting products and services and open vast new markets. High-flying corporations like Amazon and Facebook have proven that big companies can do it. But for lessons in how, the best place to look is startups.

If the present is a dark time for established companies, it’s a golden age for new ventures.

All of which has dulled the appeal of even the biggest enterprise brand names. For bright business- and technology-minded college grads, it’s no longer cool to work for a blue-chip corporation. In general, millennials reject the traditional comforts of management hierarchy, financial stability, risk aversion, and buttoned-down culture. They want to work at Airbnb, Dropbox, FourSquare, or Tumblr—or launch their own bid to rule the infosphere.

And, for the first time, it’s clear how to do it. Over the past decade, what was a wilderness trail to starting a high-growth business has become a well-worn path. Students can study entrepreneurship in school, read up on the scene in TechCrunch, VentureBeat, or Xconomy, attend meetups for like-minded aspirants, get a job at a hot startup, draw up a business plan, and start pitching VCs.

More important, the cost of starting a company has fallen through the floor. Many fixed costs have evaporated, replaced by variable costs. For instance, Amazon Web Services gives aspiring entrepreneurs access to data center infrastructure, and it costs nothing until customers start showing up en masse. Freelance communities such as Crowdspring, Mechanical Turk, Odesk, and Elance can handle odd jobs from programming to design to writing press releases. Coworking spaces provide cost-effective offices where startup founders can congregate and support one another until they have sufficient revenue to rent a proper office. Capital has become more accessible as well, thanks to crowdfunding sites such as Kickstarter, seed-funding communities like AngelList, and new laws that allow almost anyone to buy and sell equity.

All these trends boost the level of competition with an enterprise’s established business units as well as the possibility that they’ll be blindsided by unforeseen market shifts. A new generation of highly empowered entrepreneurs is coming up fast. They have the means, motive, and opportunity to disrupt your business, and they’re out to do just that.

Hidebound enterprises don’t start out that way. As Clayton Christensen pointed out in his classic 1997 business manual, The Innovator’s Dilemma, most large companies begin as innovators who unseat powerful incumbents by leveraging cheap technology to deliver good-enough capabilities at a lower price. The dilemma arises once they’ve ascended to dominance.

At this point, they have a market to protect, and their original focus on disruptive innovation shifts to sustaining innovation that bolsters their legacy business. Now exploiting a mature market, they can look forward to decreasing growth. Ultimately, a new competitor emerges that undermines their business with a cheaper alternative. By failing to develop disruptive technologies first, they leave themselves vulnerable.

Indeed, overcoming inertia has become a do-or-die priority for large organizations. Enterprise CEOs must fend off ever more rapid technological shifts and ever more aggressive competitors. Christensen’s manual was the first of what has become a flood of books, conferences, workshops, and blogs devoted to the topic, and executives have embraced them in search of a solution. Corporate innovation has become a rallying cry and a budget line item.

The key challenge is resource dependence: the fact that organizations rely on external parties for their survival. Securing these resources implicitly becomes the enterprise’s highest priority, regardless of explicit mandates handed down by management. Their suppliers, investors, and especially customers exert a magnetic pull toward established lines of business. This tendency to stay on familiar territory is a strong barrier to innovation.

We see the influence of resource dependence frequently in our work. Would-be enterprise innovators are staring a substantial opportunity in the face but feel compelled to ask themselves, “How does this fit into our business model? Does it suit our brand? Are we good at it?” These questions are deadly to innovation. The company’s values, competencies, and processes are huge advantages in continuing to do what it already does, but they make it nearly impossible to open new territory.

Dawn of the Lean Enterprise

Enterprises are in a tough bind, but our lean enterprise approach offers powerful new tools that can turn companies focused on protecting old markets into masters of discovering and mining new ones.

Innovative companies gain fringe benefits as well. Being perceived as a leader generates a halo effect that can raise the company’s public profile and internal morale. This can be a boon to employee retention and recruiting. Establishing an entrepreneurial path within the enterprise attracts not only internal candidates who have ambitions beyond their current job but also outside talent that appreciates the strengths an established company can bring to a new venture; they can live the dream in a more comfortable and stable environment. And developing contacts in the world of startups and seed-stage investors gives the company early warning of emerging trends and business models.

And the impact extends well beyond the company’s walls. Today, people who feel an entrepreneurial urge must choose between holding a conventional job and putting their livelihood on the line, subsisting on ramen, and sleeping on the couches of indulgent friends. The lean enterprise offers a third way: They can share the risk with an organization that has been architected to maximize their chance of success. This approach provides a path for would-be entrepreneurs who don’t have the means or personality to found a startup on their own, but who may have valuable ideas, talents, and skills. It makes far more efficient use of the entrepreneurial spirit that permeates society at large.