By failing women, Tinder is really just failing itself

There was a hilarious women-on-the-Internet empowerment story that went viral last week, the kind that makes a feminist say “fuck yeah!” Or at least, it made this feminist say that in her head.

A female artist named Anna Gensler became fed up with the demeaning, gross things that men would say to her on Tinder. So, she decided to get revenge using her illustrative skill set, drawing said men naked, chubby, and with flaccid penises next to their terrible pick-up lines. She’d post the pictures on Instagram and send the links to the offending fellas. Then she’d post the followup Tinder conversations alongside the drawings. Eventually she moved onto OkCupid and did the same there.

For anyone feeling a bit of pity for these men, don’t. Some of their choice phrases include – apologies in advance for the offensive language – “There’s only going to be 8 planets left after I destroy Uranus” and “I wanna tongue punch you in the fart box.” In followup discussions, their reactions to the art ranged from sexist, paltry excuses like, “men wanting women is the whole reason you’re alive and it’s nature,” to a sheer perseverance to get the prize, “But for real though, you tryna get the pipe?” 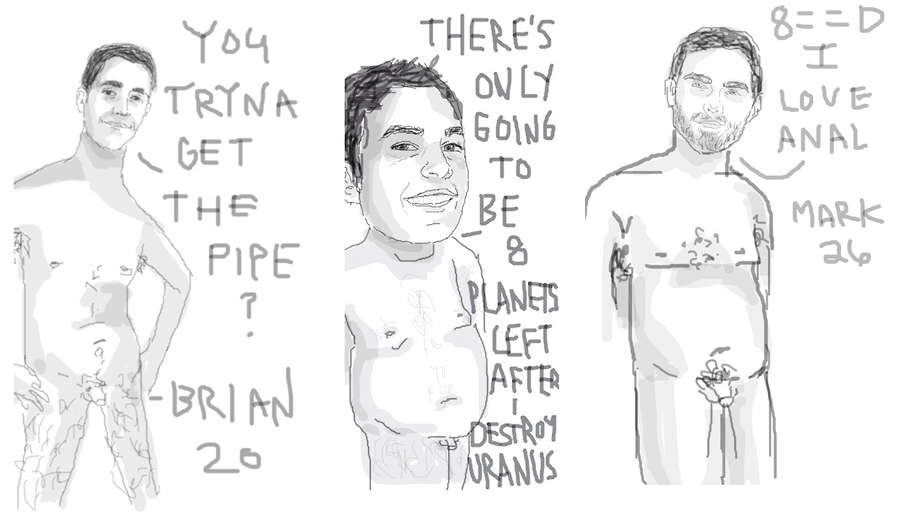 As artist Gensler said it “give[s] them a taste of their own medicine.”

But in conversations with a male friend of mine, I was surprised to learn he felt very differently. He thought the artist wasn’t being fair to her Tinder victims, that “it’s not playing by the rules,” and that if she didn’t like such objectification, she should just get off the platform. After all, as he put it, “It’s the [Tinder] medium to get people to drop this wall and encourage and facilitate random encounters.”

The argument shed light for me on why, exactly, men feel so comfortable being so creepy and terrible online. For the record, my friend is not a creepy and terrible person. He’s the kind of nice guy who would never hit on a woman in this manner. But from the perch of being a male, he saw the situation entirely differently from me.

He has a point. If a medium like Tinder is geared towards objectification, with its lack of biographical information and focus on visual appearance, perhaps it strips down even further the barriers to sexual harassment. It makes it seem to at least some users that such harassment is completely acceptable, and, in fact, is the purpose for which the technology was created. The way the app is built just propagates and amplifies behavior that occurs on other dating sites — and in the physical world. If a person doesn't like it, they can get off the site.

But in an age where online dating has become far more mainstream, with a third of new marriages reportedly meeting through such platforms, that’s not an acceptable solution. To me, that seems like an obvious point rooted in common sense, although my conversation with my male friend proved otherwise.

These are platforms for new romantic and sexual opportunities and connections, just like LinkedIn is a platform for new professional connections. It's an important aspect of many people's lives, and women (and well-mannered men, for that matter) should be able to use the technology without wanting to go crawl into a cave because of the disgusting things some users say to them.

Gensler’s funny revenge comes soon after the publishing of a tome of impressive reporting by Amanda Hess, on women getting harassed on the Internet. In the 7,000 word article, Hess explores the stories of women who have been threatened with rape, murder, and physical violence online – harassment without a solution because online platforms and local law enforcement denied responsibility for protecting them. Sometimes the online threats turn into offline action, with, “five percent of women who used the Internet [saying] ‘something happened online’ that led them into ‘physical danger.’”

Tinder needs to pay closer attention to the experiences of populations on its platform who might be suffering such harassment. Blocking a user isn’t enough. Said user just goes on to harass someone else, and as Gensler’s experience shows, another person will just appear to restart the harassment cycle. Over time, it becomes a rather uncomfortable environment in which to exist.

A man reportedly discovered as much recently when he decided to “prove how easy women have it on dating sites” by creating a fake female profile and racking up messages. Or at least, this is the story he told on Reddit. He used an attractive female friend’s pictures and started chatting with other guys. What started out as a joke supposedly turned dark for him rather quickly. He said:

All of the conversations kind of get weird. One of the guys becomes super aggressive saying he is competitive and he will treat me right...Then I got the NoStringsAtttached messages, with multiple guys sending me messages asking me to watch them cam, or meeting up with them within the hour, or talk with them on the phone or cyber. I would say no and they usually didn't take it too well…I would be lying if I said it didn't get to me. I thought it would be some fun thing, something where I would do it and worse case scenario say "lol I was a guy I trolle you lulz"etc. but within a 2 hour span it got me really down and I was feeling really uncomfortable with everything.

For dating platforms, providing better tools for mitigating and stopping such behavior — like kicking users off the site entirely if bad behavior is flagged — isn’t just an ethical thing to do. It’s a better business practice. If women are the ones in high demand on these sites, why not make online dating a more welcoming place for women by putting protections in place for them? Not everyone has the artistic skills of Gensler to fight back. Some might just choose to stop engaging. Then, from a business perspective, you have a supply problem.

Gensler’s Instagram experiment isn’t the first of its kind to test the limits of men’s terrible behavior in online dating. In January, a woman named Alli Reed decided to see what would happen if she posed as “the Worst Woman on Earth” but had attractive photos. Could she repel men from wanting to sext her? “Maybe there was a woman so awful, so toxic, so irredeemably unlikeable that no one would message her, or if they did, at least they would realize they never, ever wanted to meet her,” Reed hoped.

The answer turned out to be no. No matter what she did, from claiming her best skill was “convincing people im pregnat lol” to saying she didn’t like sex and thought it should just be used “as a weapon,” the fellas kept asking to meet her in person. She concluded her post with a rather dry observation, “Men of the world: You are better than this.”

I have a different conclusion. Tinders of the world: You are better than this.

[Art for Pando by Brad Jonas]