Adventures in making: You too can 3D print your own head!

Writing about 3D printing and seeing the machines up close, it is hard to appreciate on a practical level the potential the machines have to replicate things from the real world, or the exacting detail to which this is possible. Even more so, is the realization of just how close this sits to being within reach of a regular person, not just hardware nerds.

To rectify this, I wanted to see something made. An idea was put forward and Autodesk accepted the challenge; I was going to get a 3D model made of my own head.

Autodesk’s 27,000 square foot facility on Pier 9 on the Embarcadero serves as a sort of idea factory for the company. It produces the software that helps people make things. I’ve heard CEO Carl Bass say before that Pier 9 bridges the gap between itself and the people it serves with its products.

The building houses Autodesk’s consumer products group, but has vast stacks of machinery for different company employees and artists-in-residence to tool around with. This includes, 3D printers, metal and wood shop,s and a mass of rapid-prototyping machines. Carl Bass is making a go-kart that is nearing completion. Particularly awe inducing is a massive water jet, which can cut through metal with a high-powered, yet precise stream.

Christian Pramuk is a product manager at Autodesk. Pramuk has the air of a low-key, contented tinkerer and his desk is lined with his own product experiments as he studies how to improve the product. As a former movie effects editor (he says his claim to fame was working on the JJ Abrams film Super 8), one of the products in his wheelhouse is 123D Catch, which helps turn everyday photographs into 3D models. 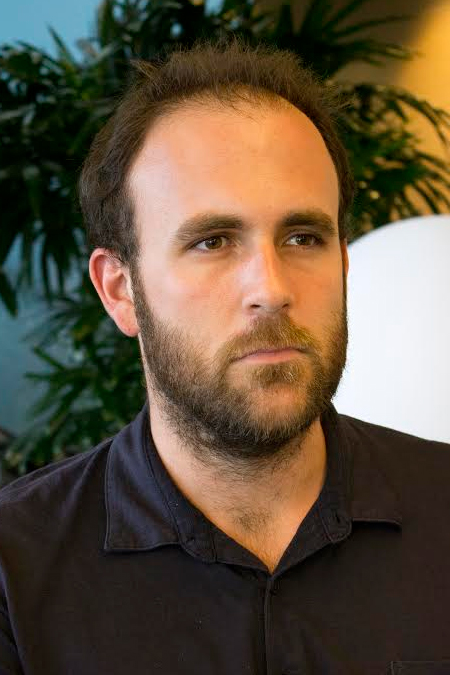 It’s part of the wider family of free Autodesk 123D apps that are used by 7 million people already. The 123D apps are offered to introduce people to the concept of 3D design, where more serious products that Tinkercad are for more seasoned design pros, Pramuk explains. Many of these everyday users tinker around with 123D Catch purely for the fun of it, but never print, Pramuk says. As a result, the collected 123D online gallery has over 15 million images in it.

The first step of this process involves me sitting for 30 photos as Pramuk takes shots of my head from every angle. These photos are taken at a resolution of 8 megapixels using 123D Catch, and subsequently uploaded into the cloud and broken down into 240 million individual pixels of information that can be analyzed to develop a 3D scan of my head.

Throughout this photo shoot I have to be motionless, to avoid any blur or distortion in the finished product. I fix my eyes on a point in the distance and do my best not to move. My mouth must remain firmly closed. Pramuk tells me that I need to try and only blink in between his photos. Of course, staying still and not blinking is easy when you’re unaware, but excruciating when it is all you can think about. I find myself blinking robotically between the clicks of the camera. It feels odd. 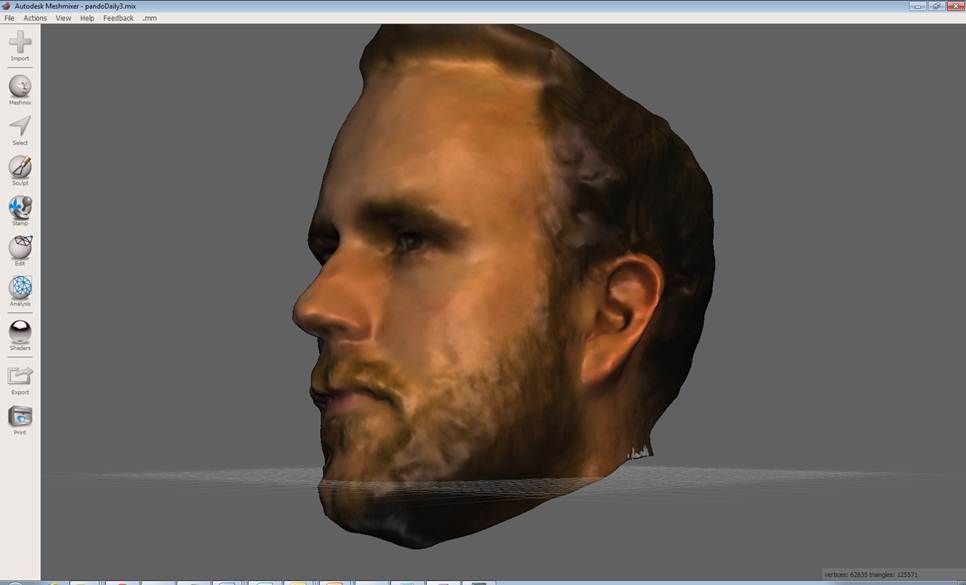 Two weeks later the scan arrives in my inbox. It looks like a bronzed, motionless version of me, like I’ve been decapitated, painted and then frozen. It sits in that uncanny valley between being so very, very close to photographic, but somehow inhuman. My intense focus on not moving or getting photographed with my eyes closed has turned out for the better. The scanned version of my likeness has a poised, purposeful look, the sort of philosophical thousand-yard stare I’ve always hoped I could pull off as an actual, human person but never could. 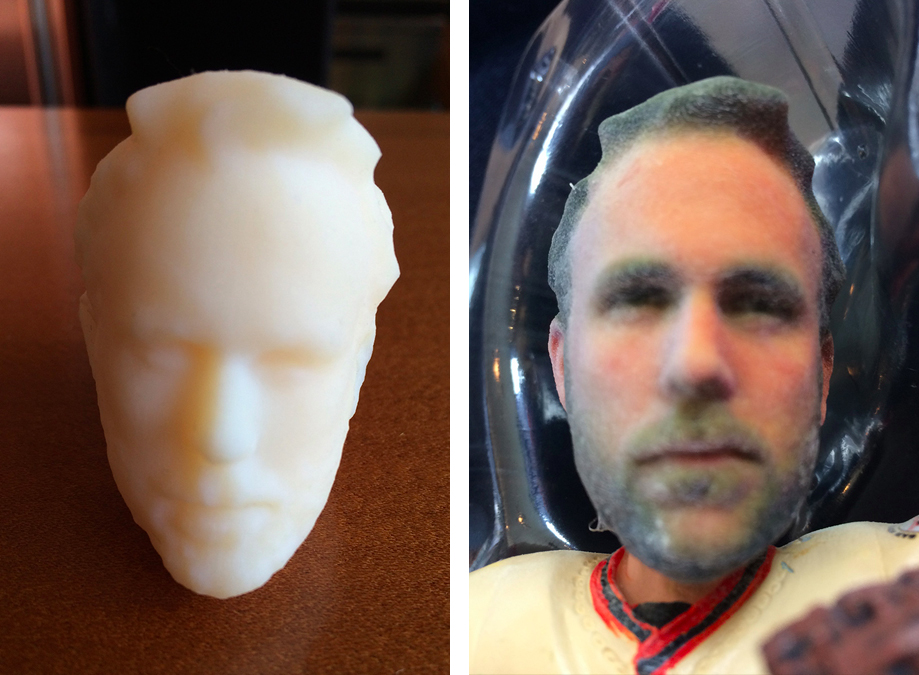 The following week I’m back at pier 9 to pick up my physical models. There are two versions. The first is an unpainted model, still on the tray of the 3D printer bed and laying next to two other 3D printed pieces. Pramuk picks it up and takes it away to waterblast excess material away. “We have to leave the other two bits here," he says. "Buzz Aldrin is coming to pick them up later." 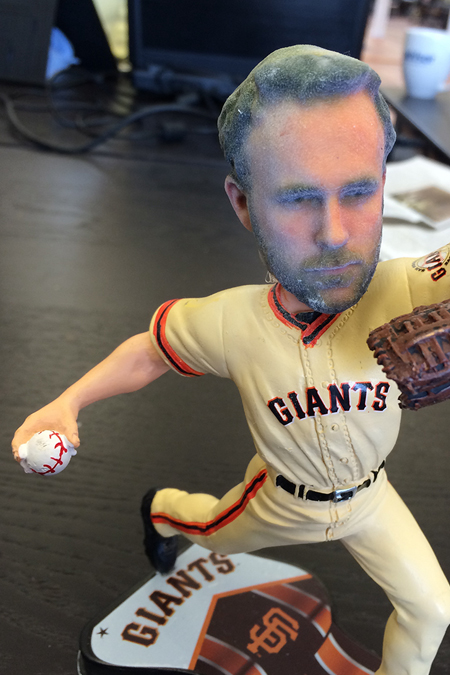 Pramuk has placed the color version on the body a Tim Lincecum, San Francisco Giants bobble head doll. That fixed, purposeful look I have attained by accident is perfect pasted onto a miniature version of Lincecum about to let a pitch fly. It gives me the serene look of a peak athlete at work. All my fantasies of being a sports superstar – foiled, sadly by my general un-coordination and lackluster physical fitness – have come true.

The unpainted model of my face looks a little like marble and gives me the appearance of a Greek statue. It's ego gratifying, so say the least.

Looking at the small, colored-in model of my face I find myself more aware of what it is like for other people to look at me. I find myself intensely self-conscious of the contours of the back of my head. Showing it off to friends and co-workers there is an even mix of terror and intense curiosity.

The bobble head doll currently resides on my kitchen table, dead center, one of the first things I see and salute when I get home each day. It’s a sublimely eery thing to look at, because it is not an artist’s interpretation, but a small replication of my own visage. Designed simply with a free smartphone app, utilizing remote cloud processing power. Of course I got a big assist from Autodesk’s fancy 3D printing tools. But a similar project is utterly approachable for anyone else, who could, say, send the design out to a 3D printer to get it made.

Some days, the future feels a lot like a carnival.