Baker responded to our report by telling the Boston Globe that, contrary to previous assertions by General Catalyst and Baker himself, that he was never actually employed by the company, nor did he have an active role in setting investment strategy. A spokesperson told Pando “Charlie is in fact not an executive or employee of General Catalyst.” Baker has also tried to dismiss questions about the pay to play rules by suggesting that he merely made an error in listing himself on one New Jersey campaign document as a partner in the firm.

Now, however, Pando has discovered 33 separate campaign donation records between 2011 and 2013 that appear to show Baker affirming his status as an employee of General Catalyst. Those employer listings, which appear in conjunction with $45,400 worth of campaign donations by Baker, are typically made by the donor themselves.

Baker's employment status at General Catalyst Partners is significant because of federal and state pay to play rules. Those rules aim to prevent campaign contributions to state parties and state politicians from people associated with firms that do business with New Jersey's pension fund. As Pando exclusively reported on a Friday, Baker is listed as a General Catalyst partner on campaign records documenting a $10,000 contribution to the New Jersey Republican State Committee just months before the Christie administration awarded an eight-figure pension investment management contract to General Catalyst. Baker has also hosted a major fundraiser for Christie and is politically close to the New Jersey governor, who appoints the head of the pension board that awards contracts.

Responding to the newly emerged documents, a spokesperson for General Catalyst, David Fialkow, asserted to Pando that despite the firm’s website listing Baker as a partner and executive in residence, and despite Baker being repeatedly listed as an employee on state and federal campaign finance documents, "Charlie has never been a partner or an employee of General Catalyst.” Fialkow then referred questions about how Baker is listed on campaign reports to Baker himself.

In an emailed statement, Baker’s spokesman Tim Buckley said: "Charlie made a mistake when completing these donation forms. He should have listed himself as being self-employed, not employed by General Catalyst. In spite of these reporting errors, these are permitted contributions." Buckley previously also said that Baker listing himself as a “partner” in the firm was an error, despite General Catalyst’s website listing him as a partner.

Speaking to the Boston Globe, Baker insisted that General Catalyst's lawyers had determined there was no impropriety...

“Catalyst has very expensive lawyers they pay a lot of money to figure out who can and who can’t,” Baker replied. “They have policies in place with respect to this stuff. And their interpretation and their standards with respect to all this clearly indicate that I’m not considered to be a person for whom those rules apply,” he said.

Others were less convinced.

“Somebody is playing fast and loose with title of employer,” said former Federal Election Commission General Counsel Larry Noble, who is now of counsel at the nonpartisan Campaign Legal Center. “He’s holding himself out as being employed by General Catalyst when he makes a contribution and he is giving General Catalyst credit for his political contributions.”

New Jersey Division of Investment rules prohibit the state from giving pension contracts to firms if contributions to New Jersey state parties are made from "any investment management professional associated with” said firm. Noble said: “(Baker) is clearly holding himself out as being associated with the firm. He is listing General Catalyst as his employer, which certainly suggests an association.”

Public Citizen’s Craig Holman, who lobbied for New Jersey’s original pay to play law, told Pando: “It is not enough for Mr. Baker to say it is just a mistake. He’s either falsified campaign documents, or is subject to the pay to play laws. If Mr. Baker wants to contest this, at this point it has to be in the court of a prosecutor... If he wants to claim some legal technicality that he didn’t count as employee, that requires a full investigation complete with subpoenas of the employees of the company to determine what role he did play. It appears that it should be in the hands of prosecutor.”

Former Assistant U.S. Attorney Melanie Sloan, now at Citizens for Responsibility and Ethics in Washington, said: "In light of all these contradictory statements about his status as an employee, the New Jersey Attorney General needs to launch an investigation, especially given that this is exactly what the pay to play rules are designed to prevent." She added that "it is notable that when previous news reports said Baker worked at General Catalyst, neither Baker nor the firm denied that or corrected that, and in fact Baker was allowed to continue saying the firm was his employer for years."

Meredith McGehee, the policy director of the Campaign Legal Center, told Pando that if regulators “decide to take a look at the situation and this guy is misidentifying his employer, he could be subject to fines from the FEC.”

What the disclosure forms say about Baker’s employer

According to data from the The Massachusetts Office of Campaign and Political Finance, General Catalyst is listed as Baker’s employer on 24 separate Massachusetts campaign contribution disclosure forms from 2011 to 2013. According to Federal Election Commission records, Baker is listed as an employee of General Catalyst on eight separate campaign contribution disclosure forms in roughly the same time period. 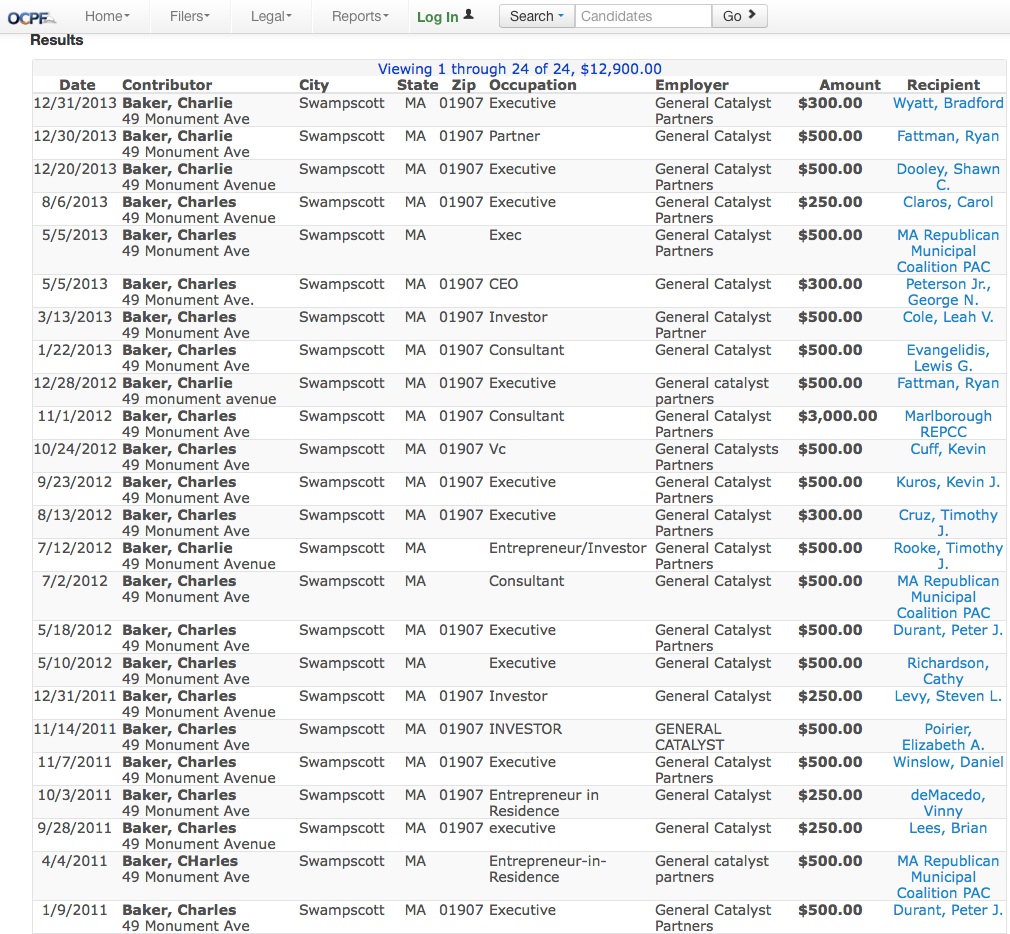 Those campaign records document a total of $35,400 in campaign contributions on top of the $10,000 contribution Baker made to the New Jersey Republican State Committee.

Peter Sturges, a former general counsel to Massachusetts Office of Campaign and Political Finance and a former executive director of the Massachusetts Ethics Commission, noted that the information on campaign reports are usually provided from the donor in question - in this case, Charlie Baker.

“Typically, the campaign committee requests the employer and occupation information and they are required to make that request, and then to report it if it is provided and typically what you see on the campaign report is the information given by the contributor,” Sturges said.

What the disclosure forms say about Baker’s occupation

On top of Baker insisting he is not an employee at General Catalyst, he has also argued that he is not an executive or an investment professional. As the Boston Globe reported, this argument aims to suggest "that he is exempt from the strict federal and New Jersey 'pay to play' security regulations."

Additionally, the Boston Globe noted that at the very moment Baker was denying he's an investment professional in response to Pando's story, Baker was "on his way back from Texas, where he said he had been attending to General Catalyst health care investments." That story also noted that Baker "said his role is to seek out companies that his firm (General Catalyst) will invest in." That follows an 2013 Boston Globe report noting that Baker "has done three deals in three years” for General Catalyst. Meanwhile, Baker's campaign told Boston magazine that his job is "to work with the firm to identify potential investment opportunities."

When presented with the details of how Baker’s new statements about his [status] contrast with his employer listings on campaign reports, McGehee of the Campaign Legal Center told Pando “There needs to be a pretty clear public disclosure on his part as to why he was originally listed [with General Catalyst as his employer] and why that is in error, otherwise the [campaign finance reports] should be taken at face value.”

"Clearly, there is an incentive for him to deny his employment connection with General Catalyst because of the pay to play laws. Given that there are records filed that someone signed that indicated that he was an employee, he would have to have the burden on him to demonstrate why he should not been listed (as an employee), otherwise he should be subjected to the pay to play laws.

Why on both state and federal reports is he listed in both places as an employee? Because obviously he has given a consistent impression to these candidates and campaigns that he is indeed associated with the firm. The burden is on him to demonstrate why these errors have been made repeatedly.

Let’s say he didn’t list (General Catalyst) as his employer and it turned out he was working for them - you would say he’s hiding who he is working for. In this case he is listed (as an employee on campaign reports), and now once they want to get a contract he’s saying darn, I wish I wasn’t listed." In reference to the Baker’s contribution coming only a few months before the New Jersey pension contract, Heather Taylor of the New Jersey Citizens Campaign said: "The fact pattern is troubling and it doesn't pass the smell test. The treasury needs to take a hard look and see if there was an effort to circumvent the state pay to play law."