Ecommerce success is largely binary. Given the enormous costs and operational challenges of building a successful online retail business, startups in this category typically either grow exponentially or quickly wither on the vine. It’s simply too costly to maintain a ecommerce business that isn’t finding meaningful traction.

It appears that Culver City-based Pickwick & Weller, which designs and sells its own line of custom T-shirts and featured Ashton Kutcher as a "celebrity co-founder," is the latest example of a company that found the task of building an online brand more than it bargained for. The company had raised $4 million from SV Angel, Baseline Ventures, Felicis Ventures, Mousse Partners, Forerunner Ventures, Morgenthaler Ventures, David Gilboa, Nellie Levchin, Max Levchin, and Ashton Kutcher.

“Pickwick & Weller is taking an extended staycation so we can come back with the best t-shirt. Ever.” 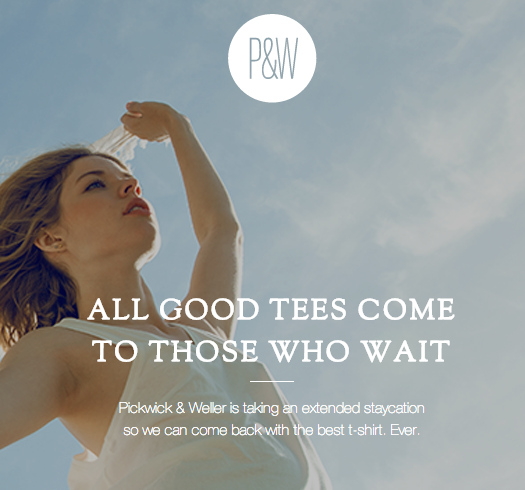 But founder Ryan Donahue confirms to Pando that this is in fact a wind down, not a retooling. All discussions of a potential acquihire or asset sale ran their course without any viable offers, Donahue admits. The founder and some members of his six person team have taken new jobs – several of them at newly IPO’d ZenDesk.

“We had a hard conversation with our board and investors, and we mutually agreed that we gave it a good shot and it’s time to move on,” Donahue says. “We built a good brand and a great product, with loyal customers, but where we really struggled was in unlocking healthy enough customer acquisition to scale it to a point where it made sense. We simply ran out of time and runway.”

Forerunner's Kirsten Green echoed those sentiments, telling Pando, "We did nearly $1 million in sales the first year we were in business and our customer retention rates were higher than most companies I work with, so something was resonating with their core audience. But when it comes down to it, we didn’t feel like we had demonstrated enough to go out and raise a big chunk of money. Series A bars are always moving targets and we were pretty in tune with what the market’s looking for."

It’s easy to question Donahue’s assertion that the brand and product were winners, given the businesses’ failure, but Pickwick did achieve a 35 percent repeat purchase rate, suggesting that those customers who did experience the company’s product responded favorably to it. A full 80 percent of Pickwick’s customers were women, a fact that came as a surprise to Donahue and his team, who planned for and anticipated a more even split.

“We just found that the word-of-mouth was far stronger within the female demographic,” Donahue says.

At its most basic level, ecommerce is an equation between the cost of customer acquisition and the lifetime value of a customer. If a customer is worth more than the price you pay to attract them, then there’s the opportunity to build a healthy business. It’s one thing to pay to acquire customers, it’s entirely another to do so in a way that’s sustainable and makes sense. Pretending that this equation doesn’t exist is a surefire recipe for disaster.

It’s a phenomenon we’ve seen elsewhere in the category, and is one explanation given by ecommerce experts for the fact that JustFab outcompeted ShoeDazzle and ShoeMint in the subscription shoe wars. The JustFab team is one of the very best around in performance marketing, critics of their tactics notwithstanding.

Pickwick found that its most effective customer acquisition channels were those more common in offline retail than online, according to Donahue. For example, physical pop-up shops and “try at home” programs converted exceptionally well, but were both time and resource intensive and difficult to scale. Even a mention as one of "Oprah's favorite things" wasn't enough to launch this rocketship. The same could be said for whatever bump it got from the Ashton Kutcher tie-in. The problem is, most ecommerce businesses are built to operate at large scale, where economies of scale kick in and everything from production to fulfillment to marketing gets cheaper on a unit basis. It’s an incredibly difficult sector in which to be a small fish.

“The more we looked at the business, the more it looked like a traditional fashion business,” Donahue says. “We still think there’s an opportunity in the boutique T-shirt category, but you would need to finance in a way that allows for slow grow, and that’s really the way Silicon Valley operates.”

Designer T-shirts has proven to be a difficult category. It’s not only Pickwick & Weller that ran into a wall trying to tackle this wardrobe staple, but JLo and Brian Lee’s Teeology as well. Those who have succeeded, like Teespring and Threadless, have done so by building distribution and crowdsourced design platforms, rather than unique online brands. In many ways it’s the exact opposite of the trends we’ve seen in other categories like footwear, eyewear, suiting, and lingerie.

Given the feedback Pickwick received from the market, Green isn't optimistic about the next great T-shirt ecommerce business, saying, "I think it would be extraordinarily hard to build a company in this category. You need to have product differentiation and a unique value proposition in order to get something off the ground and get to a level of core customer mindshare. It needs to be worth chatting about and covering in the media. Non-logo T-shirts are not something people are talking about constantly and the 'Made in America' angle is not that unique."

Pickwick had a number of notable investors – including those who have been early backers of Birchbox, One Kings Lane, Fab, Bonobos, Threadflip, Harry's, Dollar Shave Club, Wanelo, and Shopify on the ecommerce front – meaning that it wasn’t for lack of smart people in the room that this venture failed. It appears simply to be a combination of faulty assumptions – most notably around market demand – and ineffective execution in customer acquisition.

“[When looking at this deal] we thought that it’s basics: everyone has 20-30 T-shirts in their closet and wouldn’t it be wonderful to have a favorite brand that you could go back to time and time again," Green says. "I think now, the reality is, that sounds good but that’s not how people behave. At a sub-$50 price point, people experiment with T-shirts – it’s sorta like girls' lipstick.”

Regardless of where things went wrong, we can add Pickwick & Weller to the mounting list of companies that have reminded us that ecommerce is an exceptionally hard category. Donahue and Green stand out for their openness in discussing publicly what they learned from this experience, something most founders do anything to avoid.

“I’m totally comfortable with owning this,” Donahue says. “Far too many people dodge this conversation, but I'm willing to say I failed, I learned a lot, and move on.”