Bitcoin Jesus: "I'm not fine. 10 point emergency! All my stuff is getting hacked!"

Roger Ver, a prominent bitcoin angel investor referred to casually as “bitcoin Jesus” in crypto-currency circles, had what he called a 10-point emergency last night.

Ver, who lives in Singapore, sent out a series of Tweets and Facebook messages around 3:30am PT last night alerting his network that he was personally facing a massive hacking attempt. He first posted to his Facebook asking his friends if anyone knew the contact info for Patrick Khajehtoorian, a San Francisco based Internet entrepreneur, to could “wake him up right now!!!!!” 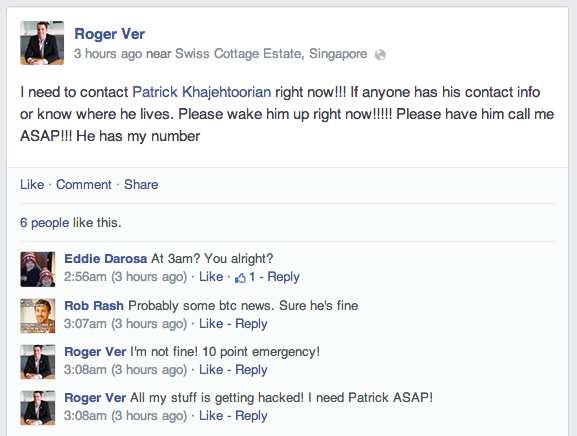 Roughly an hour later Ver issued a bounty of approximately $20,000 on the head of the hacker behind the attack – who he identified only as using the Skype ID nitrous – broadcasting his message through both Facebook and Twitter.

Ver later told crypto-currency news outlet Coindesk that the hacker quickly “gave up and gave me the password to all the hacked accounts” once he learned of the bounty.

The hacker was apparently able to gain control of both old email and Facebook accounts that Ver no longer uses and use those to conduct his attack. Ver credited his “friends at wiz.biz,” a Tokyo-based enterprise security software company, for helping him to quickly lock down all his accounts. Ver promised to post the full details of the attack once he finished thoroughly locking down his digital life.

It’s unknown just how much bitcoin wealth Ver has accumulated, but it was enough in November 2013, when bitcoin was near its all time peak of $1,200, for the entrepreneur and angel investor to donate $1 million worth of bitcoins to charity.

It seems like crisis was averted in this case, but it reinforces just how much of a target bitcoin wealth has become. Attacks on bitcoin businesses, like Mt. Gox, and individual users alike are sure to continue as long as there is easy money to be made. The pseudonymous nature of crypto-currencies and the ease of transporting them makes such attacks far more attractive than robbing a traditional bank or a person on the street.

The timing of this attack is ironic, as it follows just days after an alarming screed published by technology and hacker journalist Quinn Norton, in which she writes:

It’s hard to explain to regular people how much technology barely works, how much the infrastructure of our lives is held together by the IT equivalent of baling wire.

Computers, and computing, are broken. The bitcoin community’s greatest challenge, should it hope to become a mainstream technology, is to make it simple, reliable, and secure for everyday consumers to use. It’s a difficult problem with no obvious solution, but a number of smart people at companies like Circle, Coinbase, Blockchain, SecondMarket, and others are tackling it as we speak.

Roger Ver’s bitcoins appear safe at the moment. But are yours?