In the takedown requests, which were published on ChillingEffects.org, Russia accuses Twitter users “@PravyjSektorRus” and "@John_Wayne_007" of extremism and inciting violence — and demands that Twitter remove the offending accounts/material in accordance with a Russian law that bans Internet companies from hosting content that “contains appeals to riots, extremist activities, participation in mass action designed to break the law…”

Indeed, both users' feeds are filled with extremist tweets and retweets, including calls to armed violence and gleeful posts about the deaths of anti-Kiev rebels. One tweet favorably quotes Chechen warlord/terrorist Shamil Basayev, who was responsible for a series of brutal terrorist attacks on Russian soil, including Moscow. Another tweet calls on people to join the ranks of Right Sector. 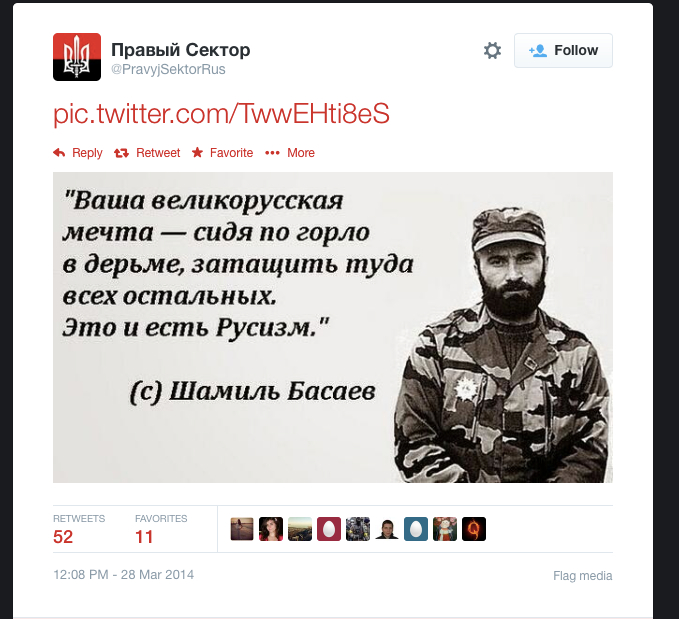 (Translation: "Your Great Russia dream — sitting up to your necks in shit and trying to drag everyone else in with you as well." — Shamil Basayev)

It's not immediately clear why Russia wants to block these two accounts in particular. Right Sector's mercenary combat units have been involved in deadly freelance military operations in east Ukraine. But the blocked accounts don't have that many followers or tweets, and I've certainly seen accounts that are nastier, more anti-Russian and much more violent.

We reached out to Twitter (~5 hours ago) and are still waiting for comment. But the company has clearly complied with Russia's requests. Users logging in from Russia now see a message telling them "This account has been withheld in: Russia."

Twitter first rolled out its official “micro-censorship policy” back in 2012. It now reserves the right to block tweets and/or accounts in certain countries in accordance with local law. Twitter argued that it was better to censor individual content than have the entire site blocked.

For the past two years, micro-censorship has been just another routine part of the job over at Twitter's HQ in San Francisco. Just yesterday, the New York Times reported on the company's censorship of “blasphemous” and “unethical” secular content in Pakistan…

At least five times this month, a Pakistani bureaucrat who works from a colonial-era barracks in Karachi, just down the street from the former home of his country’s secularist founder, Mohammed Ali Jinnah, asked Twitter to shield his compatriots from exposure to accounts, tweets or searches of the social network that he described as “blasphemous” or “unethical.”