Paging through the recent CB Insights statistical analysis, I noticed something odd:  Timehop. Timehop, the Spark Capital-backed, nostalgia-inducing app that reminds you what you did a year ago, has been rising rapidly through the App Store rankings in the past six months, ending up in the top forty. 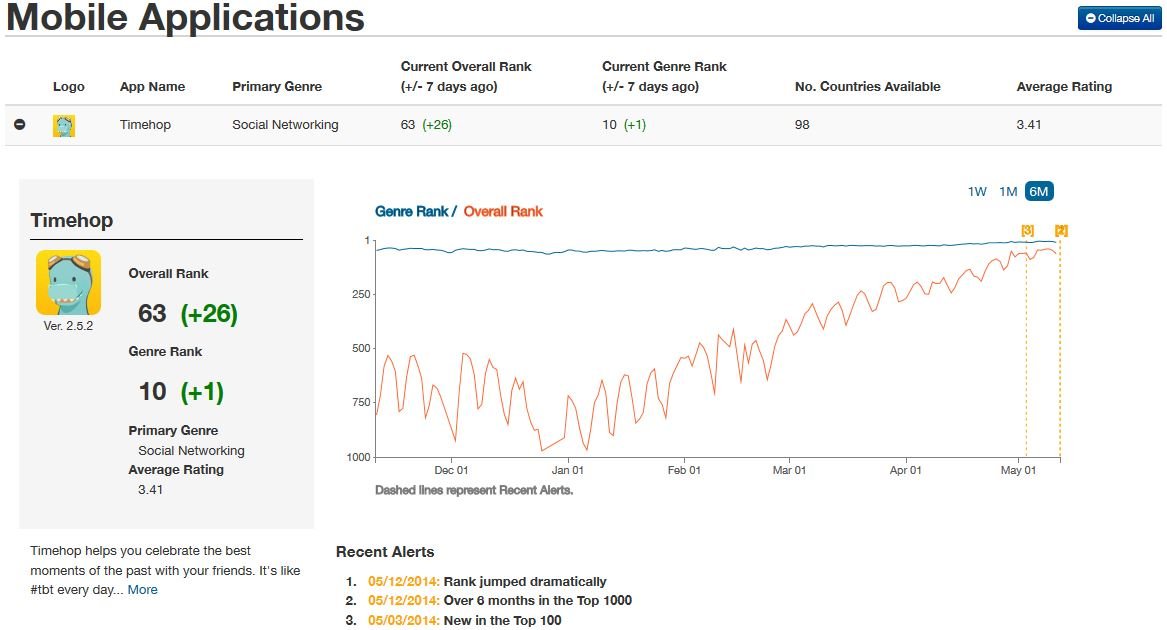 I asked  founder Jonathan Wegener to explain the jump and he told me something surprising. The increase in downloads is not the result of millions spent on user acquisition — Timehop has spent a whopping $0 in marketing — or a big press push. It’s good old fashioned, exponential growth.

User acquisition wasn’t always an easy, upwards trend for the company. In fact, Timehop has been around since 2011 without seeing that effect. The changes the company made to the product, bit by bit, feature by feature, over the past few years slowly corrected the course.

The app started out as an email, sent to people daily. That didn’t exactly facilitate viral sharing among networks. The Timehop co-founders underestimated the power of mobile, thinking it wouldn’t be worth the effort for the user. “It was a big question: Would people care enough to open an app everyday?” Wegener admits.

Once they did launch mobile, in October 2012, it took another full year to get the product working right. Their servers crashed constantly — almost every morning for a year — and the app had an embarrassing 1.5 star rating, with users saying “This app is great when it works but every time I open it I get an error message.” The Timehop team struggled switching from an email service to an app because they hadn’t developed the technology for the servers to handle inbound requests. “We do a holiday trip every year and the first year the engineers literally took their laptops skiing because they knew the servers would go down,” Wegener says.

He estimates that they got the technology working right around October 2013, which is, not surprisingly, half a year prior to CB Insights noting Timehop’s six month streak of growth.

Meanwhile, the company had been iterating, making small but important changes to the product. The crucial alteration was building the API system so that the Timehop app could immediately give a new user their Timehop for the day. “Between the time that you install the app and open it, the experience is ten seconds, so we have ten to twenty seconds to do all the importing work, tap the social networks, and scan your camera roll,” Wegener says. “It wasn’t in the first version of the mobile app — you would get the first Timehop the next day — and I think we lost a lot of users that way.”

They tested giving a portion of the population the option to scroll through old timehops — which was always available in the email version of the app. They quickly realized that user engagement plummeted. People didn’t open the app every day if they knew they could return to old Timehops later. The false sense of scarcity —if you didn’t check that day’s Timehop it was gone forever — improved user engagement.

Lastly, they made it easier to share with friends. When people would text or email a memory from the app, it would generate an embeddable widget so recipients could see the memory — and the Timehop logo — without having to click to an external URL.

With the app’s mobile technology in place, easy share buttons implemented, and servers that didn’t crash every five seconds, Timehop was finally in a position to spread organically from user to user.

“People come back [to Timehop] every single day, they screenshot and share it on Facebook and Twitter,” Wegener says. “If you look at the app store rankings it has been gradual and linear as we’ve grown from two users to over a million users.”

Startups take heed. If your product isn’t seeing organic growth, you just may not have hacked it right yet.