Here we go again. For the umteenth time in recent memory, the sanctity of the bitcoin network is facing an existential threat from a large and overly secretive organization. It’s not an exchange or wallet service this time around that has the attention of crypto-currency watchers, but rather a large mining pool, specifically GHash.io, the self-described world’s "#1 Crypto & Bitcoin Mining Pool."

So why is the bitcoin world up in arms over GHash? On several occasions last week, one lasting a full 12 hours, the group, which is owned by cloud-mining service CEX.io, controlled more than 50 percent of the global computational power directed at mining bitcoin.

With such control, GHash (or any group that finds itself in a similar position) could manipulate the integrity of the bitcoin network by potentially double-spending coins, blocking or reversing transactions by competing miners, extorting increased transaction processing fees from the network, or waging a distributed denial of service (DDoS) attack against the entire bitcoin network – collectively, a so-called “51 percent attack.” In other words, it’s a major threat to bitcoin’s foundational distributed, and therefore trustless, nature.

Cornell researchers Ittay Eyal and Emin Gün Sirer were the first to recognize the 51 percent event, calling it “armageddon” in a Friday blog post, and describing GHash as a “de facto monopoly.” The pair, who have long been thought leaders on the concepts of 51 percent attacks and “selfish mining,” write:

GHash is in a position to exercise complete control over which transactions appear on the blockchain and which miners reap mining rewards. They could keep 100% of the mining profits to themselves if they so chose. Bitcoin is currently an expensive distributed database under the control of a single entity, albeit one that requires constantly burning energy to maintain -- worst of all worlds.

It’s a historical first for any entity to cross the 50 percent threshold, although GHash has been close before, approaching 45 percent in January of this year. At the time, GHash issued a press release, publicly committing to never reaching the feared 51 percent threshold (really, anything greater than 50 percent). So much for that promise. 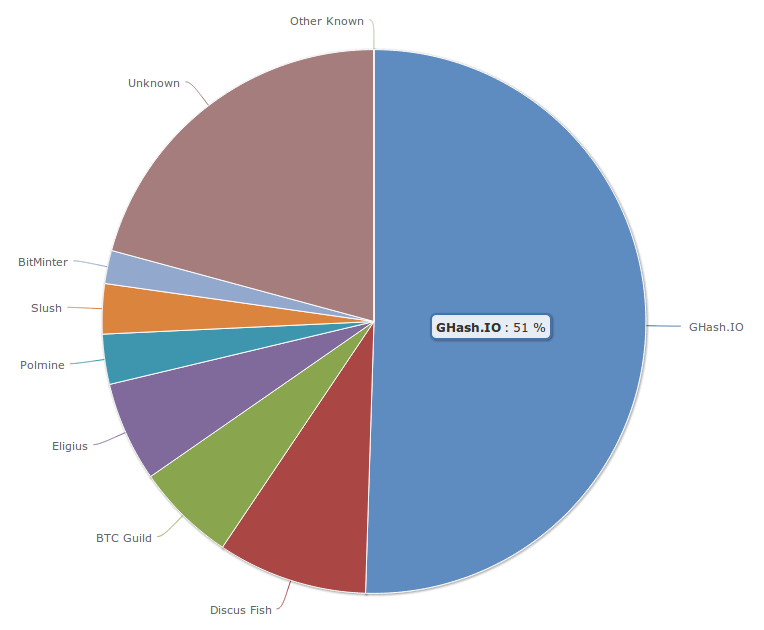 To be clear, GHash doesn’t own 50 percent of the global mining power, it simply “controls” it. This distinction is important, but does not necessarily eliminate the threat the group poses. GHash has in the past claimed to own only half the hardware providing the hashing power that it controls, with the rest contributed by third-party miners that allocate mining power to its pool. Nonetheless, the bitcoin network has reason to be fearful of this concentration of power.

Making matters worse, no one knows who is behind GHash or CEX. The owners of the Netherlands-based company (which lists a London mailing address) are notoriously secretive, meaning that the bitcoin community – which at this point represents several billion dollars in wealth and untold future value – are left trusting a shadowy entity not to behave badly with its newfound power.

To be clear, GHash has not abused its power yet. But if history's taught us anything it’s that power corrupts. Making matters worse, the company was previously accused of using its enormous size advantage to bully a gambling site via double-spending attacks.

No one knows the ultimate aims of GHash. The people who join the GHash pool do so because GHash has zero fees -- these people are essentially optimizing for short term profits over the long term well-being of the currency. All of these are precisely the points we cautioned about. So this is when we get to say "We told you so."

Or we can carry on as if nothing of importance happened. GHash will be on their best behavior for the next few weeks, and Bitcoin will limp along. What will bring the actual demise of Bitcoin is the subject of a future blog post, but this is by no means the end. People can still use Bitcoin to buy drugs, trinkets from Overstock.com, and maybe even grilled cheese from a food truck. There is an afterworld. And for everything else, there is dirty fiat and Mastercard.

As Eyal and Sirer point out, the potential of 51 percent attacks has been known for some time. As a whole, the bitcoin community leaders have been quick to write off the risks of such a scenario, offering two common justifications. First, we’re told that the investment required to create a mining pool would disincentivize a pool’s participants from ever conducting such an attack. But, as the Cornel report explains:

...[this] assumes a static world. Instead, the mining rigs have a fairly short useful lifetime. If a miner knows that they will be overtaken by the next generation of hardware about to be unleashed by a competing mining pool, it will have a definite time horizon for extracting every last bit of value, and that plan may not have room in it for a voyage to the moon.

Secondly, naysayers are quick to argue that the mining community and bitcoin’s core developers will easily recognize such an attack and will therefore prevent the bad actors from harming the broader bitcoin network. At best, this seems like an idealistic view of likely events. Even if such an attack were recognized and ultimately interrupted, the trust-eroding effects – both within the community, but more so within mainstream consumers and media – would be staggering. Assuming that no harm will come of even a brief 51 percent attack couldn’t be further from the truth.

The current scenario is troubling enough that respected bitcoin developer Peter Todd sold half his peronal bitcoin holdings over the weekend – representing “five-figures” worth of dollar wealth. Todd, who called this “a promise he’d made to himself a long time ago,” explained his decision in a Reddit post, writing:

...the economic incentives behind Bitcoin are probably very flawed, it might take a disaster to get the consensus to fix it, and if that happens I want to make sure I can pay my rent and buy food while we're fixing it.

Todd goes on to request that the bitcoin community, led by the core development team, implement changes that eliminate mining pools, enable miners to solo-mine with limited hashing power, and get rid of ASIC (application specific integrated circuit) miners. He concludes, writing:

Do I still think Bitcoin will succeed in the long run? Yes, but I'm a lot less sure of it than I used to be. I'm also very skeptical that any of the above will be implemented without a clear failure of the system happening first - there's just too many people, miners, developers, merchants, etc. whose heads are in the sand, or even for that matter, actively making the problem worse. If that failure happens it's quite likely that the Bitcoin price will drop to essentially nothing... I hope I'm on the wrong side of history here, but I'm a cautious guy and selling a significant chunk of bitcoins is just playing it safe; I'm not rich.

Bitcoin Foundation Board member and chief scientist, Gavin Andresen, took to the organization’s blog over the weekend to address “centralized mining” concerns.

Recently, mining power has become even more centralized, with one mining pool (GHash.IO) likely controlling somewhere between 40% and 60% of hashing power. That isn’t good, and if you are mining with GHash.IO I would strongly urge you to try one of the smaller pools, or, even better, take the time to run bitcoind and p2pool. But it isn’t disastrous, either.

Anderson argues that GHash would only be able to double-spend already confirmed transactions or prevent new transaction blocks from being accepted. He calls both attacks “extremely unlikely from an economically rational mining pool,” and predicts that anyone carrying them out would be caught and likely face legal ramifications for their misuse of power. It’s a very pragmatic, although not overly reassuring perspective.

Rather than reassure the unwashed masses that bitcoin is safe and welcoming, Anderson goes the other direction, writing, “this is a good time to re-iterate my standard disclaimers: Bitcoin is still a work in progress, and you should only risk time or money on it that you can afford to lose. Mining centralization is one of several potential risks.”

...we would never do anything to harm the Bitcoin economy; we believe in it. We have invested all our effort, time and money into the development of the Bitcoin economy. We agree that mining should be decentralized, but you cannot blame GHash.IO for being the #1 mining pool.

Bitcoin was created specifically to avoid the need to trust any centralized authority, be it a federal government, the Federal Reserve, the World Bank, or otherwise. The fact that the crypto-currency community is now confronting this scenario is a legitimate threat to the entire experiment.

The broader market seems to agree with this concern, pushing the price of bitcoin down more than 16 percent in a few days, from a near-term high of $655 on Tuesday, June 10 to a low of $553 on Sunday the 15th – currently, the Coindesk Price Index sits at $589. This drop follows a recent upswing in price following a prolonged bear market that coincided with the collapse of Mt. Gox. As of this moment, GHash controls roughly 35 percent of global hashing power while the next largest known group, Discus Fish, controls 16 percent.

GHash doesn’t need to conduct a 51 percent attack for their hashing power concentration to be a major issue. The simple fact that the bitcoin network must look over its shoulder to wonder if (or when) such an attack will arrive is enough to destabilize the system.